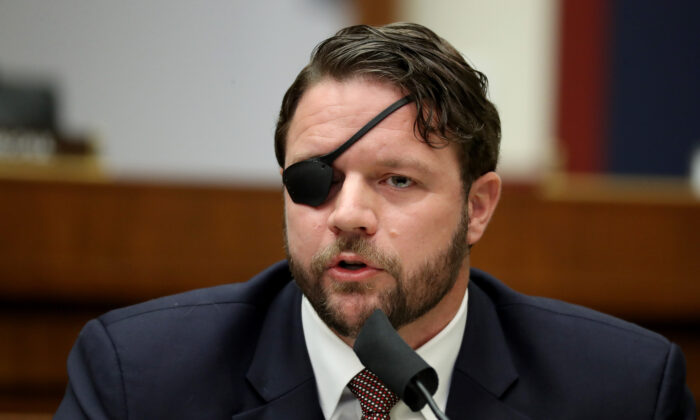 ‘We Are Going to Expose You’: Crenshaw, Cotton Create Military Whistleblower Site to Combat ‘Woke Ideology’

Two Republican lawmakers have begun a campaign that calls on whistleblowers in the military to come forward with their experiences in training programs that promote critical race theory or “diversity, equity, and inclusion.”

“We won’t let our military fall to woke ideology,” Rep. Dan Crenshaw (R-Texas), a former Navy SEAL, wrote in a tweet on May 28, linking to a website where informants can submit their accounts. “With written permission, we will anonymously publish egregious complaints on social media and tell the country what’s happening in our military.

“For too long, progressive Pentagon staffers have been calling the shots for our warfighters,” he said.

The web page was posted in conjunction with Sen. Tom Cotton (R-Ark.), a former Army captain. They hope that service members “will anonymously publish egregious complaints on social media” in order to “tell the country what’s happening in our military,” Crenshaw said.

“Spineless military commanders have let it happen. Now we are going to expose you.”

Earlier this month, the U.S. Space Force confirmed it relieved Lt. Col. Matthew Lohmeier of his duties after he alleged that Marxism and critical race theory—which draws inspiration heavily from Marxist critical theory—are both being spread in the military via training courses that are required by Department of Defense Secretary Lloyd Austin and other high-level officials.

“Lt. Gen. Stephen Whiting, Space Operations Command commander, relieved Lt. Col. Matthew Lohmeier of command of the 11th Space Warning Squadron, Buckley Air Force Base, Colorado, May 14, due to loss of trust and confidence in his ability to lead,” the Space Force said in mid-May, adding that Lohmeier’s remarks in a podcast and in his self-published book “constituted prohibited partisan political activity.”

Lohmeier last week met with Cotton, who wrote on Twitter after their meeting, “I was concerned by what I heard and will be pressing senior military leaders for answers.”

Critical race theory denounces U.S. and Western culture as a systematic form of oppression that negatively affects minority groups. Critics of the ideology—which is sometimes referred to as being “woke”—have said its proponents apply the Marxist tactic of “class struggle” to divide people along lines of race, gender, and ethnicity to label them “oppressors” and “oppressed.”

At the state level, legislatures and governors have taken action against critical race theory as well as The New York Times’ “1619 Project,” by barring them from being taught or promoted in schools and in government institutions.

The governors of Tennessee, Idaho, Arkansas, and Oklahoma have already signed bans of critical race theory in public schools. In Texas, Arizona, and Iowa, similar measures have been proposed, according to an analysis.