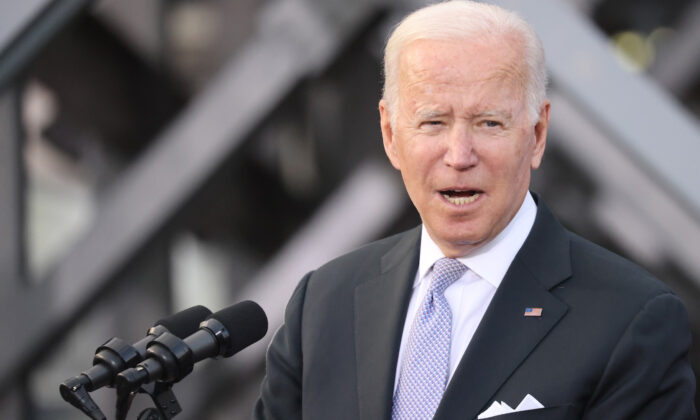 The Washington Post has corrected a story that falsely stated a crowd at a recent speech was chanting “Let’s Go Brandon.”

The crowd was actually chanting “[expletive] Joe Biden,” according to video footage of the speech, which was delivered by Donald Trump Jr. in Georgia last month.

The original story said that Trump Jr. took the stage and cued the crowd, which “broke into cries of ‘Let’s Go Brandon.'”

The corrected story says that the crowd “broke into cries of ‘[expletive] Joe Biden!'”

An editor put the false information in the original story, according to the Amazon-owned paper.

“The error, which was inserted by an editor, has been corrected,” it stated.

Trump Jr. responded on Twitter, writing, “This is the greatest correction in the history of journalism!”

The situation reminded some of the origin of the “Let’s Go Brandon” chant, which actually originated over a week after the Georgia speech.

NBC reporter Kelli Stavest was covering a NASCAR race at Talladega Superspeedway in Alabama on Oct. 2. As she interviewed the winner, Brandon Brown, the crowd could be heard in the background chanting “[expletive] Joe Biden.”

“As you can hear the chants from the crowd, ‘Let’s Go Brandon,'” Stavest said.

The chant quickly gained popularity as a family-friendly signal of opposition against Biden. It’s been used widely in real-world situations and on social media.

Neither Stavest nor NBC Sports have appeared to correct the false information she gave to viewers. Stavest could not be reached and NBC Sports did not respond to requests for comment.

Andrew Bates, a White House spokesman, told the Post that he had not been aware of the “Let’s Go Brandon” chants until the paper asked him about them.

“I had never heard of that chant until you explained it to me,” he said. “I guess I’m not spending enough time on 8chan or whatever,” he added, referring to an internet forum.

The president appeared familiar with the more vulgar version during an early October visit to Michigan. Some residents held signs with the chant as Biden traveled in the area.

“Notwithstanding some of the signs that I saw, that’s why 81 million Americans voted for me,” he added.