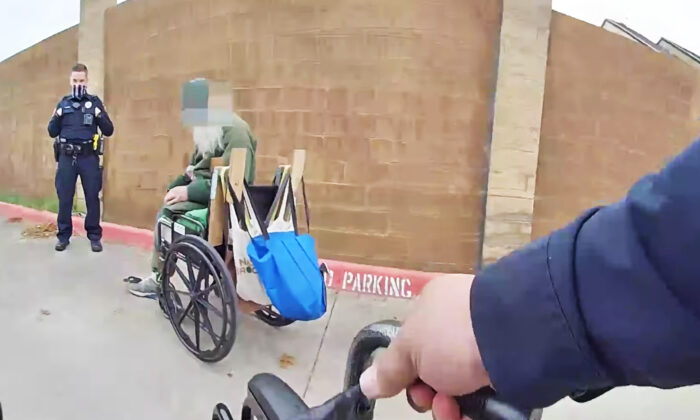 During a routine audit of body camera footage, a Texas police department caught one of their officers performing an act of unprecedented kindness.

A Carrollton police officer, who has requested to remain anonymous, used his own money to buy a new wheelchair for a homeless man in dire straits.

The bodycam footage shows the officer purchasing a brand-new set of wheels from a local pharmacy before presenting it to the grateful stranger.

The officer responded to a call expressing concern for a disabled man, stranded at the junction of Old Denton Road and Rosemeade Parkway, who was trying in vain to fix his broken chair.

The officer called a local pharmacy before driving there to collect the chair. In bodycam footage, a pharmacy staffer can be heard praising him for his kind deed.

The homeless man, upon receiving his upgraded chair, asks what he owes the officer. “Nothing. This is for you,” comes the reply.

The Carrollton Texas police department shared the footage on their Facebook page.

“BUSTED,” the department wrote. “During a routine audit of body camera videos, we stumbled across this welfare concern call on [Nov. 28].”

“Callers had reported that a man’s wheelchair, which is also his ‘home,’ had apparently broken down and left him stranded. We will let Officer Anonymous remain just that, but we had to share,” they wrote.

Thousands responded to the officer’s generosity on social media, many touched by his decision to go above and beyond the call of duty without recognition.

“This officer have a big heart! We need to commend his actions,” wrote one social media user.

“What a great representation of our city,” wrote another. “Thank you all for what you do for us!”