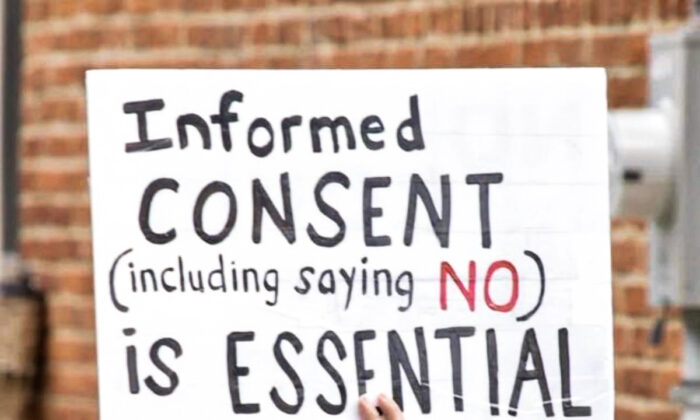 Have you had your COVID-19 vaccination?

This has become a loaded question with implications beyond health.

A Pennsylvania lawsuit argues that receiving or declining a vaccine has become a political act, and when employers compel employees to get vaccinated, they are forcing employees to engage in political speech, a violation of the First Amendment, the freedom of speech.

The suit was filed in October in federal court in the Eastern District of Pennsylvania by attorney Bruce L. Castor, Jr. of the law firm Van Der Veen, Hartshorn & Levin, on behalf of his clients Pennsylvania Informed Consent Advocates Inc., which is a recently organized group of employees of the University of Pennsylvania Health System (Penn Medicine), one of the largest employers in Pennsylvania.

Castor is a well-known attorney, having served briefly as acting Pennsylvania attorney general. He was the lead defense attorney in President Donald Trump’s 2021 impeachment trial, and he was Montgomery County District Attorney in 2005 when comedian Bill Cosby’s sexual assault case came to light there.

Castor argues that by requiring workers across the United States to disclose their vaccination status, Ketcham and Becerra are forcing workers to engage in un-sought-out and individually undesirable political speech in violation of the First Amendment. And by choosing to abide by federal vaccine mandates, Penn Medicine has become an agent of the federal government, likewise violating the First Amendment.

“Employers think they are holding the upper hand because they have unlimited resources for legal fees and employees don’t,” Castor told The Epoch Times in a phone interview. “But since they all have the same issue, we formed a corporation, so they became a legal person—an entity that can bring a suit. It levels the playing field.”

Pennsylvania Informed Consent Advocates Inc. is made up of between 100 and 200 Penn Medicine employees who pool their money for legal fees.

“Disclosing one’s status as not vaccinated against COVID-19 has become politicized in such a way that the expressing of one’s opposition has acquired a political meaning: bringing public derision down upon the individual or, in fewer instances, garnering public acclaim for the individual, largely depending on the political beliefs of the public toward coerced governmental action against its citizens,” the court papers say. “Because of its intensely toxic political nature, disclosing one’s COVID-19 vaccination status holds the intent, weight, and social effect of partisan political speech, and should be treated as such.”

When Penn Medicine asks for proof of vaccination as a pre-requisite for further employment, it outs some employees as unvaccinated, which can publicly stigmatize them by causing some to equate their position with political “rightwing extremists,” or other stereotypes, even if the employee’s objection is religious or due to medical risk, the suit argues.

“The mandate seeks to require Plaintiff members to make a political statement against their will, and potentially against their health and well-being, and subjecting them to public ridicule and contempt,” court papers say.

“We’re not saying there is not a competing interest that the government has in keeping people safe,” Castor said. “We’re saying there has to be a balance of that and individual freedoms for the people who are choosing not to be vaccinated.”

“You can’t compel people to state what their vaccination status is because it has become political,” Castor said. “Eventually you will get a court high enough to say vaccine mandates are prohibited absent some reasonable effort to accommodate individual liberties. And deciding what individual liberties are protected will be the question. It will be something like wearing masks or working from home.”

In May, all Penn Medicine and Lancaster General Hospital employees were informed by email that unless they receive the COVID-19 vaccine, they would lose their job in three months.

Additionally, some students had a contract with the Pennsylvania College of Health Sciences that had them start working for Lancaster General Hospital in high school, move on to nursing school, and then after graduating; owe Lancaster General Hospital (a Penn Medicine property) one year of employment as a registered nurse, for which they receive a 75 percent tuition break. The agreement says that if for any reason they are terminated, they must pay the tuition back. These young employees had to choose between taking the vaccine or repaying that 75 percent tuition reimbursement in three months.

“You can’t imagine the range of regulations that companies are putting on employees,” Castor said.

The suit asks the court to make Penn Medicine stop using proof of vaccination as a condition for employment and prevent Becerra and Ketcham from enforcing the mandate as long as they are in violation of the first (free speech) and fourteenth (equal protection of the law) amendments. It also asks for Penn Medicine to give employees their jobs back and provide compensatory damages for their losses and legal fees.

“Penn Medicine is put at great risk,” Castor said. “There is a huge number of people with highly paid jobs. Penn Medicine would be liable for all that back pay, benefits, punitive damages, attorneys fees—it adds up to big money.” And if the court agrees with employees, similar cases could spread across the country. It would affect employers differently, based on what level of reasonableness they act on, Castor said. Employers who change union contracts, go straight to termination, or make ridiculous rules would not fare as well as those that provide both protection to vaccinated employees and reasonable accommodations to those who choose not to get vaccinated.

By telling workers they must put something in their body that they don’t want, Castor said, the government causes an immediate, visceral, negative reaction.
“They say, how dare the government put my family at risk by threatening my job as we go into winter.”

“Where are all the pro-choice advocates who use the mantra, ‘my body my choice’? It’s very strange to me.”