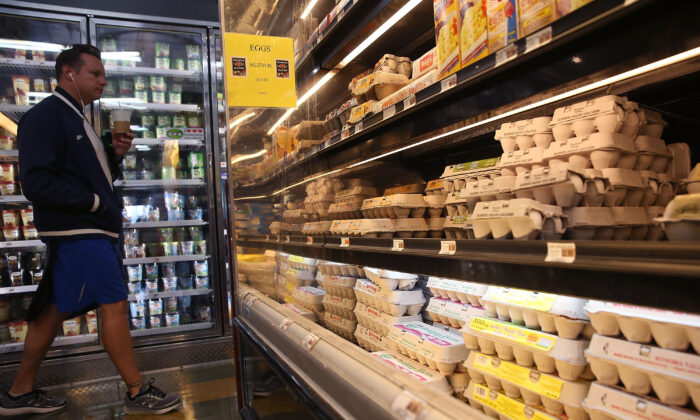 Cartons of eggs are displayed on a shelf at the Marina Supermarket in San Francisco, Calif., on July 17, 2015. (Justin Sullivan/Getty Images)
Inflation

US Inflation at Nearly Four-Decade High: Here’s What is Getting Most Expensive

As the U.S. annual inflation rate climbed to 7 percent in December, the highest level since June 1982, new data show that almost every category was higher in the 12 months ending in December.

Close to every food item cost more last month compared to the same time a year ago, including meat and fruits and vegetables.

In the overall category of meat, poultry, fish, and eggs prices swelled 12.5 percent.

Energy prices eased on a month-over-month basis, but they were still high compared to the same time last year.

Throughout the U.S. economy, nearly everything was more expensive last month. Some of the items in the marketplace that fell included wireless telephone services (-0.3 percent), health insurance (-1.2 percent), audio equipment (-5 percent), and girls’ apparel (-2.5 percent).

Economists surveyed by Dow Jones had anticipated that the widely followed inflation gauge would come in at 7 percent.

The core inflation rate, which strips the volatile food and energy sectors, advanced 5.5 percent year-over-year, according to the Bureau of Labor Statistics.

Every index was higher in the 12 months ending in December.

Is this the peak of inflation? This is the expectation, although it is likely to stay above 3 percent throughout the year, says James Knightley, the chief international economist at ING.

“The assumption is that supply chain strains will start to ease from the summer onwards while the upside impetus from housing should fade as rising mortgage rates bite. Higher borrowing costs in general should start to take some of the steam out of the economy,” he said in a note. “Then there is the prospect of outright falls in some components, such as second-hand car prices, which are up by more than 50%. As the global chip shortages ease we should see more availability for new vehicles and second-hand car prices could fall sharply.”

The official PCE price index reading is scheduled for release on January 28.

At the opening bell, the leading benchmark indexes had dismissed the red-hot inflation numbers.

The Federal Reserve is closely monitoring the inflation situation as the figures will guide its direction on interest rates. During his re-nomination hearing in front of the Senate Banking Committee, Fed Chair Jerome Powell revealed that rate hikes and tighter monetary policy would be necessary to combat inflation.

“If we see inflation persisting at high levels longer than expected, then if we have to raise interest more over time, we will,” Powell said. “We will use our tools to get inflation back.”

While the Fed’s dot-plot projects three rate hikes in 2022, Goldman Sachs is penciling in four increases this year: March, June, September, and December.

Before the latest CPI data, analysts at Wells Fargo noted that if price inflation stood at 7 percent, it would be challenging for “the Fed to stand idly by.”

“Although the exceptional pace of goods inflation and momentum in shelter costs are still firmly rooted in the pandemic, the increasingly tight labor market and ensuing wage pressures will make it difficult for inflation to fall back on its own,” the bank stated in a note. “The FOMC has been discussing a more aggressive response to inflation in recent weeks, and with the core CPI still likely to be around 4% by the end of the year, we do not believe it will end up being just talk. If CPI inflation is still around 7% heading into the March meeting, as we expect it to be, it will be hard for the Fed to stand by idly.”

Last week, speaking after the release of the disappointing December jobs report, President Joe Biden stated that he is “confident” the central bank will grapple with inflation while maintaining economic growth.

“I want to be clear: I’m confident the Federal Reserve will act to achieve their dual goals of full employment and stable prices and make sure the price increases do not become entrenched over a long term, with the independence that they need,” he said at the White House.

The Biden administration has introduced a series of policy measures to rein in four-decade high price inflation, including tapping the nation’s strategic petroleum reserves and allocating $500 million to smaller independent food processors.

Industrial production and manufacturing output will also be published, with market analysts forecasting monthly growth of 0.3 percent and 0.5 percent, respectively.

The University of Michigan will provide its preliminary numbers for January. Consumer sentiment is predicted to ease this month.