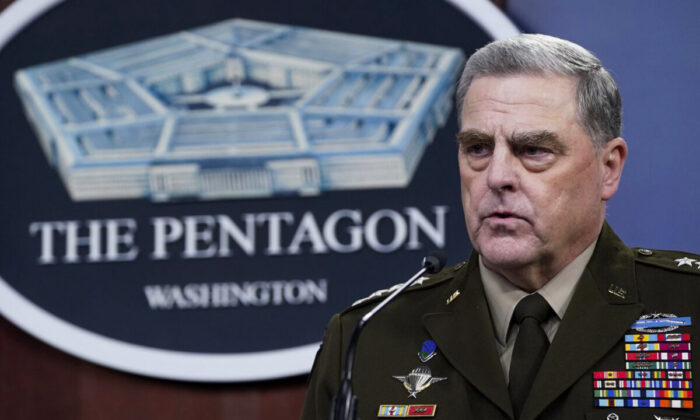 Joint Chiefs of Staff Chairman Gen. Mark Milley speaks during a briefing with Secretary of Defense Lloyd Austin at the Pentagon in Washington on Sept. 1, 2021. (Susan Walsh/AP Photo)
US News

US General: ‘Possible’ to Work With Taliban in Future

The U.S. military may work with the Taliban terrorist group in the future, the military’s top officer said Wednesday.

Asked if the United States would coordinate with the Taliban against ISIS in the future, Gen. Mark Milley said that it was “possible.”

“Going going forward, I would not want to make any predictions,” added Defense Secretary Lloyd Austin.

“I would tell you that we’re going to do everything that we can to make sure we remain focused on ISIS-K—understand that network and, at the time of our choosing in the future, hold them accountable for what they’ve done,” he said, referring to an ISIS affiliate that has claimed responsibility for the Aug. 26 suicide bombing attack on U.S. troops in Kabul.

The Taliban gained control of Afghanistan in mid-August after defeating U.S.-backed Afghan forces, following the withdrawal of most U.S. troops from the country.

The United States rushed thousands of service members back into Kabul, but only to secure the airport there and enable the evacuation of what turned out to be some 122,000 people.

While U.S. troops held the airport during the evacuations, Taliban terrorists controlled the exterior of the facility. The United States openly cooperated with the terrorist group, even sharing the identities of some Americans who wanted to flee the country so they’d be let through checkpoints.

The United States was relying on the Taliban “to protect us,” Gen. Kenneth McKenzie Jr., the commander of U.S. Central Command, said in a briefing last week.

The Pentagon at one point confirmed that a small number of Americans were beaten by Taliban fighters.

“It’s outrageous to think that we would put the safety of Americans in the hands of the Taliban,” Sen. Steve Daines (R-Mont.) said last week.

U.S. officials have defended the arrangement, claiming it was necessary to ensure large numbers of people were evacuated.

“We don’t know what the future of the Taliban is. But I can tell you from personal experience, that this is a ruthless group from the past, and whether or not they change remains to be seen,” Milley, the chairman of the Joint Chiefs of Staff said Wednesday.

“And as far as our dealings with them at that airfield, or in the past year or so, in war, you do what you must in order to reduce risk to mission and force—not what you necessarily want to do,” he said.

The U.S. government and military has received criticism from both parties for leaving as many as 200 Americans in Afghanistan when troops left on Aug. 30, including up to 30 primary school students from California.

Austin, pressed on what could have been done better, acknowledged that no operation is perfect but hesitated to identify any shortcomings until an after-action review is done. Milley defended the Aug. 29 drone strike that left multiple civilians dead, calling it a “righteous strike” and asserting that procedures were followed and that at least one ISIS member was killed.

Officials also gave the first concrete number in days on how many Afghan refugees are now on U.S. soil after being flown from Kabul.

Approximately 20,000 Afghans are being housed at eight different military bases in the United States as of Wednesday morning.

Another 43,007 are at staging bases in nine different countries, including four European countries.

Austin called the evacuation “historic” and expressed pride for what U.S. troops accomplished.

“We have just concluded the largest air evacuation of civilians in American history. It was heroic. It was historic. And I hope that all Americans will unite to thank our service members for their courage and their compassion,” he said.