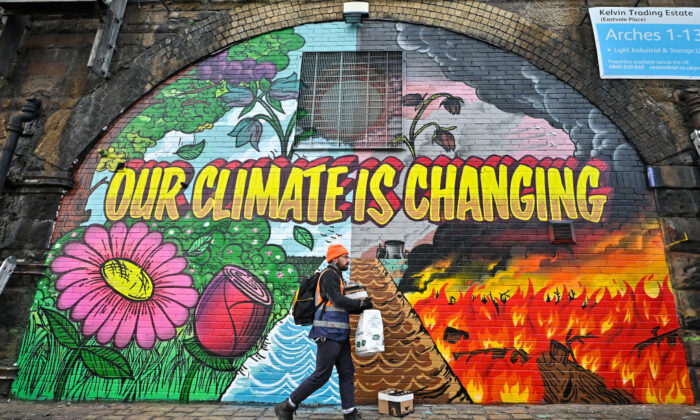 Artists paint a mural on a a wall next to the Clydeside Expressway near Scottish Events Centre (SEC) which will be hosting the COP26 UN Climate Summit in Glasgow, Scotland, on Oct. 13, 2021. (Jeff J Mitchell/Getty Images)
Viewpoints

The U.N. climate change conference in Glasgow (COP26) is great news for corrupt governments in the developing world because it looks set to transfer huge sums of money into their hands.

Dambisa Moyo, a Zambian-born economist, has long warned the West against sending aid to Africa because of the corruption it creates.

Warnings by Moyo, and others, have helped reduce the flows of foreign aid to third world governments know to be kleptocracies. But that has simply meant corrupt governments have had to work harder to get the West to send them money.

How have they done this? The method that has been widely used is playing the guilt card or the victim card.

The guilt card tells Westerners they should feel guilty because European empires and colonialism allegedly exploited the third world. But, unfortunately, the Left has so widely propagated this anticolonial mythology that it is becoming almost impossible to have a sensible discussion about the age of imperialism.

The victim card tells Westerners that the developing world is full of poor and starving people because villainous Western capitalists exploit them. Unfortunately, this socialist myth has been sold to many well-meaning but naïve, liberals through journalists and celebrities, or by screening heart-wrenching and sensationalist television images.

Since well-meaning liberals lack personal experience of the third world, they have no reality against which to measure the myths fed to them by left-leaning media and educators.

Playing the guilt and victims cards have also been routinely used by leaders of multilateral organizations like the U.N. and WHO.

Sadly, this sort of aid is especially likely to lead to corruption—just as it did during the Cold War.

But now we are facing a new explosion of third world corruption, caused this time by the way Greens have successfully mobilized the politics of climate change. If governments in Africa and Asia get their way, the Glasgow conference on climate change will transfer huge amounts of money into their hands.

With the Glasgow summit in mind, the South African government (known for its corruption) has promised to go beyond its Paris greenhouse gas targets.

But there is a catch—along with other third world elites, South Africa expects taxpayers in the West to pay them to implement their targets.

So we see the South African government, a well-known kleptocrat regime, brazenly asking the developed world to hand over to them $269 billion to pay for proposed decarbonization projects. The South African document lodged with the U.N. said “substantial multilateral support” would be required for measures such as “a very ambitious power sector investment plan.”

So Glasgow funds will be used to fix South Africa’s broken Eskom electricity supply system, plus fix the country’s catastrophic debt-repayment problem created by Eskom’s corruption and maladministration. Eskom has been unable to supply the country with enough electricity since 2007.

Further, ending the country’s energy crisis by building giant new power plants at Medupi and Kusile failed because of corruption, looting, and planning incompetence. Glasgow funds could fix all these problems, but it would also provide new corruption opportunities.

Effectively, the developing world is putting forward yet another neo-socialist wealth transfer scheme, but this one is dressed up in the language of saving the planet from climate change.

Western governments are being asked to transfer billions (if not trillions) of dollars from Western taxpayers to developing world elites so they can meet over-blown targets.

There are two problems with this. Firstly, the developing world has a record of poor governance, meaning these governments can seldom deliver on promises or targets. Even worse, developing world elites generally spend the foreign aid monies they receive to enrich themselves rather than to actually build the intended projects.

So the reality is, the U.N. climate change conference in Glasgow looks set to become just another mechanism to feed the corrupt gravy train that third world elites have been running for decades. Far from paying for green decarbonization projects, any wealth transfers flowing from Glasgow are more likely to end up buying four-wheel drives for the children of the third world elites.

To understand what is likely to happen to the $269 billion for climate change projects asked for by the South Africans, one only needs to look at what happened to their $4.3 billion COVID-19 relief funding from the IMF. One corrupt government Minister alone was involved in COVID-19 fraud valued at $10 million, while other politicians and African National Congress-aligned cronies looted another $700 million out of PPE funds.

If South Africa’s elite were even prepared to steal from funds geared to saving lives by fixing a health system shattered by COVID-19, imagine what they would do with climate change aid (where no lives are at stake).

By bringing together third world elites carrying begging bowls with Western greens which are willing to be taken advantage of, the U.N. climate change summit seems almost certain to deliver a bonanza for all those corrupt elites with a legacy of running gravy trains.

But this still begs the question; will Western governments ever learn?