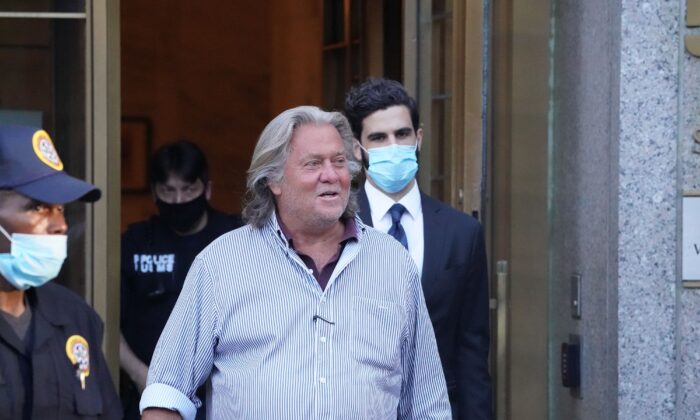 Former Trump administration adviser Steve Bannon was indicted Friday by a federal grand jury on two counts of contempt of Congress after he didn’t comply with a subpoena to appear in front of the House Jan. 6 panel.

Bannon, 67, was charged (pdf) with one contempt count involving his refusal to appear for a deposition and another that involved his refusal to hand over documents to the committee. Last month, the House select committee issued a subpoena before the House of Representatives, in a partisan vote, held him in contempt.

“Since my first day in office, I have promised Justice Department employees that together we would show the American people by word and deed that the department adheres to the rule of law, follows the facts and the law, and pursues equal justice under the law,” Attorney General Merrick B. Garland said in a news release issued by the Department of Justice. “Today’s charges reflect the department’s steadfast commitment to these principles.”

For each count of contempt of Congress, Bannon faces 30 days to one year in jail, as well as a fine of $100 to $1,000, according to the Justice Department’s press release.

According to the Congressional Research Service, it’s rare for prosecutors to charge someone with contempt of Congress, and it noted that a settlement is generally negotiated to avoid them. The last criminal contempt case was in 1983 when the Department of Justice indicted an Environmental Protection Agency official who was ultimately found not guilty during a trial.

Bannon’s lawyer, Robert Costello, told the House committee last month that he wouldn’t be cooperating because he had been told not to by former President Donald Trump. Arguing that “the executive privileges belong to President Trump,” Costello asserted that “we must accept [Trump’s] direction and honor his invocation of executive privilege.”

President Joe Biden’s administration has declined to assert executive privilege relating to documents and witnesses related to the Jan. 6 incident. At one point, Biden added a complication by saying that the Department of Justice should prosecute Bannon and others, before acknowledging that he shouldn’t have said it.

Later, a Department of Justice spokesperson told media outlets on Oct. 15 that in reference to Biden’s comment, the agency “will make its own independent decisions in all prosecutions based solely on the facts and the law. Period. Full stop.”

So far, the committee has issued subpoenas to more than a dozen former Trump administration officials and associates—including former adviser Stephen Miller, ex-national security adviser Michael Flynn, and White House press secretary Kayleigh McEnany—for testimony or documents. Among those who were issued subpoenas, former White House chief of staff Mark Meadows confirmed on Thursday that he would refuse the subpoena and would not testify in front of the House panel.

Meadows is still “under the instructions of former President Trump to respect longstanding principles of executive privilege,” George Terwilliger, Meadows’s lawyer, said in a statement.

“Contrary to decades of consistent bipartisan opinions from the Justice Department that senior aides cannot be compelled by Congress to give testimony,” he added, “this is the first president to make no effort whatsoever to protect presidential communications from being the subject of compelled testimony.”