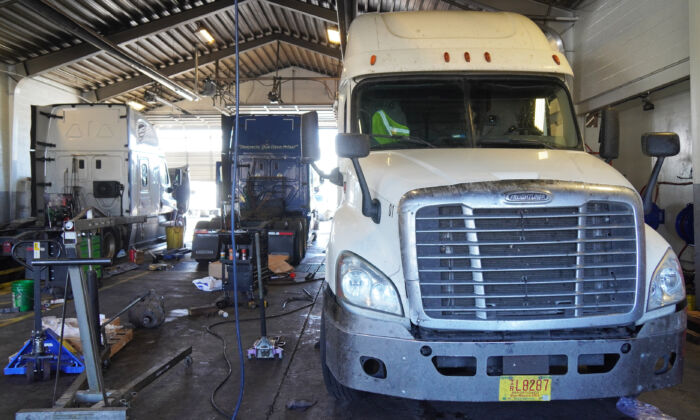 It’s a simple fact of life for the commercial trucking industry: Without replacement parts, the big semis stop rolling.

And when the trucks stop rolling, store shelves across the United States won’t be refilled with products.

“We’ve run into a situation where parts are just not available,” Benford said. “What we’ve started having to do is search anywhere [parts can be found]. We’re using vendors we’ve never had to before.”

Need a new water pump? That part could be weeks away on back-order.

The same thing goes for any part that uses a computer chip, due to the worsening global supply shortage of semiconductors.

At Rocky Mountain Truck Centers, a big white Freightliner semi that was parked in the service bay needed a new clutch, but even that part took longer to arrive.

“I don’t see us getting out of this any time soon,” Benford told The Epoch Times. “We believe it’s going to get worse over the next two years.”

“We’re having serious disruptions in parts supplies, there’s no question,” Downs told The Epoch Times. “Of course, anything with a chip is in really short supply these days.”

He said the shortage is due in part to cargo ships waiting to be off-loaded at ports of entry in California.

The situation is being made worse with overseas parts manufacturers having to shut down during the COVID-19 pandemic and then start back up.

And with the federal vaccine mandate for companies with more than 100 employees set to go into effect Jan. 4, that could spell more trouble for the parts supply chain, according to Downs. He said if the truck transport industry were to lose 30 or 40 percent of drivers because they refuse to take the vaccine—“then we go into panic mode.”

“Truckers are a pretty independent lot. They don’t like being mandated,” Downs said. “A lot of these guys will just quit driving a truck.”

As bad as the situation is now, it can only get worse with truck companies scrambling to find parts anywhere they can find them, he said.

Companies are already having to “cannibalize” parts from older semis, although parts from newer trucks aren’t as readily available at salvage yards, which are “doing more business than ever,” according to Downs.

“We’re seeing a change in a lot of the phone calls we’re getting,” Anderson said. “People have always been interested in keeping older trucks running.”

Anderson said 2007—and older—diesel-fuel trucks parts are more plentiful, since newer truck parts haven’t had time to accumulate yet.

With newer trucks (2015 or later) certain air quality sensors have a tendency to fail, causing some truck engines to not operate. To make matters worse, newer parts aren’t generally compatible with older trucks.

Still, he said it’s becoming more difficult to find parts for them, given the dwindling supply and increasing demand.

“We’ve seen the demand on these older trucks—enough to keep us busy,” he said.

John Elliott, chief executive of Load One in Michigan and vice chairman of the Truckload Carriers Association, said parts that are in short supply include turbochargers, air quality sensors, and batteries.

As a result, truck companies have been moving heaven and pavement to keep older trucks on the road, he said.

“We’ve never seen as bad a [parts] shortage in our company,” Elliott told The Epoch Times. “Unfortunately, it’s in the newer trucks with all the bells and whistles.”

Wait times for parts on back order are also taking longer than usual—sometimes three weeks or longer.

While larger truck transport companies are better equipped to weather these shortages, “it’s pretty much a perfect storm” for the industry as a whole, Elliott said.

“Everything I see and everyone I talk to says it’s going to get worse before it gets better. We haven’t seen the worst of it yet,” he said.

Cathy Roberson, president of Logistics Trends and Insights in Atlanta, noted that the log-jam of cargo ships along the west coast has made the demand for parts “crazy up.”

“The factories are having to play catch-up while the market is demanding more,” Roberson said. “The minute they produce [parts], they get snatched up.”

According to USA Trade Online, ocean freight imports of motor vehicle parts and accessories are up by 8.1 percent in 2021 versus 2019 and up by 40 percent versus 2020.

“It just shows the demand is so much,” Roberson said. “Semiconductor chip [shortages] impact every single industry.

“It’s not like you can just turn on the light switch and it’s all taken care of. This is going to take some time to unwind. The problem is, you’ve got to have trucks to move the parts.”

In the meantime, “everyone is freaking out,” according to Roberson.

“There’s going to be stuff on the shelves [but] those specific Nike shoes—you may not get those [in time for Christmas],” she said.

“Even before the pandemic, the situation was we had a shortage [of drivers],” Bradley said. “It’s an older workforce. We are doing everything we can to get [younger] drivers. The reality is, it’s difficult.”

“Even here, it’s just trying to hire people—and it’s all gone downhill,” Benford said. “I just don’t get it.”

Asked what the future may hold for truck parts, he laughed nervously.

“If we can’t get parts, we can’t fix vehicles. Then things are going to stop moving,” Benford said ominously.