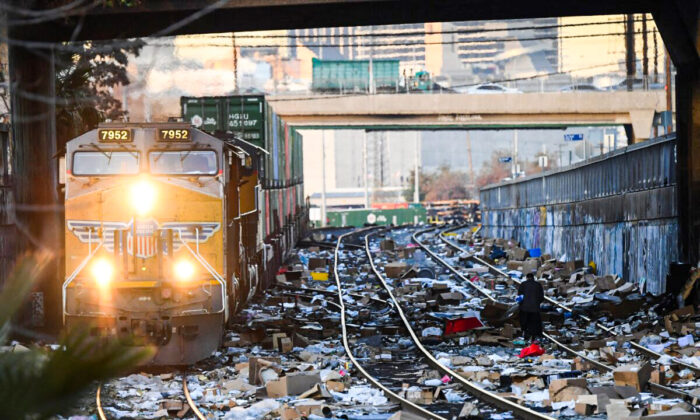 A person carries items collected from the train tracks as a Union Pacific locomotive passes through a section of Union Pacific train tracks littered with thousands of opened boxes and packages stolen from cargo shipping containers, targeted by thieves as the trains stop in downtown Los Angeles on Jan. 14, 2022. (Patrick T. Fallon/AFP via Getty Images)
US News

Instead of making train burglars think twice by threatening jail time, Los Angeles County has made the nation’s largest rail freight company reconsider sending goods through the area, according to a letter from the company.

Union Pacific (UP) sent a letter to Los Angeles District Attorney George Gascón stating that train burglaries in his jurisdiction increased by 356 percent from October 2020 to October 2021.

Burglary losses have been so high that the company is considering ceasing traffic through the county. FedEx and UPS also are trying to divert railroad shipping away from the area, according to the letter.

“We do not take this effort lightly, particularly during the supply chain crisis, as this drastic change to our operations will create significant impacts and strains throughout the local, state, and national supply chain systems,” the letter reads.

But slower shipping still beats shipping that gets stolen.

On train tracks in Los Angeles, a carpet of ripped-open packages and plastic stretches as far as the eye can see. At one point, packages on the tracks piled up so much that they derailed a train.

One reporter at the scene where such burglaries regularly take place estimated that 1 in every 5 train cars was torn open and looted. In its letter, UP said that in the past three months, thieves have broken into 90 train containers every day. Often, they carried weapons and assaulted train employees.

Thieves have taken a grand total of $5 million from the railroad, according to the letter.

In response, UP has deployed drones, fencing, and high-tech trespasser detection systems and has paid for additional law enforcement to help prevent theft. The results have been underwhelming, but not because UP has failed to catch criminals.

“Even with these expanded resources and closer partnerships with local law enforcement, we find ourselves coming back to the same results with the Los Angeles County criminal justice system,” the letter reads.

According to UP, the local district attorney’s office allows the criminals it captures to walk free.

“Without any judicial deterrence or consequence, it is no surprise that over the past year UP has witnessed the significant increase in criminal rail theft described above,” the letter reads.

After more than 100 arrests of train robbers, UP said that it hasn’t been contacted once regarding court proceedings; many of these arrests were made by UP’s own hired security.

Instead of charging thieves with felonies, the district attorney’s office has sent them to local courts, reduced their charges to misdemeanors or petty offenses, and released them after they paid a small fine, according to UP. The whole process takes about one day.

“Criminals boast to our officers that charges will be pled down to simple trespassing—which bears no serious consequence,” the letter reads.

UP suggested that the lenient sentences were motivated by social justice.

“While we understand the well-intended social justice goals of the policy, we need our justice system to support our partnership efforts with local law enforcement, hold these criminals accountable, and most important, help protect our employees and the critical local and national rail network,” the letter reads.

Los Angeles County’s decision to allow the tracks to become too dangerous for trains will likely have nationwide consequences; the county is one of the most important U.S. transportation hubs.

The county is the site of the two largest U.S. ports, the Port of Los Angeles and the Port of Long Beach, which together receive more than 9 million containers yearly.

At the Port of Los Angeles, freight trains carry about a third of this never-ending river of containers to their eventual destinations across the United States.

Currently, UP runs three of the port’s five main railyards. The Port of Long Beach also depends on UP for railroad shipping. Without Union Pacific, the ports would have to find a new way to export containers.

UP told the district attorney that it would “strongly urge” him to reconsider his policies.

“We stand ready to meet with you and other stakeholders to help implement needed and immediate actions. We look forward to that necessary collaboration to restore public safety and order,” the letter reads.