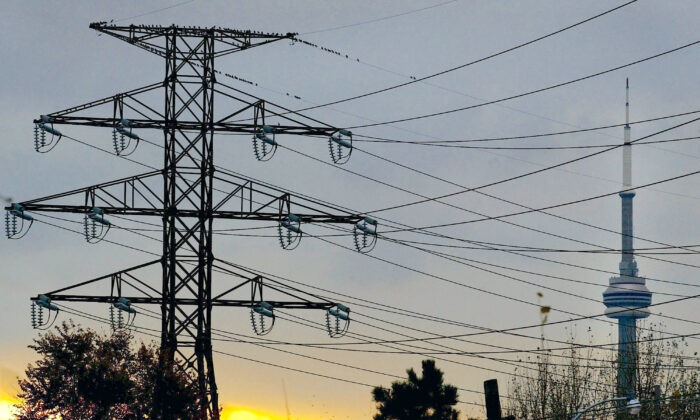 A hydro tower is seen with the CN Tower as a backdrop in downtown Toronto on Nov. 11, 2002. (Kevin Frayer/CP Photo)
Economy

Some of the top utility providers in the United States cut off power to customers across the nation despite receiving tax bailouts through the Coronavirus Aid, Relief, and Economic Security (CARES) Act during the COVID-19 pandemic, according to a new report.

In September, The Center for Biological Diversity’s Energy Justice Program and BailoutWatch released its “Powerless in the Pandemic” report which found that the nation’s top utilities received a collective $1.25 billion from last year’s administration bailouts, allowing them to grant customers temporary relief.

Under the $2.2 trillion economic stimulus bill passed by Congress on March 25, 2020, and signed into law on March 27, 2020, businesses in the energy sector were able to get hefty tax bailouts if they were at risk of taking an economic hit as a result of the pandemic.

But instead, the top utility providers continued to shut off families’ electric services almost a million times, according to the new report.

Sixteen of the providers suspended or canceled electric services to almost one million households between February 2020 and June 2021 alone, leaving people without access to hot water and other utilities, and forcing some to vacate their home altogether, the Center for Biological Diversity’s Energy found.

Nine companies received tax bailouts amounting to $1.25 billion, of which 8.5 percent could have been used to prevent every shutoff reported.

Together, Duke Energy and DTE Energy received a combined total of $845 million in government bailouts, which amounts to more than 75 percent of the tax bailout money the report identified in the utilities sector.

Yet those companies cut off power to customers’ homes more than 203,000 times, despite their tax bailout providing them with enough funding to allow customers to forgo utility bill payments more than 150 times, the report states.

The worst offenders were NextEra Energy, parent of Florida Power & Light, Duke Energy, Southern Company, Dominion Energy, Exelon, and DTE Energy, who were behind about 94 percent of the documented shutoffs. Of those shut offs, NextEra alone accounted for nearly half.

According to The Center for Biological Diversity, the money these utility services spent paying executives and increasing shareholder dividends could have afforded them instead to bail out their customers over 500 times.

“It’s appalling that utility companies cut power to countless families throughout the pandemic while raking in taxpayer bailout money,” said Jean Su, director of the Center for Biological Diversity’s energy justice program. “This greedy, heartless practice hurts low-wealth communities and communities of color most of all. It needs to stop. Complicit state regulators who fail to make shutoff data public should stop cowering and start shedding light on utilities’ bad behavior.”

Chris Kuveke, data analyst with BailoutWatch called for the utility companies to be tightly regulated and accused them of prioritizing “profits and shareholder satisfaction over all else, including customer health and the climate.”

The Center for Biological Diversity’s energy justice program also said the report reveals that utility companies lack transparency, noting that they were only able to analyze data—including annual and quarterly financial disclosures filed with the U.S. Securities and Exchange Commission—of 16 utilities because “that is all that’s publicly available.”

In an emailed statement to The Epoch Times, Duke Energy said, “No one has done more than Duke Energy to support customers throughout the pandemic. Duke Energy was one of the first companies to immediately halt disconnections for unpaid bills and waive credit card and late payment fees. The company also set up flexible payment plans to ensure customers who were experiencing economic hardships could have flexibility.

The Florida Power & Light Company, a subsidiary of NextEra Energy, said in an emailed statement that the report presented a “blatantly false narrative” that is “nothing more than a publicity stunt.”

The company accused the report of having omitted “several very important data points” about how it worked with its customers during the pandemic. It said that it had provided customers a total of $75 million in financial assistance in multiple initiatives that include ongoing bill credits for eligible low-income and small business customers.

The company said that the authors of the report had “intentionally” omitted how “the vast majority of customers disconnected for nonpayment were quickly reconnected, most within just 24 hours.”