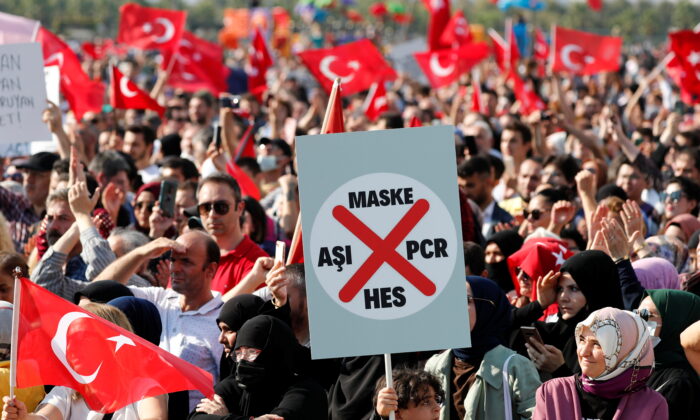 A boy holds a placard as demonstrators wave Turkish flags during a protest against official COVID-19-related mandates, including vaccinations, tests, and masks, in Istanbul, Turkey, on Sept. 11, 2021. (Murad Sezer/Reuters)
WORLD

Thousands of people gathered in the Maltepe district of Istanbul on Sept. 11 to protest against COVID-19-related restrictions, including vaccine mandates, saying the restrictions infringe on their rights.

Nearly 3,000 people attended the rally, which was permitted by the governor’s office and started at 2 p.m. local time, Turkish news agency Diken reported.

Demonstrators organized the protest in the wake of new measures passed by the Turkish government that will go into effect starting Sept. 13—requiring proof of vaccination or a negative COVID-19 test for all users of intercity planes, buses, and trains, as well as for those attending large events, such as concerts or theater performances.

According to videos and photos of the rally, a large crowd of people listened to speakers while holding placards that read: “The Turkish people will not become vaccine guinea pigs,” “Freedom is not free. We are ready to pay for it,” “My body, my decision,” and “The health ministry is not a vaccine marketing office.”

Representatives of 14 political parties were present for the rally, Diken reported. Participants in the demonstration, which was dubbed “The Great Awakening,” chanted slogans such as “big resignation” and “down with the murderers.”

“This pandemic is just going on with even more restrictions on our freedoms, and there’s no end to it,” said Erdem Boz, a 40-year-old software developer. “Masks, vaccines, PCR tests might all become mandatory. We’re here to voice our discontent with this.”

“We’re against all these mandates,” said Aynur Buyruk Bilen, a member of the so-called Plandemic Resistance Movement.

“I think that the vaccines aren’t complete and that it’s an experimental liquid.”

Starting on Sept. 13, all unvaccinated school employees are required to take a PCR test twice per week. Masks and social distancing are required in public.

Turkish Health Minister Fahrettin Koca said on Twitter on the day of the protest that vaccines are “the ultimate solution” and that mandating such rules is “essential.”

According to data collected by the Turkish Health Ministry, more than 51 million people in Turkey have received their first doses of the COVID-19 vaccine under the country’s national program, among a population of 85 million. Nearly 40 million people are fully inoculated as part of the program that started in January.

New daily cases in Turkey average around 23,000, prompting a warning from Koca earlier this month, saying that right now the pandemic is only “for the unvaccinated.”