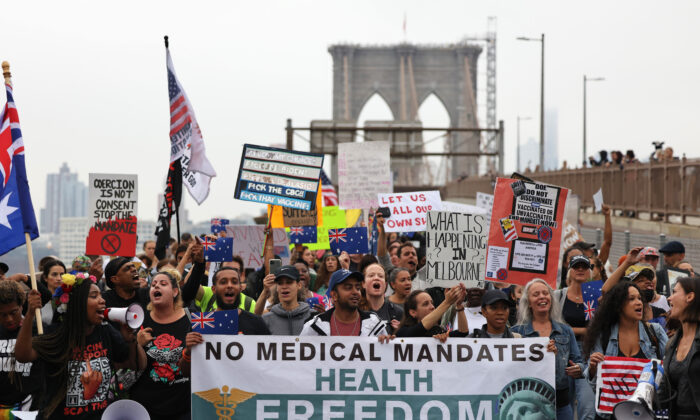 Thousands of unvaccinated New York City teachers were placed on unpaid leave after a citywide mandate went into effect, according to the United Federation of Teachers.

About 97 percent of teachers and other school staff represented by the union got the vaccine, the United Federation of Teachers President Michael Mulgrew confirmed in a news conference on Monday afternoon.

“Under 4,000” of about 121,000 workers represented by the United Federation of Teachers were missing from city schools as of Monday, Mulgrew said in response to a question about how many teachers were taken off the payroll due to the city’s vaccine mandate. He said that individuals who receive the vaccine in the near future can return to work immediately.

Some of those unvaccinated teachers have lost “their livelihood,” Mulgrew said, although he stressed that staff should get vaccinated. Mulgrew also stated he is concerned about a lack of school safety officers and staffing issues, namely in District 75 in Staten Island and other areas.

Classes resumed in person on Monday after New York City gave an Oct. 1 deadline for teachers to get the vaccine. Mulgrew said that about 1,000 teachers and school staff got the shot over the past weekend and are now in class as of Monday.

“Every adult in our schools is now vaccinated. That’s going to be the rule going forward. That’s the way to keep kids safe,” Mayor Bill de Blasio, a Democrat, said during a briefing on Monday. “Ninety-five percent of all full-time [Department of Education] employees are vaccinated, 96 percent of all teachers, 99 percent of all principals,” he added

In Brooklyn, numerous teachers gathered to protest in front of the Department of Education’s office against the vaccine mandate on Monday.

JUST IN: Crowd protest outside New York City Department of Education over vaccine mandate, chants ‘the system is corrupt’pic.twitter.com/gA4bgU0a5K

“I just think this should be a personal choice,” one longtime Brooklyn special education teacher told the New York Post. “The most distressing thing is that we were told we were essential last year and now we’re just nothing.”

“We have more subs that are vaccinated than unvaccinated, teachers and our superintendents have been working with our principals to develop plans to ensure our students get the education and continue to get the education they deserve in person,” Porter said.

A similar mandate for teachers and school staff is scheduled to go into effect in Los Angeles on Oct. 15.

A group of teachers and other employees filed a lawsuit against the citywide mandate, asking the U.S. Supreme Court to intervene. However, Justice Sonia Sotomayor denied the request on Oct. 1.