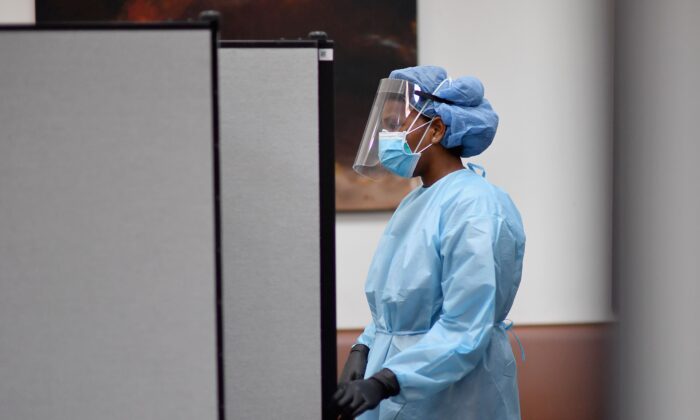 A registered nurse waits to test residents for COVID-19 antibodies at Abyssinian Baptist Church in the Harlem neighborhood of New York City on May 14, 2020. (Angela Weiss/AFP via Getty Images)
NY News

Thousands of nurses and other health care workers across New York state have lost their jobs or been suspended because they are refusing to comply with the state’s mandate to get vaccinated against COVID-19.

Going into effect on Sept. 27, the mandate has led to staffing shortages, although some of the large hospital systems in the state have said they are maintaining continuity of services.

As of Sept. 27, 92 percent of hospital employees in the state have received at least one dose of the vaccine, based on “preliminary self-reported data,” the office of New York Gov. Kathy Hochul said in a statement. That would leave tens of thousands of hospital workers slated for termination, though some health care providers indicated that they are giving their employees some time to still get vaccinated and return to work.

The mandate has already caused some disruptions upstate.

Strong Memorial Hospital in Rochester announced a two-week pause to some elective procedures.

“Patients can expect longer wait times for routine appointments, some employees will be asked to take on new responsibilities, and temporary bed closures are possible,” the University of Rochester, which runs the hospital, said in a statement, noting emergency services and critical care will continue.

Northwell Health, the state’s largest health care employer with two dozen hospitals and 76,000 staff, indicated that not all unvaccinated employees were given the immediate boot.

The company “notified all unvaccinated team members that they are no longer in compliance with New York State’s mandate,” spokesman Jason Molinet told The Epoch Times.

“We have begun a process to exit all unvaccinated team members, using a carefully planned approach that both maintains continuity of care at all of our facilities and ensures the safety of all of our patients,” he said in an emailed statement.

He declined to clarify whether that means some unvaccinated employees are being allowed to keep working for now.

“Sorry, no update beyond the statement,” he said.

More than 91 percent of staff members at NYC Health + Hospitals, the New York City-run safety net hospital system, are vaccinated, an official with the company told The Epoch Times. That still leaves more than 3,000 unvaccinated individuals, who have been put on unpaid leave yet are free to return to work if they change their minds on the vaccination.

At New York-Presbyterian Hospitals, one of the nation’s largest hospital systems, there remain fewer than 220 unvaccinated out of 48,000 employees with the passing of the deadline, President and Chief Executive Steven Corwin told CBS News.

St. Barnabas Hospital in The Bronx borough of New York City has fewer than 100 out of its 3,000 employees still unvaccinated, down from more than 600 a week ago, spokesman Steve Clark told The Epoch Times. They have until Oct. 4 at 6 a.m. to get the first dose of the vaccine before being fired.

“The loss of these employees, who are presently suspended, has not affected patient care or staff scheduling,” Clark said via email. “The previous week was spent in an intensive effort to communicate to supervisors and staff about the mandate.”

At Samaritan Health in northern New York, over 90 percent of its over 2,000-strong staff was vaccinated and another roughly 6 percent were granted exemptions from the mandate as of Sept. 27 afternoon, spokeswoman Leslie Distefano told The Epoch Times. Employees in violation of the mandate were placed on two weeks leave. If they won’t get vaccinated by then, they’ll be fired. The mandate hasn’t caused any significant disruptions to services, she said.

Hochul declared a state of emergency on Sept. 27 to deal with potential staffing shortages. She said on Sept. 25 she was prepared to activate National Guard members who have medical training to replace health care workers. Providers can hire workers licensed in other states and countries, as well as recent graduates and retired health care professionals, she said.

Correction: A previous version of the article included an incorrect workforce figure for Northwell Health. The network has over 76,000 employees.