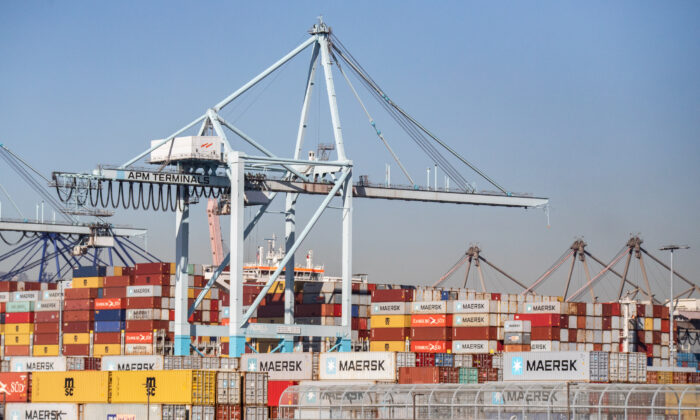 The Reagan Cure for Clogged Ports and Goods Shortages

Fall 2021 has a 1980 vibe to it. Shortages. A faltering supply system. Inflation. Rising unemployment.

Even if you don’t remember it personally, I’m sure you’ve seen pictures of the lines of cars waiting to buy gas during the 1979 Oil Shock. Global oil supplies dropped after Ayatollah Khomeini’s revolution in Iran, a major producer.

That was the atmosphere in which Ronald Reagan was elected president in 1980. It’s similar to what we’re going through now.

On Oct. 13, President Joe Biden took the command approach, ordering the ports of Los Angeles and Long Beach to operate 24 hours a day. Rep. Michelle Steel (R-Huntington Beach) responded, “I am glad the Administration is finally acting on this issue and now it’s time to approve the Major Disaster Declaration I asked for more than a week ago.”

She also introduced legislation to ban cargo ships from idling or anchoring off the coast of Orange County. But she, too, is treating the symptoms instead of the causes of the problem. Where would the ships go? Wouldn’t that make the supply problems worse?

What would Reagan do today? Although no historical periods offer exact analogies, there are some instructive parallels.

One of the first things Reagan did when in office was cut regulations on the energy industry. Specifically, although President Jimmy Carter had introduced some decontrol of oil, in 1981, Reagan ended all production limits and price controls on oil. But while critics predicted soaring prices for oil and gas at the pump, the opposite happened. Production soared and prices dropped.

It took a lot of speeches to control natural gas. A fine one was the Great Communicator’s address to the nation on Feb. 26, 1983. He pointed out that the regulations keep prices higher and hurt consumers. Here’s a short YouTube video clip of Reagan’s speech.

In 1985, he got Congress to advance partial decontrol. Full decontrol of oil prices took place only in 1989, the year after he left office.

“Ships and trucks will be required to cut thousands of tons of air pollution in communities near ports, freeways, and warehouses under a pair of rules unanimously adopted by the Air Resources Board today,” CalMatters reported at the time.

“Some of the nation’s most powerful businesses—oil companies, engine manufacturers, and ports—opposed the new rules, saying the battered economy cannot weather changes that could reach nearly $7 billion. The air board’s hearings on the two rules lasted more than eight hours, with dozens of people voicing support and opposition.

“Moving goods from ship to truck to warehouse accounts for nearly a third of California’s economy, but about half of its air pollution (pdf). Much of the pollution affects disadvantaged communities and communities of color near ports, freeways, and freight corridors.”

The supposed damage to “disadvantaged communities and communities of color” often is brought up nowadays as an excuse to shut down industry. But I grew up in the 1960s in southeastern Michigan when nearby factories, such as the massive River Rouge plant, spewed pollution most of the day. We choked on it until it was cleaned up in the 1970s.

But my parents always remembered something else. “When the smokestacks stopped” was the phrase they used many times. That began in 1930 as the Great Depression dug in, and my grandfathers lost their jobs. To them, smokestacks meant industry and jobs. Detroit then was the Paris of the West. In World War II, it was the Arsenal of Democracy. Even factory workers enjoyed the world’s highest standard of living.

In California, those losing jobs due to overregulation of the shipping industry naturally are those who live next to the shipyards. If you kill the work, you kill the jobs.

Except for winning the Cold War against the Soviet Union, Reagan is best remembered for cutting taxes and reviving the economy from “stagflation”—stagnation plus inflation. The top income tax rate dropped from 70 percent under Carter, to 50 percent by 1983, then to 28 percent in 1986. Equivalent rates for the middle class were cut. Everybody paid less.

The economy soared by 7 percent in 1983, and an average of 4 percent after that. Until President George H.W. Bush foolishly raised taxes in 1990.

The Reagan cuts were incorrectly framed as “putting money in the pockets of the people” to spend and circulate cash through the economy. Actually, the main aim was to encourage investment in creating new businesses and jobs. People don’t invest unless they can make a decent return on their investment. Otherwise, capital flows to other, more congenial tax climates in other countries.

Biden today is doing the opposite. He’s negotiating with House Speaker Nancy Pelosi (D-Calif.) to massively raise taxes as part of the Democrats’ Build Back Better waste program. The cost: $3.5 trillion, although that likely will be reduced to maybe $2 trillion. Still an enormous amount.

Another big factor is uncertainty. Do you know what taxes you’ll be paying next year? Especially if you run a business? Businesses need certainty to plan for the future.

People who have been in government their whole lives, such as Biden and Pelosi, have no idea how tough it is to run a for-profit business. If you don’t make a profit, you go broke. If you have a narrow profit margin, and higher taxes and regulations move that margin into negative territory, you go broke.

Cutting taxes and regulations Reagan-style would encourage the creation of new businesses to deal with the port problems and other issues. Granted, some of these problems will take years to alleviate. And the pandemic would have caused problems no matter what. But much as a healthy person can get through a disease better than an unhealthy person, so a healthy tax and regulatory environment makes it easier to survive an economic shock.

Although the renewed federal attack on business is only nine months old under Biden, in California, the assault goes back decades. (I don’t need to rehash here such previous Epoch Times columns of mine as “Local Tax Increases Slam Californians” and “California Businesses Exiting Faster Than Ever.”)

Reagan showed us the way out of a similar crisis 40 years ago. His solutions would work again. It’s still true, as he said: “Government isn’t the solution. Government is the problem.”