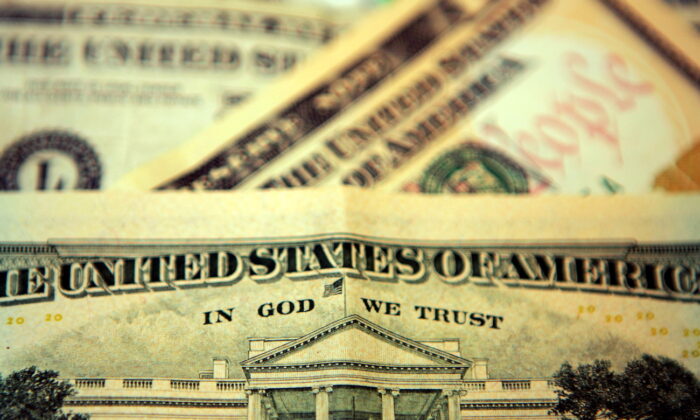 In this photo illustration the phrase "In God We Trust" can be seen on an American 10-dollar bill. (Hugh Pinney/Getty Images)
Viewpoints

The End of American Courage

It’s “the ability to disregard fear.” That’s how the Oxford Dictionary defines courage. There are many things of which we’re fearful, and whether or not we face most of them is unimportant. Disregarding a fear of spiders to kill one doesn’t constitute courage. The Oxford Dictionary places the definition in context by further stating “the courage to act on one’s beliefs.” And in their beliefs is where Americans have faltered.

The definition of belief is “a person’s religion; religious conviction.” Our personal beliefs are arguably the most sacred part of us, and not having the courage to act upon them indicates we truly don’t possess them.

Over the centuries, Americans have demonstrated such courage to defend their beliefs in the face of grave dangers. Over the decades, however, Americans seem to have become alarmingly disenchanted with the idea of courage, much less religious conviction. As a result, America now stands on the threshold between preservation and neglection.

The Undermining of American Courage

Today, we’re too smart for religious convictions or belief in God. And that in itself is just the problem—not that we don’t believe in God, but that we sense our national brilliance can’t allow such a concession.

The argument for our brilliance is not even personal, but collective. It’s the idea that we, on an individual level, may not be that smart, but those in charge—those at the highest levels of science, academia, and law—know better than we do. They’re our collective thought process, and if they suggest that God is a fictional aspiration we should relinquish, then we believe they have a valid point, even if we decide to hold on to our belief.

This is how the demise of any society begins. We’re told what to think. Even if we choose to do otherwise, we’ve allowed something just as deadly to poison our individuality: we’ve allowed the powerful and the brilliant to suggest they can at least attempt to dictate our patterns of thought.

These dictatorial powers harnessed by corporate executives, tenured professors, mainstream journalists, sinister psychologists, and egotistic bureaucrats have made the average American sense—even if subconsciously—that perhaps it’s best they don’t have a say in the local conversation, much less the national one. So Americans have learned to self-censor. In other words, Americans have silenced their beliefs.

The Result of Silence

This current stream of soft dictatorship is reminiscent of what Aleksandr Solzhenitsyn expressed during a speech he gave in London in 1983:

“Over half a century ago, while I was still a child, I recall hearing a number of older people offer the following explanation for the great disasters that had befallen Russia: ‘Men have forgotten God; that’s why all this has happened.’”

Now, to make such a statement meant that “God” had actually not been “forgotten.” What it indicates is that those personal beliefs were no longer consequential. They meant nothing. Those beliefs were no longer tolerated being discussed with anyone outside their immediate and trusted circle, and even that was risky.

A comparison between Stalinist Russia and modern America is unfair because they’re clearly not equivalent. This is why the statement that Solzhenitsyn heard as a child is so important. Solzhenitsyn was born in 1918, a year into the Revolution. The older people he overheard had witnessed the devolvement of the Russian Empire into the USSR. So they understood “why all this ha[d] happened.”

This is the potential equivalent of Stalinist Russia. What will our grandchildren overhear in the years to come?

Democracy Depends on the Marketplace of Ideas

The idea of “God” was the fundamental basis for Englishmen coming to these shores. George Washington considered religion and morality two “indispensable supports” that held up America’s foundation. Many other Founders felt the same.

The marketplace has introduced many terrible ideas that have moved America away from God. The devolvement has no doubt been a long process. From the theory of evolution taking over as the only scientific reason for human existence to embracing the idea that human existence is arbitrary and can be aborted with little to no objection. From the idea that women can’t legally have the same rights as men to the absurd suggestion that surgically women can become men (and vice versa).

The list of ideas that have been inflicted on American society is ongoing and at times devastating. This doesn’t mean that these types of ideas should be shouldered for eternity. Bad ideas should be allowed a spot in the marketplace. It’s the only way to spot the good from the bad. The problem is when the powers advocate bad ideas, introduce them to society, and then force that society to engage in those ideas (whether they believe in them or not is also inconsequential).

The danger Americans face, which is equivalent to Stalinist Russia, is that the opportunity to circumvent bad ideas is becoming more and more restricted. It’s reminiscent of another Solzhenitsyn quote: “Beaten down, sickly, virtue has now been allowed to enter in all its tatters and sit in the corner, as long as it doesn’t raise its voice.”

If logic and reason, along with faith and virtue, are no longer allowed spots in the marketplace, then we doom our grandchildren to soon overhear our frightening statements.

In this day and age, perhaps more than any other time in American history (and I don’t write that haphazardly), we need American courage. We must conduct ourselves according to the dictates of our consciences.