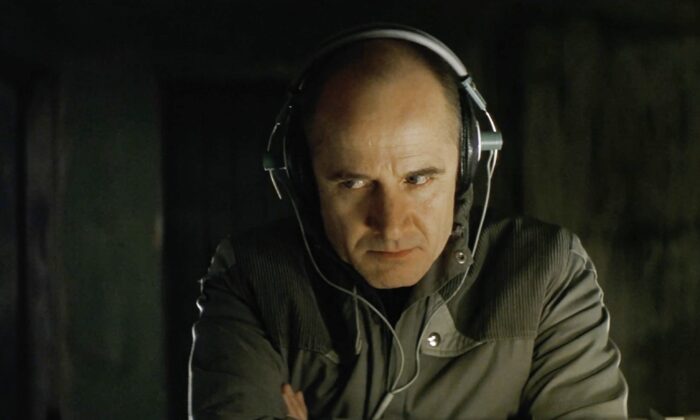 Many, particularly those on the right, worry the United States is turning into China, but we are a Western nation coming out of a (mostly) Western tradition.

I believe we should be as much concerned, if not more, that we are beginning to resemble East Germany with its State Security Service (Staatssicherheitsdienst), better known as the Stasi.

As Wikipedia reminds us:

“One of the Stasi’s main tasks was spying on the population, primarily through a vast network of citizens turned informants, and fighting any opposition by overt and covert measures, including hidden psychological destruction of dissidents (“Zersetzung,” literally meaning “decomposition”). It arrested 250,000 people as political prisoners during its existence.”

I was reminded of this Zersetzung and its psychological destruction of dissidents—soon we may all be classified that way, if not already—by a photo I received this morning from a (necessarily anonymous) friend who works at the Los Angeles Cedars-Sinai Medical Center, among the most prestigious hospitals in the country.

With his/her permission, I am sharing it with you.

This person photographed an announcement taped to a wall at the hospital that read: “Implicit Bias Anonymous Reporting System.”

Beneath these ominous words was the usual digital code symbol automatically connecting a cellphone to the “system,” as if the hospital were a restaurant during COVID providing a hands-free menu for your convenience.

In other words, it was a convenient posting for how to snitch on your friends and colleagues for their “implicit bias,” whatever that is. (I’m probably exhibiting some just by writing this.)

I asked my friend, who has known the hospital well for many years, whether this could be a joke, but was vehemently assured it wasn’t. Joke or not, it gives a clear idea of where the powers that be at that hospital—and many others, I would wager—stand.

My friend tells me that staff gets “constant political crap” from the chairwoman of the hospital for showing bias against “protected minorities,” whatever that means—although they observe the Hippocratic Oath and treat all patients the same anyway.

You could call this growing atmosphere Stasi Lite—maybe we should name a beer after it—not to mention a good way to keep potential dissidents in line.

Schools are much the same way now. When Brearley father Andrew Guttman—fed up with the “wokeism” pervading that posh girls’ private school in New York City—explained in a letter the reasons he was pulling his daughter from the institution, they came for his head.

His bias wasn’t just implicit. It was explicit, as Jane Fried, head of the school, made clear in her response:

“This afternoon, I and others who work closely with Upper School students met with more than one hundred of them, many of whom told us that they felt frightened and intimidated by the letter and the fact that it was sent directly to their homes. Our students noted that as this letter, which denies the presence of systemic racism, crossed their doorways, the evidence of ongoing racism—systemic and otherwise—is daily present in our headlines.”

Imagine—he questions “systemic racism.” That’s grounds for excommunication or worse. So much for Buckingham Palace denying its racism, or something like that.

Sounds as if Fried is engaging in a little Stasi-style “psychological destruction of dissidents” here.

But this is indeed all Stasi Lite compared to our Department of Justice, which, in many ways, seems to be veering toward being the real thing or maybe already has become it.

When it comes to investigating Republicans, including Republican presidents and candidates not long ago, the DOJ appears to be Johnny-on-the-spot (cf. how anyone within several football fields of the Capitol on Jan. 6 had their lives turned upside down within days and were accused of multiple heinous crimes), but when it comes to investigating Democrats, their alacrity disappears in a bureaucratic haze thick as Beijing smog on a summer’s day.

We will all be astonished if the full contents of Hunter Biden’s laptop are revealed this century. And that other guy, John … what was his name? … oh, yes, Durham. What happened to him? Will anybody even remember who James Clapper is when Durham surfaces, if he does, with whatever he is allowed to surface with by the new attorney general?

Stasi Lite becomes Stasi Lager or perhaps Stasi IPA. A lot of which can bring you down in more ways than one.

Speaking of which, the brilliant German movie “The Lives of Others” (highly recommended now more than ever) is about the Stasi and gives great insight into what it’s like, how inhuman it becomes, on the deepest personal levels, emotionally and romantically, to exist under such a system when the state controls everything.

We must be on watch if it happens to us. This Stasi-like existence is working on our minds, consciously or unconsciously.

We may be used to it already to some degree because of Big Tech, but this is more than one turn of the screw further. With Big Tech, although they know all, or most of all, about us, they’re only interested intermittently. Sometimes they ignore us, as long as we keep our digital heads down.

So be careful if you have, in your past, present, or future, any “implicit bias,” let alone “explicit bias,” because that could mean, as we know … just about anything.