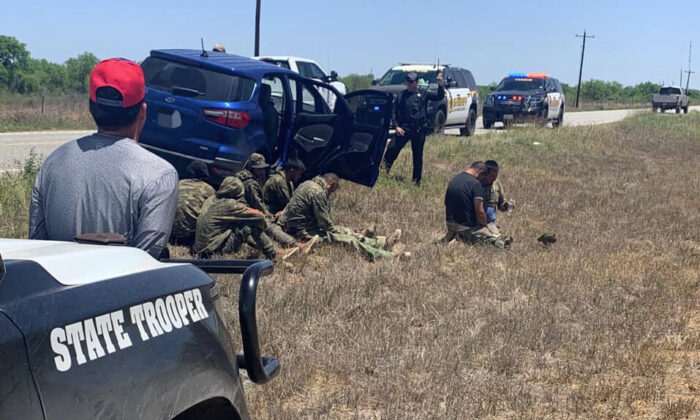 A Honduran woman’s body was found dumped in the brush on private property in Goliad County, Texas, after she had been smuggled hundreds of miles north from the border in March, according to county Sheriff Roy Boyd. In another case, an old shed on a ranch was being used to strip stolen vehicles in preparation for smuggling people.

Boyd says the county—which sits about 200 miles north of the U.S.–Mexico border—is used as a staging area for smuggling illegal aliens to Houston.

“What happens is they’ll bring them up from the border to somewhere in this area. They’ll drop them off at a temporary holding site and then someone from Houston comes and picks them up and then takes them to Houston, where they’re distributed across the United States,” he said.

Goliad County, with a population of 7,600, is one of four Texas counties that issued local states of disaster last week due to the impact of the border surge. Three of the counties are located 40 to 200 miles north of the border but are dealing with cross-border crime and human smuggling every day.

In their declarations, each of the counties—Kinney, Goliad, La Salle, and Atascosa—said the “health, life, and property” of their residents are “under imminent threat of disaster from the human trafficking occurring on our border with Mexico.”

Border Patrol agents apprehended more than 76,000 illegal aliens along the U.S.–Mexico border in the first two weeks of April. In addition, the average number of illegal aliens who evade capture is about 1,000 per day.

“This continual violation of our sovereignty and territorial integrity has resulted in residents of South Texas being assaulted, threatened with violence, and robbed, while also sustaining vast amounts of property damage.”

“We don’t have a lot of redundancy in these small counties and it’s taking up every bit of their resources,” Bennett said during a public meeting in Westache on April 22.

“This needs to be addressed at the source—which is our border—and that’s what we’re hoping our governor will do.”

On April 26, Abbott asked county judges to send him a “full and accurate” estimate of the fiscal impact on their county so he can bill the federal government for costs incurred.

Boyd said he’s been dealing with border issues since 2005.

“I’ve never seen anything quite like this,” he said at the public meeting. “Things pretty much started drying up on the border during the last administration. Things were pretty much under control.

“Well, that came to a real fast end, and it’s the Wild West on steroids.”

Boyd asked locals to check their land for signs of illegal activity, including discarded water bottles, campfire remnants, and large amounts of trash.

“If we’re not going to do something about any of this, then we’re not a nation,” he said.

“I’d much rather see the federal government get off their duff and do something about this, but, I’m sorry, I have no faith. It’s going to have to come from the state of Texas. If the state doesn’t do something, it’s all going to be over.”

Kinney County, which started the ball rolling on the disaster declarations, is the only one of the four counties that’s situated on the international border. The county is a direct smuggling route from Del Rio to San Antonio.

“My guys have been in more pursuits in the past year than most police officers will do in a lifetime. We’re catching more and more every day. We file charges, [then] we have to let them go because our jails are full.”

On April 23, the sheriff’s office posted a message on its Facebook page: “In less than 18 hours, Kinney County Sheriff’s Deputies have encountered 5 human trafficking cases and 1 stolen vehicle.”

Kinney County attorney Brent Smith said Texas should act on its own accord to enforce its border with Mexico.

“It is my opinion that an emergency declaration by Governor Abbott or the Texas Legislature would authorize Texas to take certain steps in the enforcement of its own borders and the protection of its citizens’ health, safety, and welfare,” Smith wrote in The 830 Times on April 8.

Newly elected Lavaca County Judge Mark Myers also spoke at the public meeting, despite his county not declaring a disaster. His county sits between the border and Houston.

Since January, within the county, more than 13 pickup trucks have been stolen, and seven high-speed pursuits ended in crashes. Three illegal aliens have been airlifted to hospitals.

“This all costs taxpayer money, because illegal aliens don’t pay that bill—you do,” Myers said, adding that it costs $40,000 to airlift an injured person.

“This is not a sustainable future. We cannot do this.”

Myers encouraged the 400 to 500  participants at the meeting to “flood the telephone network” of state representatives in Austin.

“The governor needs to act on this, and he needs to treat it as what it is, which is an invasion of our nation. This is an act of war,” Myers said.