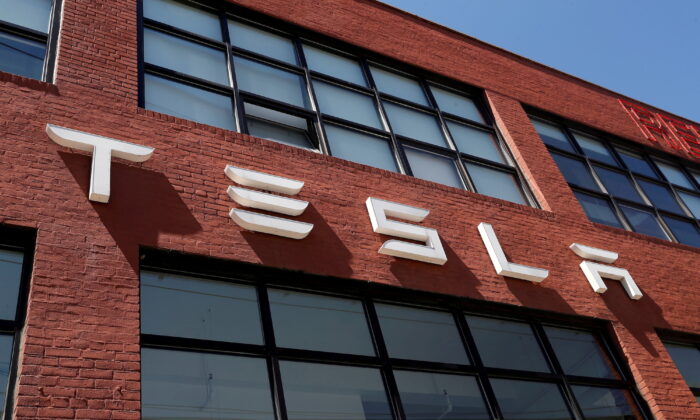 The Tesla logo is seen outside a dealership in the Brooklyn borough of New York on April 26, 2021. (Shannon Stapleton/Reuters)
Economy

Tesla Inc. was trading more than 13 percent higher on Monday, crossing above $1,000 a share and surpassing a $1 trillion market value.

Earlier in the day, Morgan Stanley raised its price target on the electric vehicle marker to $1,200.

The fuel for the move came Oct. 21 following a bullish reaction to Tesla’s third-quarter earnings print. Technical traders may have seen the break out coming, however, because Tesla had created a bull flag pattern on the daily chart, with the pole formed on Oct. 15 and Oct. 18 and the flag between Oct. 19 and Oct. 20.

Tesla gapped up over 4 percent higher on Monday and later in the trading day reached a new all-time high of $1,045 per share before retracing slightly on the daily chart. The closest lower gap between $910 and $944.20, paired with another gap between $843.21 and $849.74 makes it likely Tesla will retrace toward $843 in the future, however, because gaps on charts fill 90 percent of the time.

Tesla’s stock is also likely to retrace because on Monday the stock’s relative strength index reached the 90 percent level. When a stock’s RSI reaches or exceeds 70 percent it becomes overbought, which is a sell signal for technical traders.

Tesla’s stock has been trading in a fairly consistent uptrend since Aug. 17, making higher highs and higher lows on the daily chart. Tesla’s last higher low was printed on Oct. 21 at the $855.50 mark and as long as the stock doesn’t fall below the level the uptrend will be intact.

Bulls want to see eventual consolidation and for Tesla to print another higher low to develop new support levels. The stock is trading in blue skies and there is no resistance level above outside of Monday’s high-of-day.

Bears want to see big bearish volume come in and drop Tesla down below $855 to negate the uptrend. Tesla has psychological support at $1000 and price history support at $900 and $877.95.