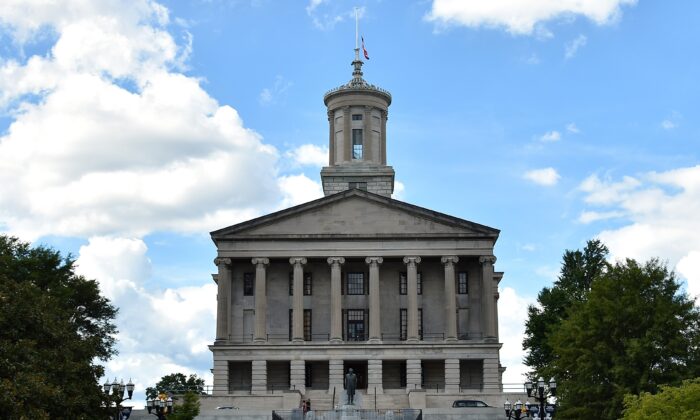 The Tennessee state capitol in Nashville, Tenn., on Aug. 31, 2018. (FaceMePLS via Wikimedia Commons/CC BY 2.0)
Viewpoints

The red state/blue state dichotomy is not simple.

Nowhere is that more apparent than Tennessee where—despite having one of the most conservative electorates in the country—the leadership has been passive at best in responding to the wishes of their supporters during these days of great crisis.

That includes Governor Bill Lee who has been nowhere near as forthright—in fact has been retrograde on a number of issues—as the governors of other red states, yet for reasons unknown got an early endorsement from Donald Trump.

The state legislature, in which Republicans have a super majority, hasn’t been much better.

Part of the explanation is that many of these leaders see themselves more as big business ambassadors—Oracle and Amazon were recently wooed to Nashville (with generous incentives) and now Ford to a suburb of Memphis (with even more generous incentives)—than as elected officials chosen by the people to deal with the issues that most affect their lives.

These days the most pressing issues are obviously COVID with the vaccine and mask mandates followed by a wretched public education system infected by something called “social emotional learning,” which is a euphemism for leftwing indoctrination from Pre-K onward.

Immigration is also of great concern with illegal immigrants mysteriously appearing in the state via airplane in the middle of the night as they have elsewhere. Along with this is an extraordinary rise in human trafficking making it more lucrative even than the drug trade.

And then there’s the little matter of election integrity.

Some of this is about to change. Or, more exactly, has an opportunity to change, if the Tennessee legislature can man and/or woman up.

Starting Oct. 27, a “special session” of the Tennessee legislature has been called to deal with COVID matters.

As the determinedly liberal Tennessean puts it “Lawmakers could address a wide range of issues, including limiting the governor’s emergency power and regulating private businesses’ authority to implement mask or vaccine mandates, according to the language of the call.”

Well, well, well, “les jeux sont faits,” the chips are down, as they say in Monte Carlo.

What we have looming before us in the Volunteer State is a battle that extends beyond the state’s borders to the entire country and, in a way, the world. Even if the “whole world [may not be] watching,” after the results of what is determined in this “special session” are promulgated across the internet, it will be written in indelible digital stone what Tennessee’s legislators did for the citizens of their state, most of all for their children and young people, in Oct.-Nov. 2021.

So allow me as a relatively new Tennessean (three years and five months) to state the obvious starting point: Attempts to deal with COVID-19—called with increasing accuracy on this site the CCP virus—by the U.S. government and its Center for Disease Control, since we first began hearing about it in early 2020, have been close to an utter failure.

Despite myriad promises of solutions, we are essentially in the same place with the same “cures” on offer. Progress that was promised on multiple occasions has never happened.

Further, statistics from states and countries show little or no difference between those vaccinated and not, those that locked down and didn’t, those that masked and didn’t, and so forth. (Alex Berenson, on his Substack, has demonstrated this very well.)

We’re still being handed the same rhetoric. What was Einstein’s famous definition of insanity? If you keep doing the same thing again and again, hoping for… well, you know the rest, Tennessee legislators.

The principal promulgator of those promises was a man presented to us initially almost as the second-coming of Louis Pasteur—Dr. Anthony Fauci—who has proven to be no Pasteur.

Some of his pronouncements—the endless changes of mind about masks, vaccines and virtually everything else—that occurred every week or two may have been mistakes, but some were outright lies.

One recent example of the latter is when, under questioning at a congressional hearing by Sen. Rand Paul, a doctor himself, Fauci assured us he had no involvement with the funding of gain-of-function research at the Wuhan Virology Lab from the years before the pandemic began.

That obvious prevarication, thoroughly contradicted by email evidence and later by the NIH itself, may have more dangerous implications than we even know now.

What, in the end, is the difference between gain-of-function and bioweapons research and what role did Fauci have in it? (The NIAID directors’ erratic behavior and numerous evasive answers may stem from his need to hide his enmeshment with the communist Chinese.)

The second deception occurred not long ago and has clear implications for decisions before the Tennessee legislature during the “special session.”

When asked by a reporter about whether “natural immunity” (what occurs naturally from having had a disease) might work instead of vaccination, possibly be even better, Fauci acted as if he were surprised, as if NI were something he had only vaguely heard of, and waved off the question as something he would have to think about (in his spare time).

Who hasn’t heard of “natural immunity”? It’s taught in high school biology. Certainly Anthony S. Fauci, M. D., director of the National Institute of Allergy and Infectious Diseases since 1984, would have. Wouldn’t you agree, legislators? You undoubtedly heard of it too, back in high school and many times since. “Natural immunity” works.

Indeed, according to an Israeli study, “natural immunity” in the case of COVID-19, is multiple times more effective than the vaccines.

From the study: “SARS-CoV-2-naïve vaccines had a 13.06-fold (95% CI, 8.08 to 21.11) increased risk for breakthrough infection with the Delta variant compared to those previously infected.”

Thirteen-fold! Legislators, pop quiz: Which is more effective, natural immunity or the vaccines?

Even in the unlikely event the Israeli scientists are off by thirty or forty percent, the differences are still extreme. We all know the answer, so let’s skip to pop quiz II:

Why risk mandating vaccines to those who have already had COVID-19?

Why especially when we don’t know the extent of the side effects of these mRNA vaccines? This is particularly true for young people who are having or intending to have children.

Many of the them are young workers in Tennessee companies facing a terrible dilemma—take mandated shots that no one fully understands or wants, or resign from their jobs.

But don’t believe me. Believe Dr. Robert Malone—one of the key, if not the key, inventor of messenger RNA, the basis of the new vaccines—or Dr. Peter McCullough. Malone has said his invention is still in the trial stage and doesn’t recommend it for anyone under 65, let alone children or youth. And even for those over 65, he’s nervous.

If you’re a member of the Tennessee legislature about to vote on these mandates and have not seen video talks by these men, but have seen Fauci or the latest CDC bureaucrat, you are being hugely irresponsible in your decision-making.

But they’re only the tip of a medical iceberg that extends to the thousands, probably hundreds of thousands, of doctors across the globe who are vaccine skeptics, including the Frontline Doctors.

The medical profession is being corrupted by the state. Many of our longtime personal physicians live in fear they will be excommunicated from their profession if they dare speak out. It’s beginning to seem like the Soviet Union during the era of Stalin and Trofim Lysenko.

Those—like the current president—who most frequently tell us they are “following the science” are the ones least likely to be doing so.

Instead of pontificating at this week’s “session” as politicians, and, alas, pundits, are wont to do, here’s a short list of possible genuine accomplishments.

That last might be slightly “beyond the scope,” but at heart, it’s what it’s all about. If the “special session” does most, or even the majority of this, accompanied by the wholehearted support of Tennessee’s governor, it will be an example to the nation. The citizens of the state will rejoice and no longer suffer from “DeSantis envy.”

If they renege and this “session” is merely for show, we will know most of the reason why. It has been widely reported now that Pfizer has 700 (!) lobbyists in Washington. I don’t have the figures, but if there’s one thing that’s sure, the donations to politicians by Big Pharma are somewhere up there with Big Tech.

This time, legislators, try to ignore that incredible potential largesse. Everyone always mouths the platitude “it’s for the children.” This time, it is.