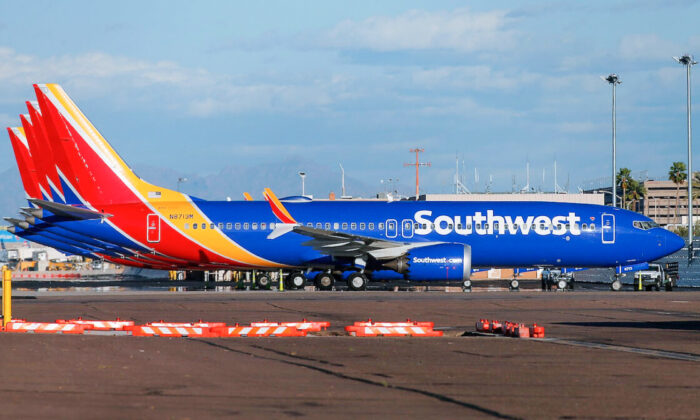 Southwest Airlines has canceled at least 1,000 Sunday flights as of 12 p.m. ET, according to flight tracker FlightAware, coming after numerous cancelations were reported Saturday.

“We experienced significant impact in the Florida airports [Friday] evening after an FAA-imposed air traffic management program was implemented due to weather and resulted in a large number of cancellations,” said Alan Kasher, who oversees Southwest’s flight operations, in a statement obtained by several news outlets on Saturday.

About 800 Southwest flights were canceled on Saturday, according to flight-tracking website FlightAware. Other major carriers, including American Airlines and Spirit Airlines, appeared to have significantly fewer disruptions.

Southwest declined to comment on whether cancelations were due to staffing shortages related to the firm’s recently announced COVID-19 vaccine mandate for employees. The Federal Aviation Administration (FAA), which oversees air traffic in the United States, also didn’t immediately respond to a request for comment.

Southwest said in a statement on Saturday that it is attempting to “return to close to normal operations as we move into Sunday.”

“We are working hard behind the scenes to minimize challenges and fully recover the operation as we take care of displaced Crews and Customers as quickly as possible,” the company said, without elaborating on the nature of the flight disruptions.

The firm’s Saturday statement also blamed the issue on air traffic control problems and the weather.

“We experienced significant impact in the Florida airports yesterday (Friday) evening after an FAA-imposed air traffic management program was implemented due to weather and resulted in a large number of cancellations,” Southwest said.

There was speculation on social media that the flight cancelations were being triggered by employees calling in sick en masse. In its statement Saturday, Southwest did not make reference to the speculation.

“Southwest Airlines must join our industry peers in complying with the federal government’s COVID-19 vaccination directive,” Southwest CEO Gary Kelly announced on Oct. 4, explaining that the company works as a federal contractor and needs to comply with President Joe Biden’s September vaccine mandate for federal employees and contractors. That prompted a lawsuit from Southwest’s pilot union, the Southwest Airlines Pilots Association, which is seeking a court injunction against the mandate.

On its website Saturday, the Southwest Airlines Pilots Association blamed the cancelations on “a number of issues, but we can say with confidence that our Pilots are not participating in any official or unofficial job actions,” in an apparent reference to speculations about employees calling in sick.

“Our Pilots will continue to overcome [Southwest Airlines] management’s poor planning, as well as any external operational challenges, and remain the most productive Pilots in the world,” the statement continued. “They will continue to be focused on their highest priority—safety.”

Meanwhile, on Sunday morning, there were long lines at Southwest’s ticket counter in the Tampa airport, according to local media.

B.J. Romero, a passenger, told Fox13, “I have two kids. I have appointments. I have work. I can’t miss work. I have people relying on me, so I have to be home. That’s not going to work for me.”

When asked about whether Southwest’s claim about bad weather caused mass cancelations, Romero balked at the suggestion. “That sounds like baloney to me,” Romero told the station. “The weather is fine in all connecting areas, there’s no bad weather.”

“There’s got to be something behind the scenes they’re not telling us.”