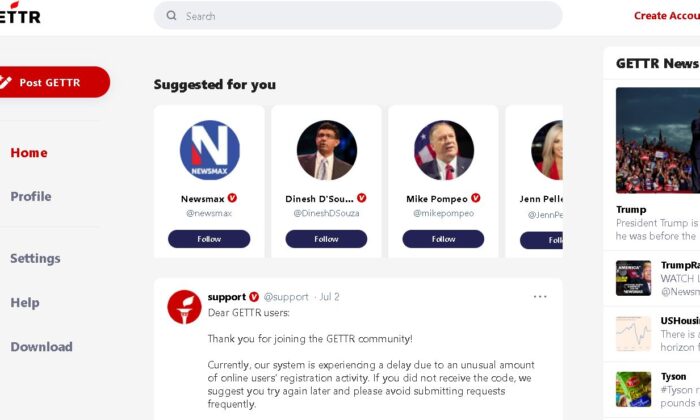 GETTR, the social media platform launched by an aide to former President Donald Trump, was briefly hacked hours after it was officially launched, according to the firm’s chief executive.

Jason Miller, the company’s chief executive, told Reuters that GETTR was briefly hacked on July 4 and noted that more than 500,000 people have signed up for the site so far.

“Brand new platform and Secretary Pompeo is already getting 5K likes for a Fourth of July post??? The #GETTR user engagement rate is amazing so far,” Miller, who left the Trump campaign last month, wrote on July 4.

However, the hack didn’t last long. The accounts were apparently breached at 8:30 a.m. and returned to normal by 10 a.m., reported Business Insider.

Baghdad told the website that he hacked the accounts “just for fun,” noting that GETTR’s team “should not publish the website before making sure everything, or at least almost everything, is secure.”

But Miller said the hack was detected and dealt with within minutes.

“You know you’re shaking things up when they come after you. The problem was detected and sealed in a matter of minutes, and all the intruder was able to accomplish was to change a few user names. The situation has been rectified and we’ve already had more than half a million users sign up for our exciting new platform,” he told Business Insider.

The website had a soft launch in late June before Miller told Fox News last week that it would be officially launched on the Fourth of July.

Guo Wengui, a Chinese businessman whose arrest has been sought by the Chinese Communist Party, has invested in the firm, Miller told The Wall Street Journal. Guo, who is also a frequent critic of the Chinese regime, doesn’t have a direct role or financial stake in GETTR, Miller said.

“I think a lot of people understand, with the United States, the desire for a new social media platform that’s really founded on these principles of free speech, independent thought, rejecting censorship and cancel culture,” Miller told the paper.

Over the weekend, the website acknowledged that there are other technical difficulties relating to the rollout.

“Currently, our system is experiencing a delay due to an unusual amount of online users’ registration activity,” a message from the administrators stated. “If you did not receive the code, we suggest you try again later and please avoid submitting requests frequently. We sincerely apologize for the inconvenience, and our team is actively working to resolve this issue. Thank you for your patience.”

Miller didn’t respond to a request for comment by press time.