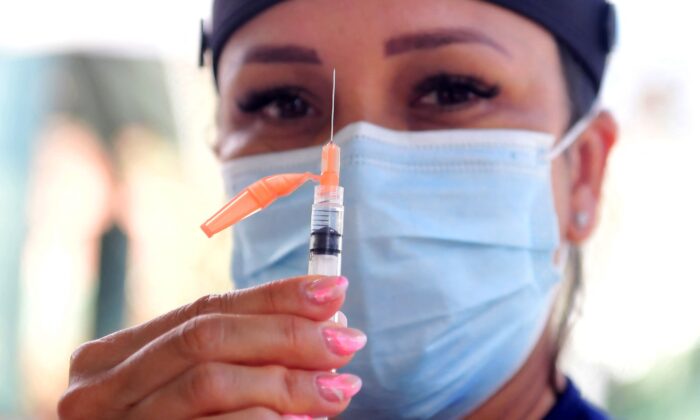 Every adult 18 and older in the United States who received the single-shot Johnson & Johnson COVID-19 vaccine will be able to get a booster dose if the Food and Drug Administration (FDA) accepts a recommendation from its advisory panel.

The panel unanimously voted Friday to advise the agency to authorize boosters for all adults, regardless of their health condition.

Members of the Vaccines and Related Biological Products Advisory Committee heard from the FDA and Janssen, the subsidiary of J&J that developed the jab.

Approximately 9,000 participants in J&J trials have gotten a second shot, though safety and effectiveness data was only submitted on a fraction of that number.

Like Moderna and Pfizer officials, who successfully convinced panel members to endorse boosters, Janssen scientists tried conveying twin messages: their vaccine is holding up well against severe disease, but should be boosted anyways to achieve the best effect, especially against infection.

“We want to provide optimal protection against COVID and we know that a booster dose will do that,” Dr. Penny Heaton, global therapeutic area head for vaccines at Janssen Research & Development, told the panel during their virtual meeting.

Trial data showed that a booster lifted the effectiveness of the vaccine from 70 percent against all symptomatic disease to 94 percent. Data showed no indication that adverse events were higher after the second dose, according to the company.

The FDA did not independently review most of the data. The agency claimed there was not enough time. But scientists with the agency said the data did seem to show boosters could convey a benefit, increasing the effectiveness for a shot that has thus far produced inferior results than the Pfizer and Moderna ones, both of which utilize messenger RNA technology.

J&J’s jab is an adenovirus vaccine, meaning it uses an inactivated version of the common cold virus to deliver genetic instructions that cause human cells to make the spike protein.

Panel members, a group of outside scientists, seemed convinced by the data, even after questioning why the vote had not been pushed back to enable regulators to conduct an independent analysis.

Driving the vote was a desire not to discourage people from getting the J&J shot and the hope that a booster will help its effectiveness get closer to its competitors.

“The overall perspective is that regardless of whether or not there’s been waning … the effectiveness or protection with a single dose of the J&J is not equivalent at this time with two doses of an mRNA vaccine and certainly not three doses,” said Dr. Amanda Cohn, a panel member, and the chief medical officer for the Centers for Disease Control and Prevention’s (CDC) National Center for Immunizations and Respiratory Diseases.

“I think this, frankly, was always a two-dose vaccine,” added Dr. Paul Offit, a panel member and a professor of pediatrics at the Children’s Hospital of Philadelphia. He noted that when the panel originally advised the FDA to authorize the jab, which it did, Johnson & Johnson had already completed primate trials of a booster and was initiating human studies.

The panel’s recommendation says the booster can be administered as soon as two months after the first shot, though data indicates the best protection comes after a booster at six months.

The FDA does not need to accept the panel’s advice but typically does.

Some members asked whether Janssen plans to file for FDA approval for the vaccine as a two-shot jab, given its inferior protection when given singly. Dr. Johan Van Hoof of Janssen said the plan is for now to ask for approval for a single-shot and a booster.

The CDC’s advisory panel is set to consider boosters for the Moderna and J&J COVID-19 vaccines next week.