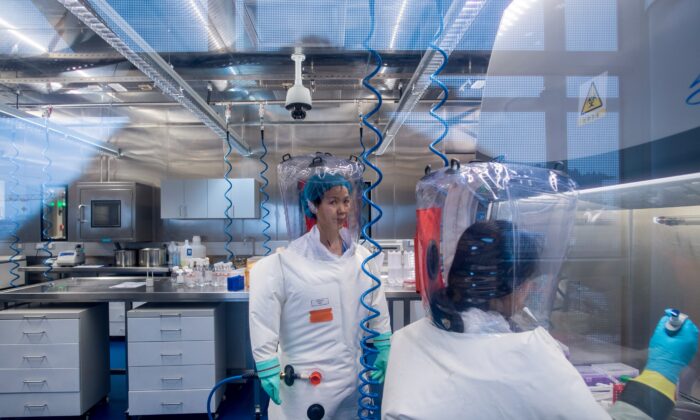 Virus named RaTG13 was discovered in an abandoned mine in Mojiang, Yunnan, nearly 10 years ago
By Jeff Carlson and Hans Mahncke
biggersmaller
Print

Shi Zhengli, the director of the Center for Emerging Infectious Diseases of the Wuhan Institute of Virology (WIV), is the common thread through which many key research projects and gain-of-function experiments on coronaviruses are connected.

Her work shows a curious pattern of deception, tracing through her publications from 2013 to 2020, in which a key source for the coronavirus most closely related to COVID-19 was concealed.

In 2002, an outbreak of the novel coronavirus known as SARS resulted in the deaths of 774 people worldwide. Investigations quickly established that the virus spread from bats to civets and then on to people.

The SARS outbreak would prove to shape Shi’s career, moving her from field research to work in level-2 biosafety labs before culminating in gain-of-function experiments in China’s first and only level-4 lab, located in Wuhan.

Her search for the originating source of the SARS outbreak began in 2004, when she joined an international team of researchers to collect samples from bats in Southern China.

Shi’s early research was captured in a 2005 article, in which she reported that “species of bats are a natural host of coronaviruses closely related to those responsible for the SARS outbreak.”

Shi and her team would continue their search for the source of the 2002 outbreak for years, and the samples her team collected were sent to Wuhan for analysis and further experimentation.

On Dec. 12, 2007, Shi and her team published a paper in the Journal of Virology that showed how viruses could be manipulated to infect and attack human cells using an HIV-based pseudovirus. This experiment, funded by the Chinese Academy of Sciences, was the first indication that Shi’s Wuhan laboratory was acquiring the technologies and skills required to manipulate viruses collected in the wild.

In June 2010, Shi co-authored a paper showing that her team had built on the 2007 experiments by manipulating additional bat virus specimens and testing their interactions with human SARS-CoV spike proteins. They found that the “alteration of several key residues either decreased or enhanced bat ACE2 receptor efficiency.” The study was again funded by the Chinese Academy of Sciences.

In 2011 and 2012, Shi and her team conducted a “12-month longitudinal survey” of a colony of horseshoe bats “at a single location in Kunming city, Yunnan province, China.” This single location was Shitou Cave.

While Shi and her team were conducting their survey at Shitou Cave, an unrelated group of six workers began clearing bat excrement from a copper mine shaft in Mojiang, Yunnan—approximately 200 miles away from Shi’s group—according to The Sunday Times.

In April 2012, according to The Wall Street Journal, those six workers became seriously ill from a pneumonia-like disease that resulted in the deaths of three of the men. Notably, all of the public reports state that the mine shaft was abandoned, but none of those same reports explain why the six miners were there to clean the shaft out.

There was no media mention of this strange, isolated outbreak, and as the Sunday Times notes, there “appears to have been a media blackout” surrounding the entire incident.

Shi and her team, fortuitously already in the region during this new outbreak, abruptly shifted both their focus and location and spent the next two years collecting samples from bats located in the mine at the Mojiang location.

A virus allegedly found in one of these samples was later revealed to be the closest known match to the virus that causes COVID-19.

The finding of this particular viral sample appears to have been akin to finding a needle in a haystack. Although the Mojiang location turned up vast amounts of coronaviruses, only one of them resembled SARS and was reportedly found in a single fecal sample. Shi’s team named the virus RaBtCoV/4991.

Peter Daszak, the president of EcoHealth Alliance, confirmed the fortuitous finding to The Sunday Times.

“It was just one of the 16,000 bats we sampled. It was a faecal sample, we put it in a tube, put it in liquid nitrogen, took it back to the lab. We sequenced a short fragment,” he said.

It isn’t known whether Daszak, who used funding from the National Institutes of Health to provide the WIV with grants to research bat coronaviruses, was present at the Mojiang mine site, but he’s a co-author of a paper describing the group’s findings.

The more complete tale unfolds in an examination of five articles in Western science journals that Shi and her research collaborators published between 2013 and 2020.

An Oct. 30, 2013, paper written by Shi and Daszak highlighted the first-ever “isolation and characterization of a bat SARS-like coronavirus that uses the ACE2 receptor.”

Their paper noted that their “results provide the strongest evidence to date that Chinese horseshoe bats are natural reservoirs of SARS-CoV, and that intermediate hosts may not be necessary for direct human infection by some bat SL-CoVs.”

In other words, their 2013 paper specifically noted the possibility of direct transmission from bats to humans.

The paper also referred to the “first recorded isolation” of a live SARS-like coronavirus known as WIV1—apparently shorthand for Wuhan Institute of Virology 1. The virus was isolated from fecal samples taken from the horseshoe bats.

By this time, Shi had spent almost two years collecting bat samples from the Mojiang mine. Notably, her scientific papers make no mention of the mine, of the 2012 outbreak, or of the miners or their deaths.

As their 2013 paper notes, the group claimed that all of their results came from a “single location in Kunming, Yunnan Province, China”—the location of Shitou Cave.

More specifically, Shi’s 2013 paper, along with a follow-up paper in November 2015, appeared to intentionally conceal her years-long work at the Mojiang mine, as well as the crucial fact that the mine—not the bat cave in Kunming—was the true source for what would become known as the closest relative to the virus that causes COVID-19.

The 2015 article written by Shi, along with Ralph Baric of the University of North Carolina and others, revisited the presence of the virus in horseshoe bats. Notably, the article doesn’t directly specify the location from which the virus was sourced, but instead uses a footnote to reference the 2013 article, which claimed that the source came from a “single location in Kunming”—the location of Shitou Cave.

The paper notes that “a SARS-like cluster of circulating bat coronaviruses shows potential for human emergence.” The researchers observed that some of the viruses that they found “replicate efficiently in primary human airway cells.”

The researchers stated that their work “suggests a potential risk of SARS-CoV re-emergence from viruses currently circulating in bat populations.”

But again, just like her 2013 article, no reference to the Mojiang mine as the actual source was made.

However, within less than three months, in a follow-up to the November 2015 paper, Shi and her team acknowledged in a February 2016 article that they had “conducted a surveillance of coronaviruses in bats in an abandoned mineshaft in Mojiang County, Yunnan Province, China, from 2012–2013.”

In this same article, Shi admitted that she obtained a virus called RaBtCoV/4991 from 276 bat fecal probes that “were sampled in a mineshaft in Mojiang.” As we now know, the RaBtCoV/4991 virus has been shown to be the closest known match to the virus that causes COVID-19.

Shi renamed this same virus as RaTG13 in early February 2020—just as the COVID-19 pandemic had begun to emerge.

A database of bat viruses published by the Chinese Academy of Sciences—the parent body of the WIV—confirms that the RaBtCoV/4991 virus was “discovered on July 24, 2013, as part of a collection of coronaviruses that were described in the 2016 paper on the abandoned mine,” The Times reported.

The Chinese database specifically references Shi’s Feb. 18, 2016, paper, which makes note of the mineshaft in Mojiang, along with the discovery of multiple coronaviruses—including the new SARS-like strain—but makes no mention of the 2012 respiratory outbreak, nor of the resulting deaths of the miners.

In 2017, Shi and her team would once again shift focus away from the Mojiang mine and back to Shitou Cave, claiming: “We have carried out a five-year longitudinal surveillance (April 2011 to October 2015) on SARSr-CoVs in bats from a single habitat in proximity to Kunming city, Yunnan Province, China”—the region where Shitou Cave is located.

For reasons yet unknown, any mention of the Mojiang mine, where Shi and her team spent two years collecting bat samples culminating in the discovery of the closest known relative to COVID-19, was once again conspicuously omitted.

One of Shi’s co-authors on the 2013 and 2017 articles, Linfa Wang, has since come to prominence as a vocal proponent of the natural origins theory pertaining to the virus. Wang, a member of the World Health Organization’s Emergency Response Team for the COVID-19 outbreak, discussed the issue of funding with National Geographic in June 2020, noting that when it comes to infectious diseases, “people never realize there’s a huge return.”

“When we have prevented small outbreaks, people don’t care. It doesn’t get media attention,” he said.

Wang, who has been collaborating with Shi since at least 2005, finished by asking a question that called to mind the 2012 outbreak at the Mojiang mine:

“In Wuhan, if three people died and it was controlled, would we know it? No. This is happening all the time. It’s just in remote villages where people die. You bury them and end of the story, right?”

Of the many articles written regarding their multiyear work, only the 2016 piece acknowledges the existence of the Mojiang mine. And, again, nowhere does Shi or her team make any mention of the actual outbreak and the deaths of three of the six infected miners.

Shi’s years-long possession of the virus found in the Mojiang mine was suddenly highlighted on Feb. 3, 2020, when Shi and her collaborators published a new article stating that scientists at the Wuhan lab had a close match to the virus that causes COVID-19.

Shi called this virus RaTG13, a name that hadn’t previously appeared in any of her articles. The 2020 article was notably vague about the origins of this new virus, simply stating that it “was previously detected in Rhinolophus affinis from Yunnan province.” As independent researchers later found out by comparing genome sequences from archived Chinese databases, the virus that Shi referenced in 2020 was actually RaBtCoV/4991, the virus that was taken from the Mojiang mine back in 2012 and written about in 2016.

In November 2020, as more facts were uncovered in relation to the virus’s origins, Shi suddenly added an addendum to her February 2020 article, finally admitting that COVID-19’s closest known relative had come from the Mojiang mine. However, Shi referred to the Mojiang mine as a “mine-cave” and “cave,” once again blurring the lines between the Mojiang mine and the Shitou Cave, located 200 miles apart.

In this addendum, Shi acknowledged that she had renamed the virus from RaBtCoV/4991 to RaTG13, supposedly in order to “reflect the bat species.” However, both the previous designation and the new designation carry the letters “RA”, which stand for Rhinolophus affinis, the Latin term for intermediate horseshoe bats.

Notably, Shi’s 2020 article also alleged that the pandemic had “started from a local seafood market.” That false claim, which has been disproven, wasn’t addressed in Shi’s addendum.

Although it isn’t yet known precisely why Shi obscured the true origins of RaBtCov/4911 and obfuscated her 2013 discovery, it’s undeniable that Shi quietly kept the closest known relative to COVID-19 in her Wuhan lab for at least seven years and failed to address her discovery’s true origins.

Jeff Carlson and Hans Mahncke are co-hosts of the program “Truth Over News” on EPOCH TV.