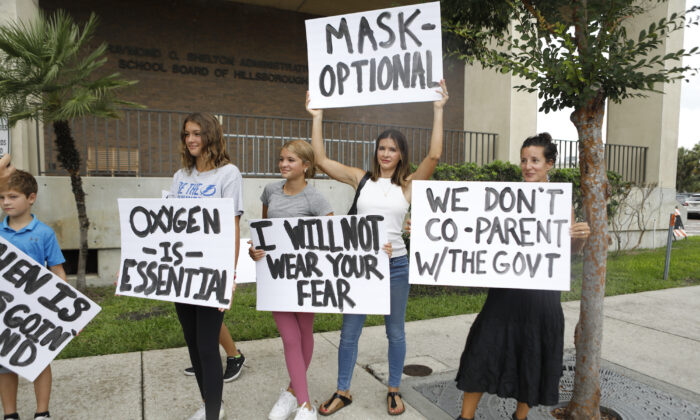 The national organization of public school boards is calling on the Biden administration to protect its members from “angry mobs” of parents who protest against COVID-19 restrictions placed on students and the teaching of critical race theory, characterizing the protests as “domestic terrorism.”

The National School Boards Association (NSBA), which represents more than 90,000 school board members in the United States, wrote in a Sept. 29 letter (pdf) to President Joe Biden that the federal government must “deal with the growing number of threats of violence and acts of intimidation occurring across the nation.”

The letter moves on to cite incidents of “threats or actual acts of violence” against school leaders, alleging that parents who sought to express their opposition to mask and COVID-19 vaccination policies have been “inciting chaos” during school board meetings. It also denies critical race theory is being taught in classrooms, and describes parents’ attempts to hold school board members accountable by posting watchlists online as “spreading misinformation.”

Specifically, the NSBA asked that federal agencies such as FBI, the Secret Services, and the Departments of Justice and Homeland Security “investigate, intercept, and prevent the current threats and acts of violence” by whatever “extraordinary measures” necessary.

The call for support comes days after the National Association of Secondary School Principals (NASSP) made a similar request, arguing that the federal government needs give school leaders the authority to expel “threatening individuals” from their schools.

“At the very least, we need the U.S. Department of Education to issue specific guidance on the authority school leaders have to protect themselves and our ability to remove or ban hostile parents and individuals from school grounds who threaten our safety,” said NASSP CEO Ronn Nozoe in a Sept. 16 statement.