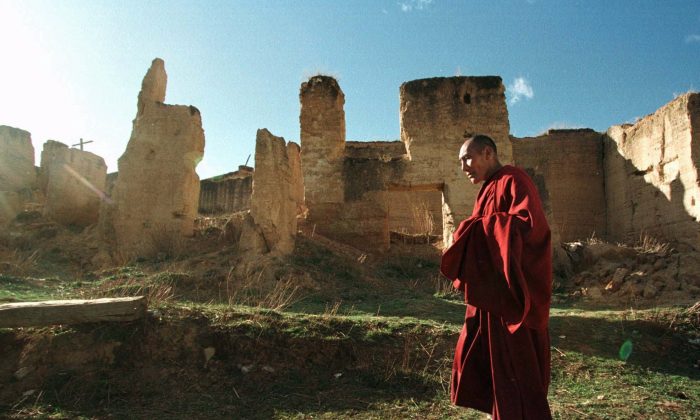 A Tibetan monk walks past ruins at the Gedan Songzan Monastery at Zhongdian, in China's Yunnan Province, on April 23, 1998. Much of the 300 year-old monastery was destroyed by radical communists during China's Cultural Revolution. (Greg Baker/AP Photo)
Thinking About China

Religious Freedom in China Is a CCP Myth

Religious expression is tightly managed by the Chinese Communist Party (CCP) in order to propagate socialist policies in support of state objectives.

The agitprop in communist China’s state-run media never stops, but sometimes the lies are beyond the absurd. This is especially true as it relates to the discussion of religion—or, rather, its suppression. For example, here is a headline from the English version of state-run China Daily: “Religious freedom, ethnic unity highlighted.” Note the first sentence from that trash article (emphasis added): “Xi Jinping, general secretary of the Communist Party of China Central Committee, has underlined the importance of fully implementing the Party’s theories and policies concerning ethnic groups in order to further promote equality, unity, mutual assistance and harmony among all of them.” The reality is that those laudable goals are arbitrarily determined by the CCP, not through free religious expression by a free people.

Let us examine the reality of “religious freedom” in China because that China Daily article masks decades of communist persecution of the religious in the country.

Like Marxists everywhere throughout history, the CCP since its founding in 1921 has practiced thought control by ruthlessly persecuting religious people. Except for five state-recognized religions, the CCP through the Religious Affairs Bureau (RAB) banned the practice of other religions when it seized power in 1949. RAB measures over the years have involved thought control, persecution, and the squelching of any religious thought that is not in line with CCP policies.

All religious organizations and practices were further constrained during the madness of Mao Zedong’s Cultural Revolution (1966–1976). Millions of religious Chinese were persecuted, tortured, and killed during this period.

Since 1949, there are five religions formally recognized by the Chinese Communists (ChiComs): Buddhism, Taoism, Protestantism, Catholicism, and Islam. Formal recognition equates to government permission given to central churches to operate legally under the watchful eyes of local municipal public security bureaus and the United Front Work Department.

The religious persecution in Xi’s China is comprehensive and pervasive. According to a Freedom House report in 2020:

• All religious leaders are vetted for political reliability, for example, adherence to CCP policies.
• Limits are placed on the number of priests, pastors, and other religious leaders.
• At least 100 million Protestant Christians, Tibetan Buddhists, Uyghur Muslims, and Falun Gong practitioners face persecution in some form.
• Especially targeted are Muslims in Xinjiang where the coercion has suppressed the wearing of traditional religious attire, mosque attendance, and even the choice of names for newborns.
• The state-run reeducation camps in Xinjiang use a points-based system for measuring the effectiveness of ideological “reeducation” efforts and determining detainees’ eligibility for release.

Pressure on religions in China was dramatically increased with the implementation of new rules for religious groups in early 2020. Six chapters and 41 articles detailing the new administrative measures govern the “organization, functions, supervision, and management of religious groups.” Article 3 states that religious clergy should “love the motherland, support the leadership of the Chinese Communist Party (CCP), and support the socialist system.” One of the objectives of these new measures is to reinterpret Christian teaching according to socialist doctrine as interpreted by the CCP. All religions are coerced to highlight Chinese culture and support the leadership of the CCP in their religious practices.

The pressures on so-called “illegal religions” have been accelerating in 2021, too, as reported by Chinascope. Illegal religions refer to “Christian house churches, Catholic underground churches, or some Buddhist, Taoist, Islamic or other religious organizations that do not participate in official religious activities,” according to Chinascope. Only the five tightly controlled and corrupted state-approved religions are allowed to practice perverted versions of their religious activities in China. The ability of people to freely express their religious faith is simply not permitted in the country.

The purpose of religious persecution is to control the very private thoughts and beliefs of the Chinese people: It is all about control of all religious activities and expression to ensure conformity of state-approved thought among all citizens. It is also a form of psychological warfare against Chinese citizens—a constant pressure to conform to CCP policies in thought, word, and deed. The free exchange of religious ideas, especially those pointing to a spiritual power higher than the government, is antithetical to the Chinese regime and cannot be tolerated, as such concepts undermine CCP control and authority.

“Official religious activities” is a typical Marxist euphemism that refers to organized churches that can be easily monitored and controlled by the government and its informers, especially Beijing’s United Front Work Department. As reported by Chinascope, Pastor Liu Yi, who fled CCP persecution to establish the Chinese Christian Fellowship of Righteousness in California, made this statement based on direct personal experience: “The [CCP] have used the pulpit of the church to become the mouthpiece for propagating the policies of the Chinese Communist Party. For example, the ‘sermons’ from a church in Zhejiang circulating online are very telling. They are not preaching the Bible, but rather, the propaganda of the Communist Party.”

So much for “official religious activities” approved by the communists! Official churches in China are neutered just like the Russian Orthodox Church was during the Soviet era (and since).

Falun Gong adherents are also persecuted mercilessly by the CCP, who view them as a direct threat to CCP legitimacy because they are an indigenous religious movement outside of government control, compared to the five heavily-regulated “official” foreign religions. The three tenets of Falun Gong are truth, compassion, and tolerance, which are completely antithetical to ChiComs. The CCP often leverages traditional Chinese cultural xenophobia to control the masses and stir up animosity against foreign religious practices. That doesn’t work well with the homegrown Falun Gong, whose adherents practice large-scale civil disobedience and propagate underground anti-CCP literature with impunity, making them a top priority for suppression by the CCP.

In mature communist societies where the communist party has maintained control for decades, religious persecution generally waxes and wanes as the communists feel more—or less—secure in their political control. Despite that “cheery” agitprop article from China Daily, religious persecution in China is increasing—especially of ethnic Uyghurs, Tibetans, and the Falun Gong. This just might be an indication that Xi and the Central Committee feel threatened by world events and seek to ensure “domestic tranquility” in order to better focus on foreign affairs. A docile citizenry is critical to CCP pursuit of interests beyond the mainland, not the least of which include Hong Kong, Taiwan, and Afghanistan.

Religious freedom in China—like virtually all of the narratives propagated by Chinese state-run media—is a myth. In fact, the obverse is true. Religious persecution is ratcheted up whenever CCP control is determined to be threatened. As the world finally discovers the true origins of the CCP virus (commonly known as the novel coronavirus), as well as the extreme measures taken by the Chinese regime to destroy and withhold medical data from other countries, the pressure for accountability and restitution will continue to build.

Despite the frantic efforts from the CCP-controlled state media to shift the blame to others, increased religious persecution in communist China might well be a harbinger of grim times ahead—for the Chinese people themselves and very likely the rest of the world, too, as the CCP regime faces mounting pressures.