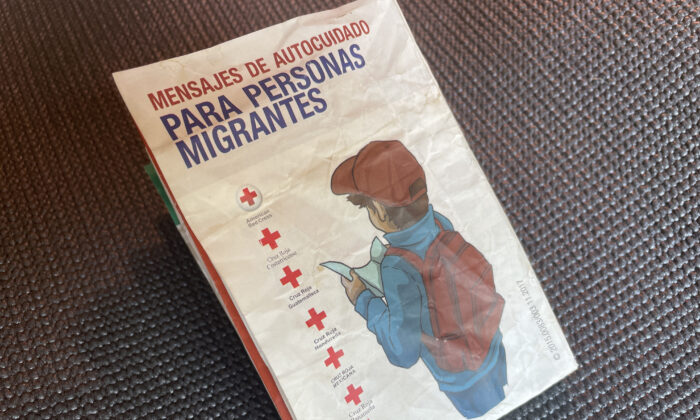 A Spanish-language pamphlet published by the Red Cross titled "Messages of Self-Help for Migrants" was being carried by an illegal immigrant in Uvalde, Texas. (Charlotte Cuthbertson/The Epoch Times)
Immigration & Border Security

A Spanish-language flyer by the Red Cross provides detailed routes to the US southern border, shelter locations, and instructions on how to jump off a moving train safely
By Charlotte Cuthbertson
biggersmaller
Print

UVALDE, Texas—Rancher John Sewell recently picked up a pamphlet that had fallen from the backpack of an illegal immigrant who was trespassing on his property near Uvalde, Texas—about 50 miles from the U.S.–Mexico border.

On one side is a map that details transport routes from Panama to the United States. It pinpoints in great detail where migrants can find shelter or get medical help along the way. The other side is full of useful information, in Spanish, including how to more safely travel through forests and jungles, find shelter, get medical help, and deal with immigration authorities.

It was published by the Red Cross and is titled “Messages of Self-Help for Migrants.”

The pamphlet crosses a line beyond providing life-saving information to facilitating illegal immigration, according to Jessica Vaughan, director of policy studies at the Washington-based Center for Immigration Studies.

“It’s practically a road map or a TripTech for an illegal migrant,” she told The Epoch Times. “It’s one thing to give out water to migrants. It’s quite another thing to help them migrate illegally—and breach the sovereignty of a border.”

The pamphlet includes advice such as that “it’s always safer to travel in a group, especially for women,” and to stay in contact with relatives and friends, “especially before crossing the border.”

It goes on to say: “Don’t hide in vehicles or in small places where you might suffocate, drown, or get sick. Be sure you have enough space to breathe.”

In Uvalde, where Sewell obtained the pamphlet, Border Patrol has seen a 911 percent increase this year in stowaway illegal aliens on freight trains traveling from the border to San Antonio.

On Aug. 13, on one train inspected by Border Patrol, agents found 20 illegal aliens hiding in the beds of new pickup trucks being hauled in two different train cars. Several of the aliens had been apprehended the previous day by the same agent at the same location. All were single males from Mexico and Honduras.

The map also highlights Red Cross shelters in Mexico and other places that are run by religious organizations, such as the Good Samaritan House in Oaxaca, Mexico, and Catholic Charities in Tucson, Arizona.

Vaughan said that, rather than being a “benign underground railroad-type of exercise,” the pamphlet is “enticing criminal behavior that is also very, very dangerous and illegal.”

She said the Red Cross and other humanitarian organizations should be telling migrants not to come. She said most illegal immigrants entering the United States don’t meet the criteria for asylum and won’t be granted asylum status by an immigration judge. Many Central Americans, the largest population of illegal immigrants, don’t end up claiming asylum once they’re in the United States, and of those who do, less than 15 percent are granted relief.

A spokesperson for the International Committee of the Red Cross (ICRC) said the organization doesn’t prevent or encourage migration.

“As an impartial, neutral and independent organization, our actions are focused on addressing the humanitarian needs of migrants to ensure they are treated with dignity, both in their countries of origin, transit and destination, and regardless of their immigration status,” the spokesperson told The Epoch Times via email.

The ICRC didn’t respond to a question asking where it makes the pamphlets available, but the Red Cross logos from seven countries are printed on the flyer, including the United States, Mexico, Guatemala, Honduras, El Salvador, Costa Rica, and Panama.

The spokesperson said the organization provides humanitarian assistance at key points along the route.

“We also inform them of risks they’re undertaking while using the migration route,” the spokesperson said.

“It is essential to prevent the loss of lives and to promote a humanitarian approach. Addressing the needs of this vulnerable population is a shared responsibility, of the authorities in the countries of origin, transit and destination, and of the international community.”

The Geneva-based ICRC operated in 100 countries in 2019 and spent more than $2 billion, according to its latest annual report. It is funded mainly by voluntary donations from governments, and national Red Cross and Red Crescent societies, according to its website.

Vaughan said the United States should investigate how the flyer came to be published and with whose funding.