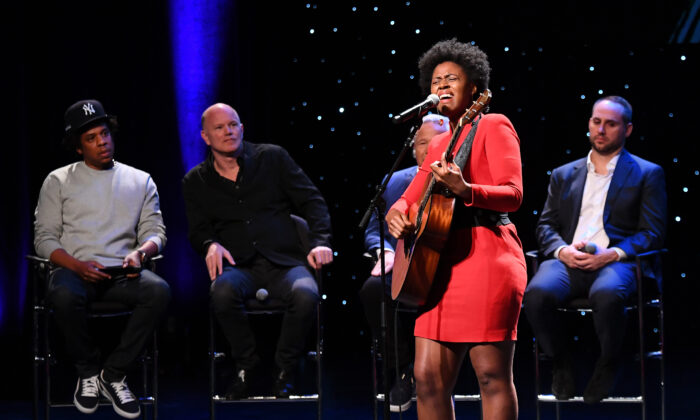 An appearance by Grammy Award-winning singer-songwriter Victory Boyd to perform the national anthem at the NFL’s Sept. 9 season-opening game in Tampa, Florida, was canceled by the league because she declined for religious reasons to be vaccinated against the CCP virus.

“As I understand that Victory will not be fully vaccinated by the time of the Kickoff game, she would not have been able to comply with the terms of the Game Day Field Access Policy,” Seth Dudowsky, the league’s senior director for media and entertainment events, told Boyd’s father and manager, John Boyd, in an Aug. 31 email made available to The Epoch Times.

“And as a result, we unfortunately will not be able to invite Victoria to perform the national anthem at this year’s Kickoff game,” Dudowsky said.

The defending Super Bowl champion Tampa Bay Buccaneers’ home field is Raymond James Stadium, an open-air venue. The 2021 season-opening game is to be played against the Dallas Cowboys.

“The NFL’s Game Day Field Access Policy requires that all individuals accessing the playing field and surrounding sideline areas within the stadium bowl (including individuals involved in game presentation elements such as the singer of the national anthem) be fully vaccinated.

“Under the Policy, ‘fully vaccinated’ means 14 days have passed since the individual received the final dose required in the vaccine sequence, in accordance with guidance from the Centers for Disease Control and Prevention. This requirement is mandatory and fully complies with the laws applicable to the type of business relationship contemplated here, and we are not in a position to make an exception,” Budowsky told Boyd in the email.

Dudowsky thus ended weeks of negotiations that initially excited both Boyds because, in addition to a $20,000 performance fee, the occasion provided invaluable national television exposure on one of the NFL’s most-watched games other than the Super Bowl.

The NFL also agreed to cover the travel costs of Boyd and her entourage, “as well as all costs, expenses, and fees related to the services of all of Artist’s support personnel in connection with the Performance and all related obligations,” according to a copy of the contract reviewed by The Epoch Times.

The contract was the result of the negotiations but hadn’t yet been officially signed by the parties to it.

The 27-year-old singer-songwriter blends soul and folk music and has twice before sung the national anthem at NFL games. She was a member of the team that produced Kanye West’s Grammy Award-winning “Jesus Is King,” 2020’s top contemporary Christian album.

Boyd was the primary lyricist for the album’s “Closed on Sunday” and “God Is” songs and she made additional contributions to “Water.” Her music is available on Shawn “Jay-Z” Carter’s Roc Nation label.

Her grounds for declining to be vaccinated are rooted in her Christian faith, she told The Epoch Times:

“The Bible admonishes Christians to appreciate their bodies as being sacred and a temple of the Holy Spirit and to not participate in things that can defile the body or render the body dysfunctional.

“I am in prayer to make sure that the Lord guides me into the right decision concerning receiving an unproven injection with artificial properties that can potentially have a long-term effect on my reproductive health.

“If I want to take the vaccine, the decision will be between myself, my doctor, and my God. At this point, the Spirit of God is leading me to take a stand for freedom of choice.”

She also told The Epoch Times that she worries the NFL decision to cancel her for not being vaccinated may herald more disheartening restrictions throughout the music and entertainment industries.

“Throughout my life, I have overcome many obstacles, but now, I was faced with a new glass ceiling that I couldn’t break through. It feels like we’re going backwards to a familiar place that I thought we had overcome as a country,” Boyd told The Epoch Times.

“To be disqualified because of a discriminatory policy that had nothing to do with my talent made me feel alarmed because of what it implies for not only myself but millions of others,” she said.

Dudowsky declined to respond to The Epoch Times’ email request for comment, referring it instead to Brian McCarthy, a league spokesman. McCarthy declined to say if the NFL places a higher value on ratings and entertainment than on First Amendment rights, including freedom of religion.

John Boyd told The Epoch Times that he’s mystified by the NFL’s adamant refusal to make any accommodation of his daughter’s religious and medical rights.

“My response to the final position of the NFL was one of utter disbelief because I didn’t understand why a single person that was willing to comply with all other NFL COVID protocols and submit verification of a current COVID-19 negative test was not allowed to sing the National Anthem in an open-air stadium. It made no common sense to me that the NFL was not willing to make any accommodation,” he said.

John Boyd added in a separate email that he believed “if accommodations were made for tens of thousands of mask-less, unvaccinated fans screaming over the field and many unvaccinated players running back and forth on the field, surely an accommodation could have been made for a single singer (standing alone distanced from all other people) to sing the National Anthem on the sidelines for only a minute and 45 seconds.”

The immovable NFL policy was first announced to franchise owners and officials, coaches and players, in a July 1 memo that detailed processes to be followed by everybody involved with a game, including NFL staff, members of the news media, game coaches, officials on the field and the sidelines, and entertainers.

Significantly, NFL players aren’t required to be vaccinated, but those who decline to do so are required to submit to a daily test. A positive result means the player can’t play in a game or participate in practice sessions until he has five consecutive negative daily tests.

In a tense telephone conversation prompted by Dudowsky’s Aug. 31 email, the NFL official told John Boyd that while he understood the manager’s concerns, “unfortunately, that is the NFL’s policy that the NFL has stated both privately and publicly, this is not something we’re running from or hiding.”

Dudowsky told Boyd that “there are players pushing back on this policy,” but “the league does feel it has control over its venues, the fields, and the protocols.”

Dudowsky said the NFL’s decision to not accommodate Boyd’s request to be allowed to perform in an alternative setting on the sidelines or elsewhere in the stadium wasn’t a legal issue.

“That is a decision by the NFL, by our events team and our entertainment team,” Dudowsky told Boyd. He also acknowledged that the NFL made extensive accommodations to entertainers and others during the 2020 season due to the virus that causes COVID-19.

“This is our first big one for a national broadcast and it is important that we are showcasing a singer on the field for the first time, other than the Super Bowl, in the last year,” Dudowsky told Boyd.