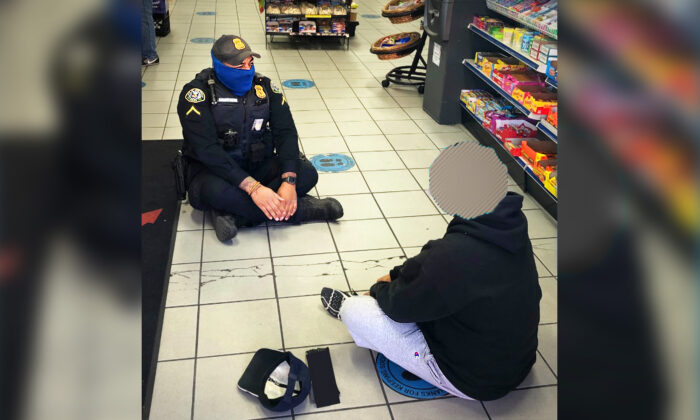 Two Maryland police officers are being praised for their kindness after responding to a call from a gas station. A man believed to be having a mental health crisis was met with compassion as the officers took time to calm him down and de-escalate the situation.

“Not everyday situation you have to arrest somebody, right?” Hyattsville officer Edgar Andrickson-Franco told NBC. “That’s not our job. Our job is to help.”

Andrickson-Franco and officer Mancini Gaskill responded to the call from Sunoco gas station on Hyattsville’s East West Highway on March 13.

A gas station employee had told the 911 operator the man was acting “disorderly and possibly intoxicated,” according to CBS.

Upon arriving, Andrickson-Franco recalled the suspect acting incoherently. “We engaged in conversation with him and we didn’t want to be too overbearing,” said Gaskill.

When the agitated man got down on the ground, Andrickson-Franco sat down next to him. When the man became verbally abusive, the officer refrained reacting.

Gaskill snapped a photo of the kind interaction, which the Hyattsville Police Department later shared on Facebook, captioned, “They built a rapport that allowed the officers to call the gentleman’s family and get him the medical assistance he needed.”

By building trust, the officers were able to de-escalate the crisis and persuaded the man to hand over his cell phone. They made contact with his relatives who arrived at the gas station to pick him up.

A grateful family member told police their relative may have mixed up his medication following a procedure weeks earlier, affecting his behavior, reports CBS.

Overall, the encounter was “an example of what our officers do every day,” said Hyattsville police spokesperson Adrienne Augustus.

“They do frequently help people, we just don’t always have the photos and the videos to share.”

Officers Andrickson-Franco and Gaskill have demonstrated the department’s compassionate approach by giving a troubled man the space and time to resolve his crisis. “I let him know I was there to help him out,” said Andrickson-Franco.