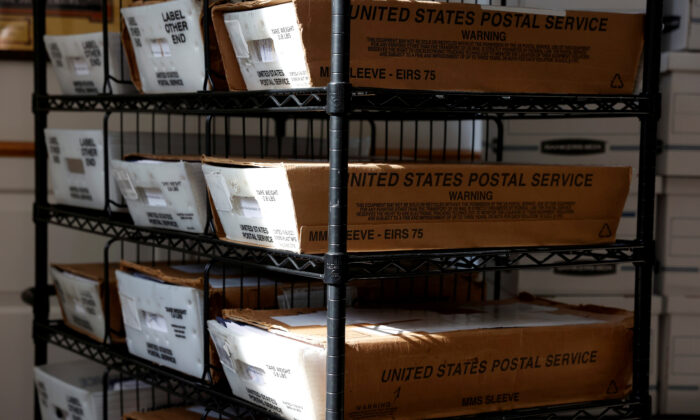 Boxes with mail-in ballots wait to be counted at the Northampton County Courthouse on Election Day in Easton, Penn., on Nov., 3, 2020. (Rachel Wisniewski/Reuters)
US News

A Pennsylvania man was sentenced to five years’ probation after admitting to casting an illegal ballot during the Nov. 3 election.

Bruce Bartman, 70, apologized to Common Pleas Court Judge Richard Cappelli during a hearing on Friday, saying he “made a stupid mistake” when he illegally cast a mail-in ballot for his deceased mother.

The man’s attorney, Samuel Stretton, said in court that Bartman’s decision was “a very misguided political mistake, and very stupid.” The illegal ballot he cast was for former President Donald Trump.

Bartman entered a guilty plea to two counts of perjury and one count of unlawful voting. Aside from the probation sentencing, Bartman will not be allowed to vote in an election for four years and cannot serve on a jury.

Delaware County District Attorney Jack Stollsteimer stated that he believed that “justice has been served” with the guilty plea, according to the Philadelphia Inquirer.

“There’s not public benefit to him being incarcerated,” Stollsteimer said. “This defendant from the beginning has accepted responsibility for his actions, and he has paid the price for them.”

Bartman used the driver’s license number for his mother, who died more than a decade ago, and registered her to vote before obtaining a mail-in ballot which he cast in her name.

Officials also said that he registered his deceased mother-in-law to vote but didn’t receive an absentee ballot.

“This criminal investigation and prosecution by my office should serve as a roadmap for meaningful reform for the Pennsylvania legislature and officials reviewing our voter systems,” Stollsteimer said in a statement. “Our office has done what it can to ensure our elections are both secure and accessible but the next fight is in Harrisburg. To those reviewing voter systems, I say, ‘Remove failed systems, not ballot boxes.'”

Georgia’s voting law so far has generated the most controversy. The bill, signed in March by Gov. Brian Kemp, adds more identification requirements for individuals who wish to vote by mail, among other provisions.

The Supreme Court earlier this month also rejected a lawsuit regarding a Pennsylvania voting dispute over the state’s mail-in ballot initiatives.