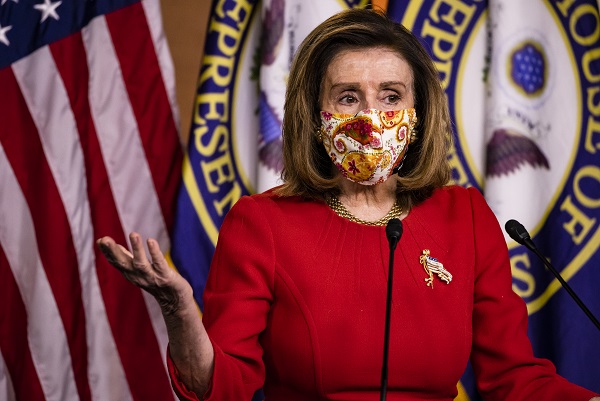 Speaker of the House Nancy Pelosi (D-Calif.) speaks during her weekly press conference at the Capitol in Washington on Feb. 11, 2021. (Samuel Corum/Getty Images)
Democrats

As Democrats prepare for an upcoming legal battle over raising the debt ceiling later this month, Speaker of the House Nancy Pelosi (D-Calif.) is looking at attaching a limit increase to the Senate-passed infrastructure bill or Sen. Sanders’ (I-Vt.) $3.5 trillion budget resolution.

The debt ceiling, the federal government’s borrowing limit, can only be raised through congressional action. Should Congress fail to raise the borrowing limit, the U.S. government would face default, a move which Treasury Secretary Janet Yellen says should be “unthinkable.” Such a default, Yellen warned, “would have absolutely catastrophic economic consequences.”

Debt raises are unpopular with the American people, some polls show (pdf).

But a debt ceiling increase is absolutely essential to Democratic policy priorities, as they delegated $1.9 trillion to CCP (Chinese Communist Party) virus relief earlier this year and hope to spend approximately $4.7 trillion more in their infrastructure and budget package.

A showdown with Republicans unhappy with this level of spending has been brewing.

In early August, Senate Republicans led by Sen. Ron Johnson (R-Wis.) prepared a new strategy that would force congressional Democrats to take the brunt of the blame for increasing the limit. Forty-six out of the Senate’s 50 Republicans vowed in a petition created by Johnson that they would not vote for an increase to the debt ceiling.

In the petition, these 46 Republicans explained their reasoning. Johnson wrote that “Since taking control of the United States federal government … Democrats have embarked on a massive and unprecedented deficit spending spree.”

It continued, “Senate Democrats shamelessly estimate their tax and spending plan will result in a $45 trillion debt level by 2031.” Currently, U.S. national debt is approaching $28 trillion; This plan would result in an $11 trillion debt increase over the next decade, bringing the level to over twice the nation’s 2019 GDP.

Johnson continued, “In order for this spending to occur, our nation’s debt limit will have to be increased significantly.”

Johnson agreed with the Treasury Secretary, emphasizing “We should not default on our debts under any circumstances.” He contended that Democrats have the power to raise the debt ceiling with their simple majority via the reconciliation process, a parliamentary procedure that allows certain types of spending and revenue bills to get through the Senate without the risk of being killed by a filibuster. Democrats “have the power to … unilaterally raise the debt ceiling, and they should not be allowed to pretend otherwise.”

The letter concludes: “We, the undersigned Republican Senators, are letting Senate Democrats and the American public know that we will not vote to increase the debt ceiling, whether that increase comes through a stand-alone bill, a continuing resolution, or any other vehicle. This is a problem created by Democratic spending. Democrats will have to accept sole responsibility for facilitating it.”

The petition was predictably met with immediate backlash and disbelief by Democrat leaders in Congress.

Asked about the letter just before the Senate went on their August recess, Senate Majority Leader Chuck Schumer (D-N.Y.) said simply “I can’t believe Republicans will let the nation default.”

President Joe Biden also felt that the effort should be disregarded. When asked whether he was worried about the situation, the president said: “Nope. They’re not going to let us default. $8 billion—$8 trillion of that is on the Republican’s watch.”

White House press secretary Jen Psaki noted the same day: “Raising the debt limit has been done 80 times … in a bipartisan fashion. Ninety-nine percent of [the debt] existed before President Biden took office.” She added that Republicans would also face pressure from “former leaders from both sides of the aisle [who] are eager to see Congress raise the debt limit and not face default.”

The clock is ticking for Congress to avert a default—though the Treasury has resorted to “extraordinary measures” to continue to fund U.S. obligations, Yellen has said that the federal government will run out of money entirely by October without the go-ahead from Congress to issue new bonds.

In view of this fast-approaching deadline, Pelosi today discussed some options for advancing the debt ceiling increase.

Lawmakers have “several options” in the coming weeks, Pelosi said Tuesday morning. She did not commit to attaching the ceiling increase to the budget resolution or infrastructure bill, but she implied that this is a live possibility.

Pelosi said, “We’d like to do it in a bipartisan way … we don’t ever want to put the full faith and credit [of the United States] in doubt.”

Such a bipartisan solution is unlikely, however. After the letter was released publicly, several prominent Senate Republicans weighed in on the situation.

In an interview with Punchbowl News, Senate Minority Leader Mitch McConnell (R-Ky.) said, “I can’t imagine a single Republican in this environment that we’re in now—this free-for-all for taxes and spending—[will] vote to raise the debt limit.”

In an interview with Fox Business, Sen. Rick Scott (R-Fla.) said that a caucus of Republican senators agreed that they “would not raise the debt ceiling without structural change.” Scott explained that as part of this “structural change” the government, like “every family in this country, must learn to live within [its] means.”

For these Republicans, opposing this increase is both an ideological and political win, as it forces Democrats to take the entire blame for raising the limit.