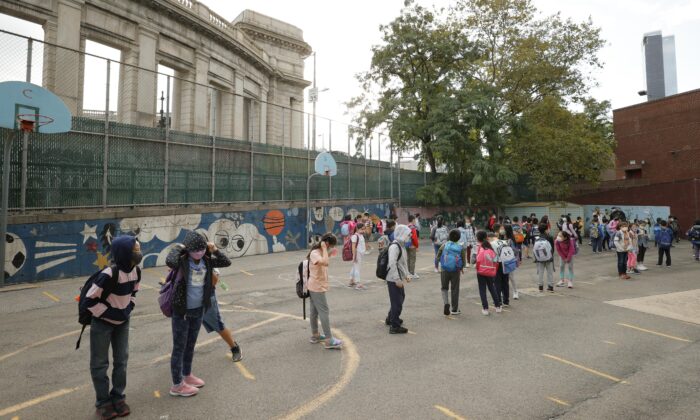 A group of New York parents and two local legislators are suing to overturn the state’s requirement for school children to wear masks.

They allege the mandate was issued illegally and wouldn’t stand up to scrutiny if the state tried to pass it through the correct procedures.

They’re asking the court to toss the mandate as “arbitrary and capricious.”

State Sen. George Borrello (R-Sunset Bay), one of the plaintiffs, said he’s hearing the majority of his constituents in the Niagara Falls area are against masking children. His gripe, however, is mainly with what he sees as the usurpation of power by the governor.

“My focus is on what I believe is the unconstitutional overreach of the executive,” he told The Epoch Times.

Since the onset of the pandemic, he said he’s seen the legislature be all too willing to abdicate its responsibilities and hand over near-absolute mandate to the administration.

“I’m not against children wearing masks in school. I’m not even necessarily against mandates in certain circumstances,” he said. “But to circumvent the laws and just absolutely shred the separation of powers in your state is a scary situation.”

The office of Gov. Kathy Hochul didn’t respond to a request for comment. A spokeswoman for the state’s Department of Health (DOH) told The Epoch Times via email that the agency doesn’t comment on pending litigation.

The mandate was announced by Hochul on Aug. 24, the day she assumed office after the resignation of Gov. Andrew Cuomo. The DOH promulgated it three days later, saying school children and staff, from prekindergarten to 12th grade, have to wear masks at all times regardless of vaccination to prevent the spread of the COVID-19 disease. The rule is based on recommendations by the Centers for Disease Control and Prevention.

The rule was issued under emergency powers, skipping the usual public comment period.

In such cases, the state law requires the administration to explain why the rule is “necessary for the preservation of the public health, safety or general welfare” and why the regular process would go against “public interest.” The explanation should also include the expected duration of the emergency.

The suit lists several precedents that indicate the state needs to be specific in its justification. It argues the administration was not.

“Department of Health’s Notice of Emergency Adoption is a boilerplate statement composed of a myriad of inaccuracies regarding the present situation in New York as it relates to COVID-19,” it states.

The suit goes on to allege the state didn’t go into details because it would have revealed the lack of a proper justification.

The rule notice says that since the emergence of the CCP (Chinese Communist Party) virus, which causes COVID-19, New York has “become the national epicenter of the outbreak.” But the state hasn’t been the epicenter for over a year now, the lawsuit says.

The notice mentions the disaster emergency declared by the previous governor, Andrew Cuomo. But that one expired in June and the new governor, Kathy Hochul, hasn’t declared a new one.

The notice does mention that the current dominant variant of the virus is “twice as transmissible” and that detected infections had increased tenfold in the state. But two “conclusory sentences regarding the Delta variant are not specific reasons that would satisfy the issuance of an emergency regulation impacting millions of children in the State of New York,” the suit argues.

The suit goes further by claiming the DOH doesn’t have the authority to issue the rule to begin with.

“DOH has, as an administrative agency, the authority to fill in the gaps of broad legislation describing the overall policies to be implemented. It does not, however, have the authority to write legislation on a clean slate, creating its own comprehensive set of rules without the benefit of legislative guidance,” it says.

The suit also cites articles by several experts, including the opinions of two doctors and a neuropsychologist all opposing mask mandates for children. They said children do not face a significant risk from the virus and rarely spread it to others, based on their reading of the scientific literature on the subject. Masking, on the other hand, has a significant negative impact on children, they say, preventing children from reading lip movement and facial expressions, a crucial aspect of child’s development, and may have some negative health effects too.

The case is to be heard by Albany County Supreme Court Justice Christina Ryba on Oct. 8.