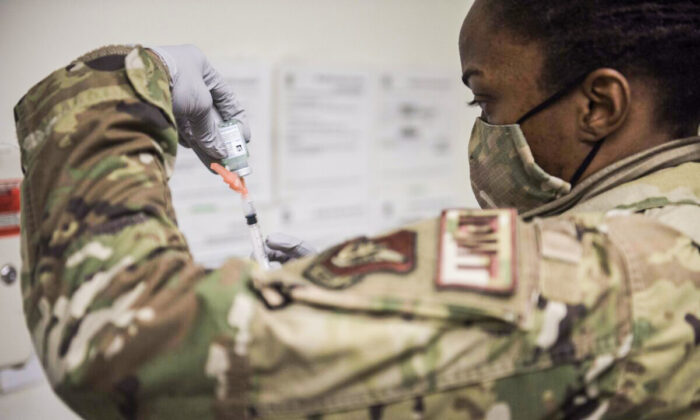 Over 12,000 active-duty Air Force personnel are poised not meet an upcoming deadline to be fully vaccinated against the virus that causes COVID-19, according to newly released data from the military branch.

In a new update on compliance with the Air Force’s COVID-19 vaccine mandate, officials said 3.8 percent of the force remains unvaccinated as of Oct. 18.

That amounts to approximately 12,100 active-duty personnel, down from 13,055 the week prior, according to an Epoch Times analysis of Air Force data.

Fully vaccinated means an airman must get the second dose of the Pfizer or Moderna jab, or the single-shot Johnson & Johnson vaccine, no later than two weeks before the Nov. 2 mandate deadline.

The mandate details were announced by Air Force Secretary Frank Kendall on Sept. 3 under the direction of Defense Secretary Lloyd Austin.

Since then, the vast majority of the force has gotten at least one shot of a vaccine.

But that leaves over 12,000 unvaccinated and at risk of being discharged for noncompliance with the order if they don’t secure a religious or medical exemption.

The Air Force has declined to say whether any exemptions have yet been granted, though a spokeswoman told The Epoch Times via email that they do have the option to apply.

Kendall on Wednesday cheered the number of airmen who have gotten a vaccine.

“Thank you to the hundreds of thousands of total force Airmen and Guardians who are fully vaccinated or on track to meet the Department’s vaccination timelines,” he said in a statement. “To those yet to get vaccinated, the order is clear: You have a responsibility to take action now, protect our nation and those we love, or be held accountable for failing to do so.”

The Air Force told The Epoch Times in an email that it will not delay the deadline.

The military branch has already discharged nearly 40 Air Force trainees who refused to get vaccinated against the CCP (Chinese Communist Party) virus, which causes COVID-19.

Reserves in the Navy and Marines have a Dec. 28 deadline, while Army reserves were given until June 30, 2022.

The bulk of the hundreds of thousands of unvaccinated troops were among the Army, according to an Epoch Times review.

Sen. Jim Inhofe (R-Okla.), the top Republican on the Senate Armed Services Committee, called this week for Austin to suspend the mandate, alleging its enforcement would possibly lead to “irrevocable damage to our national security.”

The Pentagon, though, told The Epoch Times there are no plans to suspend the mandate.