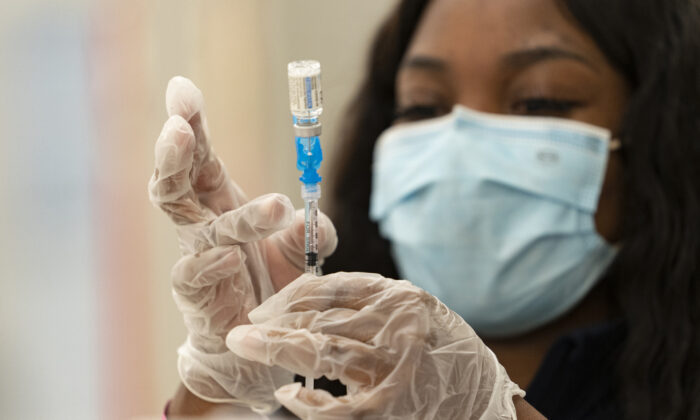 A health worker loads syringes with the vaccine on the first day of the Johnson & Johnson vaccine being made available to residents at the Baldwin Hills Crenshaw Plaza in Los Angeles, Calif., on March 11, 2021. (Damian Dovarganes/AP Photo)
Vaccines & Safety

The vaccine and testing credentialing arrangement will be rolled out sometime in April, Orange County Health Care Agency officials said on Twitter.

“The Digital Passport enables individuals to participate safely and with peace of mind in activities that involve interactions with other people, including travel, attractions, conferences/meetings, concerts, sports, school and more,” officials added.

While details are scant about how the digital vaccine passport would work, the Orange County health agency’s director and health officer, Dr. Clayton Chau, told the O.C. Register that the county’s existing Othena vaccine scheduling app could be modified to include a credentialing feature.

The Othena app is being used to schedule vaccine appointments at the county’s mass inoculation sites, including at Disneyland.

Chau also told the outlet that printed cards could be issued for use by people who don’t use smartphones.

California Public Health Officer Dr. Tomás Aragón said last week that there are currently no plans to create a state-level vaccination passport system, although health officials are looking into formulating standards and guidelines around the use of such credentials, KTLA reported.

Aragón said that if federal authorities “don’t move fast enough” with developing such guidelines, “we will come up with technical standards that will be expected—really focusing on making sure that privacy is protected and that equity is protected.”

It comes amid controversy over vaccine passport-style systems, which have been proposed in some countries, and as some U.S. states and regions have either considered their adoption or moved forward with their deployment.

Hawaii Gov. David Ige’s latest emergency proclamation includes a plan for vaccine passports that would allow travelers to avoid quarantine and COVID-19 testing. While there is no timeline for its adoption and it still needs approval by the director of the Hawaii Emergency Management Agency, Lt. Gov. Josh Green told Hawaii News Now that the plan is to launch a pilot for inter-island travel by May 1.

New York state has also rolled out its “Excelsior Pass” system that would require people to show that they have been vaccinated when trying to enter certain events and locations.

Vaccine passports have been criticized by civil liberties groups, who say they would potentially violate Americans’ privacy rights while denying key services to people who are not vaccinated.

The Biden administration has said that it would not develop a federal vaccine passport system, but that it would come up with guidelines around their use and leave development to the private sector and local authorities.

“The government is not now, nor will we be supporting a system that requires Americans to carry a credential. There will be no federal vaccinations database and no federal mandate requiring everyone to obtain a single vaccination credential,” White House press secretary Jen Psaki told reporters at the White House last week.

“Our interest is very simple from the federal government, which is Americans’ privacy and rights should be protected so that these systems are not used against people unfairly,” Psaki clarified Tuesday. She again said the government would provide guidance on privacy concerns related to vaccines.

Rep. Andy Biggs (R-Ariz.) has also introduced legislation that would ban federal agencies from future issuance of any standardized documentation that could be used to certify COVID-19 vaccination status to third parties, like airlines or restaurants.

Biggs’s proposed bill, called the No Vaccine Passports Act (pdf), would also prohibit proof of COVID-19 vaccination from being a requirement to access federal or congressional property and services, Biggs’s office said in a statement.

“My private health care decisions—and yours—are nobody else’s business,” Biggs said. “Vaccine passports will not help our nation recover from COVID-19, instead, they will simply impose more Big Brother surveillance on our society.”