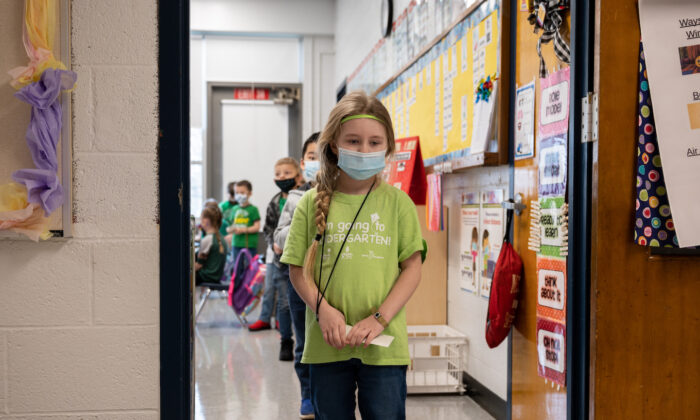 The Oklahoma House has passed a bill banning mask mandates in public schools and requirements for students to be vaccinated against COVID-19.

“For the sake of children throughout the state, I’m glad this bill is one step closer to becoming law,” Republican state Sen. Rob Standridge said in a statement. “With this legislation, vaccine passports for Oklahoma students will not exist.”

Standridge is also one of the authors of the bill.

SB 658 (pdf) would prohibit the boards of education of all public school districts and technology center school districts—including those of higher education—from requiring vaccination against COVID-19 as “a condition of admittance to or attendance of the school or institution.” It would also prevent vaccine passports or similar documentation from being required.

Standridge explained during the session that the COVID-19 vaccine is different from other vaccines that are currently required, like those against diphtheria or tetanus, because it’s “still under emergency use authorization,” News9 reported.

Exceptions include when the governor declares an emergency or after the boards of education consult with their local county health department, but the mask mandate must be reconsidered at each regularly scheduled board meeting.

“This legislation creates a barrier to local control that prevents locally elected school boards from being able to fully protect their students as they and their constituents see fit,” state Rep. Andy Fugate stated in a news release. “This is a clear government overreach meant to strip away the personal freedom of Oklahomans wanting to protect their communities.”

Republican state Rep. Kevin West, who is also an author of the bill, said: “Should the force of government be used to force citizens to do something they don’t want to do, or should it be used to empower the rights of citizens?

“This protects a student’s and a parent’s right to choose for themselves whether a vaccination is appropriate for them for their own personal health reasons or their religious or personal beliefs. This disallows discrimination against students and parents that choose to be exempt from such vaccinations.”

SB 658 will take effect on July 1 if Stitt signs it into law.

Republicans have the supermajority necessary in both chambers to override a veto by the governor.