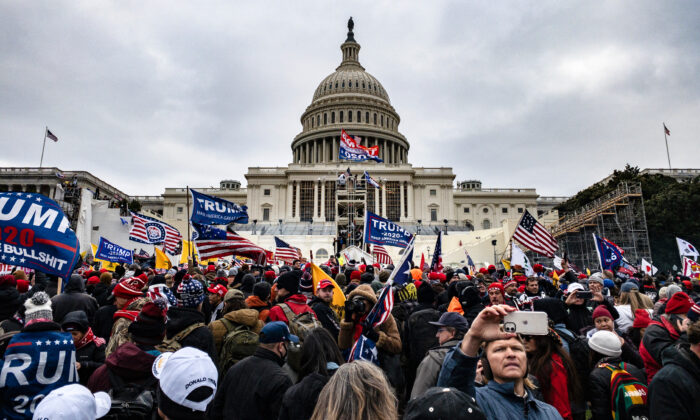 Occam’s Razor and My Hunch About Jan. 6

On Jan. 6, 2021, I was driving back from Atlanta to Nashville, an unpleasant journey that entails negotiating the perpetually under construction Chattanooga highway system, a real-life version of Dante’s Ninth Circle.

The previous night I had attended the gloomy “victory” party for the failed GOP Georgia senatorial candidates, so I wasn’t in the greatest of moods when I heard the news from Washington over satellite radio.

Invading the Capitol? What was the point of that, I thought.

Okay, demonstrate, but of what possible use to Trump and his supporters was it to march en masse into the so-called People’s House? It would only be used against them in their quest to delay the certification of the election, a tenuous hope at best. (I had little faith in Pence then and less now.)

And now they were reporting violent confrontations and destruction of government property. What was going on? It didn’t make sense.

I thought of the well over a dozen Trump rallies I had covered across the country for PJ Media in 2016 and The Epoch Times in 2020.

With the exception of once in Anaheim when a handful of Latinos jumped on some cars in a relatively brief immigration protest and the occasional leftwing heckler or two that had to be escorted out, they had been remarkably peaceful events—especially with audiences in the tens of thousands.

Yes, I had seen the Proud Boys at a couple of events and they looked ready to rumble to some degree—or at least ready for someone to prod them into rumbling. And that was the point. (Apropos, The Epoch Times is now reporting a whistleblower is outing the Seattle Police for lying about the Proud Boys violent intentions back in 2020.)

Still, someone was instigating this. A sea change had taken place. Some group or some people had encouraged an inherently non-violent movement—I was always amazed at the rallies how polite the “deplorables” were—to cross the line.

I immediately thought the obvious—Antifa.

Who had not seen their myriad violent explosions in Portland and elsewhere? Who didn’t find it inexplicable that the government, state and federal, almost never did anything about them when they actually torched buildings and beat up people in the streets?

In fact, I had seen them personally in D.C. not that long before—a sociopathic bunch, whizzing around on skateboards, hopped up on something and eager to play games straight out of “Clockwork Orange.”

For a while, I was sure they were behind it. I imagine a lot of others did too, possibly including President Trump. That may have accounted for his delay in speaking on the matter that he has been accused of. He was waiting for Antifa to be caught.

But something nagged at me. The so-called anarchists didn’t seem capable of instigating anything as large as what I was hearing was transpiring. (As I learned later, they were present under a false flag, but to a still indeterminate extent.)

Then I had a second thought that blended what I learned in my own leftwing past—increasingly distant, decades now, though it was—with what was going on in the present, specifically by the evident, even then, outrageous behavior and bias of the FBI.

I remembered how, back in the seventies, they seemed to be involved in everything. The joke was that every lefty organization was at least half FBI agents. I didn’t know if that was an exaggeration. Actually, I wasn’t much for organizations, then and now, and didn’t like being a member. But I suspected it was close to the truth.

So I came to a conclusion as I headed close to Nashville that was an early, mostly instinctual version of what has been alleged recently in far more detail—with evidence on offer—by Revolver.News.

The real false flag most likely belonged to the FBI. They were the McGuffin I was looking for.

I don’t mean to brag about this. I don’t think it was a particularly brilliant insight. It was, frankly, Occam’s Razor—the most obvious is true. Nothing else added up.

Moreover, I didn’t do anything about it. It was only a hunch and I had no evidence. I probably should have gone further, but life went on, and I put it away as the fantasy of a onetime detective writer who hadn’t written a mystery in years.

But when I read a few weeks ago on Revolver about these various characters—Ray Epps, FenceCutter Bulwark, the Scaffold Commander and so forth—and saw the many videos and photographs offered as evidence by their lead writer Darren Beattie of FBI intervention, my mouth dropped open. The blanks in my own fantasy were being filled in.

Did I know what he had written was a hundred percent true? I had no way of knowing but it made sense and I am in no way a conspiracy theorist. (I believe Oswald acted alone from the Texas Schoolbook Depository—at least for now.)

If what Beattie says can be proven, if those people can be found and admit their identities—Epps may be forced to—it will make a mockery of the nauseating absurdities from Joe Biden and Kamala Harris (Jan. 6 is another 9/11 or Pearl Harbor?) we all had to listen to on the anniversary of the “insurrection.”

What I find fascinating in all this is that our friends in the MSM have taken no interest whatsoever in this,—although it would seem relatively easy for larger organizations to follow up—other than branding the whole thing with their favorite word—“debunked.”

I can’t say I’m surprised. What would they get out of it? You don’t win a Pulitzer these days for telling the truth.

LASTLY: Many liberal and progressive commentators are using Jan. 6 as another excuse to call for the “deprogramming” of Trump supporters. I guess that would include me. Do I have to wear a mask?

Fortunately, they now won’t have to worry about Senator Ted Cruz anymore. He just deprogrammed himself.