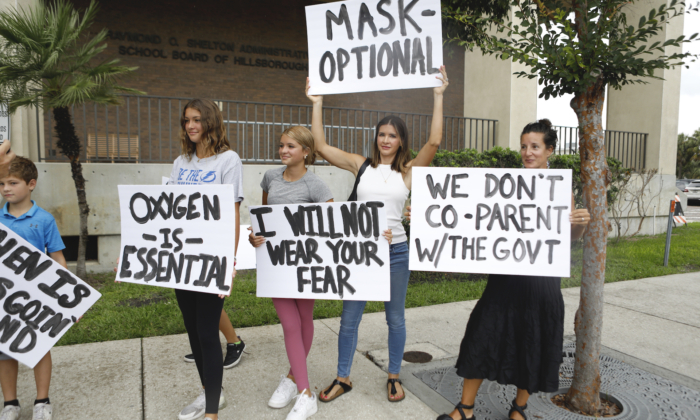 The National School Boards Association (NSBA) has apologized to its members on Friday for a letter that was previously sent to the Biden administration in which the school board group compared parents accused of trying to intimidate educators to domestic terrorists.

In a memo issued to NSBA members, the board said that “on behalf of NSBA, we regret and apologize for the letter,” which was sent on Sept. 29, urging President Joe Biden to take action to stop what it described as “threats and acts of violence” against school boards, teachers, and others involved in the public education sphere.

“There was no justification for some of the language included in the letter,” the NSBA wrote. “We should have had a better process in place to allow for consultation on a communication of this significance. We apologize also for the strain and stress this situation has caused you and your organizations.”

It added that the NSBA deeply values “not only the work of local school boards that make important contributions within our communities, but also the voices of parents, who should and must continue to be heard when it comes to decisions about their children’s education, health, and safety.”

The memo comes as school board organizations in at least 20 states distanced themselves from the NSBA, citing disagreement over the way it has characterized concerned parents. Some have quit or moved to leave the NSBA.

The NSBA’s initial controversial Sept. 29 letter (pdf) claimed that some clashes between school board members and parents over issues such as masking policies, the critical race theory, among others, should be equivalent to parents engaging in “a form of domestic terrorism.”

“As these acts of malice, violence, and threats against public school officials have increased, the classification of these heinous actions could be the equivalent to a form of domestic terrorism and hate crimes,” the organization wrote.

Emails (pdf) obtained by Parents Defending Education last week disclosed that the NSBA was in touch with the White House and others in the administration before the release of the letter.

“In talks over the last several weeks with White House staff, they requested additional information on some of the specific threats,” Chip Slaven, the NSBA’s interim executive director and CEO, wrote in an email to NSBA board members just hours after the letter was released to the public.

Most of the incidents the board included related to parents vigorously pushing back on controversial teachings or material and not incidents where any laws appeared to be broken.

Several incidents did ultimately lead to arrests at school board meetings, including a father in Loudoun County, Virginia, who was upset his daughter had been raped and school officials allegedly acted to cover it up.

Attorney General Merrick Garland issued a memorandum several days after the NSBA’s letter, ordering federal officials to crack down on parents accused of threatening violence or trying to intimidate educators.

On Oct. 21, Garland denied claims that the U.S. Justice Department would label parents as domestic terrorists, and parents who take issue with school board policies will not be investigated.

“The Justice Department supports and defends the First Amendment right of parents to complain as vociferously as they wish about the education of their children, about the curriculum taught in the schools,” Garland said, the New York Post reported. “That is not what the memorandum is about at all, nor does it use the words ‘domestic terrorism’ or ‘Patriot Act.'”

Jim Green, the executive director of Oregon’s School Boards Association, said in a statement on social media the board appreciates NSBA’s apology over the controversial letter that was issued to the Biden administration.

“We appreciate NSBA’s apology over some of the languages in the organization’s appeal for protecting the safety of school board members,” Green wrote. “That doesn’t mean the underlying issue—keeping volunteer school board members safe from threats and violence—isn’t important. It is.”

“But NSBA recognized that the wording it used alienated many parents, our vital partners in public schools. It’s my hope with this apology that the national organization can learn from the experience and move on.”