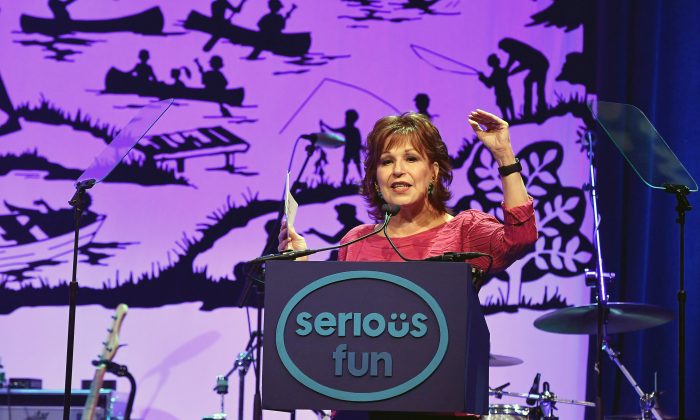 I never watch “The View”—life is too short—except when it is thrust upon me by a supposedly controversial clip on cable news.

One of those occasions arose the other day when their old standby Joy Behar made what she later called an “inappropriate” joke about Las Vegas Raiders defensive end Carl Nassib, who had just become the first active player in NFL history to come out as gay.

The liberal women on the show chortled away at the alleged witticism only to be caught up short by Meghan McCain—the woman carefully chosen for the “conservative” slot on the program—who registered extreme disapproval. The usual leftwing suspects rushed to downplay the incident, but nevertheless, it went viral.

If you haven’t yet heard the joke, played endlessly elsewhere, I’ll be discreet and leave it to this link. (Warning: It’s not a very good one. Richard Pryor and Joan Rivers are dead.)

But this is not about Ms. Behar—one of those mediocrities who for mysterious reasons ends up making millions on television.

Something more important is being revealed by this, to use the colloquial term, “Freudian slip.” (Actually, this kind of “accidental” revelation way predates Freud and is really just common sense. Aristophanes was no doubt aware of such things and probably many before him.)

Behind the joke, and the immediate positive response from the loyal liberal ladies on hand, is something I have observed, and have been yearning to say, for some time:

The left is considerably more bigoted than the right in matters of both race and sex.

Others have called this projection—and that’s true—but it is more than that.

So much of what the left does and how they act is built around hiding their own bigotry, the espousal of Critical Race Theory—an idea that pretends to social justice but is actually totalitarian in practice—just being one very contemporary example. (Yes, CRT is bad for whites, but it’s even worse, ultimately, for blacks.)

I realize statistical verification of my assertion is not easy to obtain. Such things are difficult to quantify, even by sociologists whose profession was invented by leftists and therefore open to questions of bias. As with many things, we are left with our guts to figure this out and draw our own conclusions.

So, I will make a second assertion here that—at least in this one area—the peculiar circumstances of my life qualify me to say more about this than the average person.

I am one of the few people to have been on both sides of our political equation, for decades each, often in quasi-leadership positions, or, as I sometimes quip, I am the only person I know of to have been profiled favorably by both Mother Jones and The National Review. (I’m not sure I’m happy with either at the moment.)

When I was younger, besides being in the civil rights movement and doing the usual demonstrating in grad school and after, I was on the board of directors of the Writers Guild of America (liberal/left then, now über-woke), president of the west coast branch of PEN (also left but supportive of free speech) and North American president of the International Association of Crime Writers (heavily infiltrated by the KGB). You get the picture.

All this time I was privately drifting away from the left but reluctant to go public, worried it would negatively affect my Hollywood screenwriting career (it did), not to mention alienate friends and family. Cowardly? Yes.

But then Sept. 11 happened and I made the break, forever. I couldn’t do otherwise.

Meanwhile, through all that time on the left, I would hear the usual casual racial and sexual wisecracks and slurs, many worse than Behar’s. Although I cringed, I assumed it was the way of the world and feared that, when I went over to the right, victim of the propaganda around me that I was, it would be even uglier.

Boy, was I wrong.

By 2005 or so I had become the co-founder of PJ Media (then Pajamas Media) and spent the years through 2013 as CEO of that company, meeting hundreds of right-wingers of all stripes, conservatives and libertarians, all races and creeds, gay and straight, senators and bloggers, that came through our office.

Not one, not a single one I can recall, made even one slur remotely of the type Behar did.

A number opposed gay marriage on religious grounds (I don’t) but never said a negative word about gays or joked about them.

That was about the size of it and has been in the years since when I have been all over the country covering conservative causes and events, often in large crowds of so-called “Deplorables,” who are almost invariably super nice.

Of course, there must be exceptions—it’s a huge country with hundreds of millions of people—but I haven’t seen them.

I imagine newly-lionized author Ibram X. Kendi would say I am missing the point. None of the people I knew or know now were or are actively, in his parlance, “anti-racist.”

To which I say: Thank God for that!