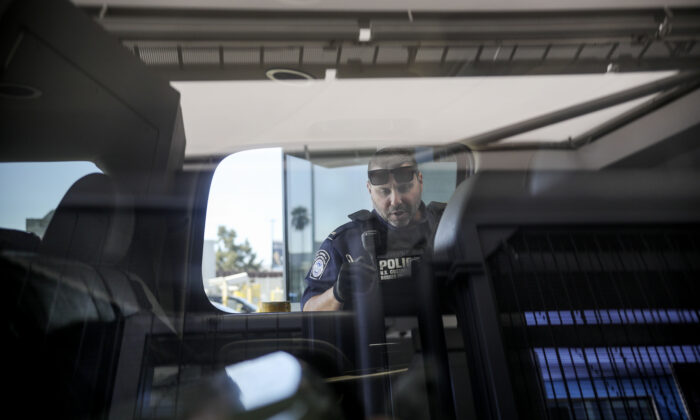 An Immigration and Customs Enforcement (ICE) agent checks an automobile at the U.S.-Mexico border. (File Photo/Sandy Huffaker/AFP via Getty Images)
US News

New DHS Guidelines: Being in US Illegally Not Reason Enough to Arrest Someone

New guidelines promulgated by a top Biden administration official on Thursday advise immigration enforcement agents that being in the country illegally is not by itself enough reason to arrest somebody.

More than 11 million illegal immigrants are estimated to be in the United States, but Department of Homeland Security (DHS) does not have the resources to arrest and seek to remove all of them, Homeland Security Secretary Alejandro Mayorkas said in a memorandum laying out the guidelines. He urged agents with Immigration and Customs Enforcement (ICE), an office inside DHS, to exercise “discretion” in enforcing immigration rules.

“The fact an individual is a removable noncitizen therefore should not alone be the basis of an enforcement action against them,” he wrote.

“We will use our discretion and focus our enforcement resources in a more targeted way. Justice and our country’s well-being require it,” he added.

Triggers include a noncitizen committing certain crimes or having a serious prior criminal record; being engaged or suspected of terrorism or espionage; or being apprehended while trying to illegally enter the United States at the border.

Being in the country without a green card or other legitimatization documents means a person can be removed under U.S. law. The new guidelines mean the administration is acknowledging that it won’t enforce the law, critics immediately charged.

“The person who swore an oath to uphold immigration law *as written by Congress* has declared that immigration law will be upheld according only to his diktats,” NumbersUSA, which advocates for lower immigration levels as a way to “allow present and future generations of Americans to enjoy a stabilizing U.S. population,” wrote in a social media post.

The guidance comes as the United States under President Joe Biden sees record-setting levels of illegal immigration. Some experts believe a new fiscal year record will likely be set when the numbers for September come in and are almost certain that at the current pace of border crossings—which rose during the hot summer months instead of following the typical trendline—the yearly record will be eclipsed.

Biden upon taking office halted construction of the border wall, stopped the Trump era “Remain in Mexico” program, and curtailed use of emergency pandemic powers to expel illegal immigrants. The policies have served to entice illegal immigration, according to experts, immigrants, and members of Congress from both parties.

“The Biden administration has welcomed the flood of illegal aliens crossing our border and is now promising those same illegal aliens that they may stay in the U.S. without repercussions,” he said on Twitter.

Mayorkas, nominated to his post by Biden and approved by the Senate, sees it differently.

He said in a statement that the guidelines will “require an assessment of the individual and take into account the totality of the facts and circumstances.”

“In exercising this discretion, we are guided by the knowledge that there are individuals in our country who have been here for generations and contributed to our country’s well-being, including those who have been on the frontline in the battle against COVID, lead congregations of faith, and teach our children. As we strive to provide them with a path to status, we will not work in conflict by spending resources seeking to remove those who do not pose a threat and, in fact, make our nation stronger,” he added.

The guidelines are poised to take effect on Nov. 29.

But they’re likely to face legal challenges. The enforcement priorities they’re replacing, which were issued by ICE’s acting director, Tae Johnson, in February, were blocked in August by a federal judge.

Johnson attempted to direct agents not to focus on detaining and removing certain illegal immigrants. But U.S. District Judge Drew Tipton, a Trump nominee, found that the Executive Branch was, through Johnson’s memo, trying to “enforce a law enacted by Congress in a way that is contrary to the plain language of the law.”

An appeals court panel, though, earlier this month largely overturned the decision.

A separate challenge over the February memo was filed over the summer by ICE agents and sheriffs. That case has not been decided yet by a federal district court in Texas.

Other lawsuits have been lodged against other aspects of the administration’s immigration policies, including its widespread release of illegal immigrants into the U.S. interior, including one filed by Florida this week.