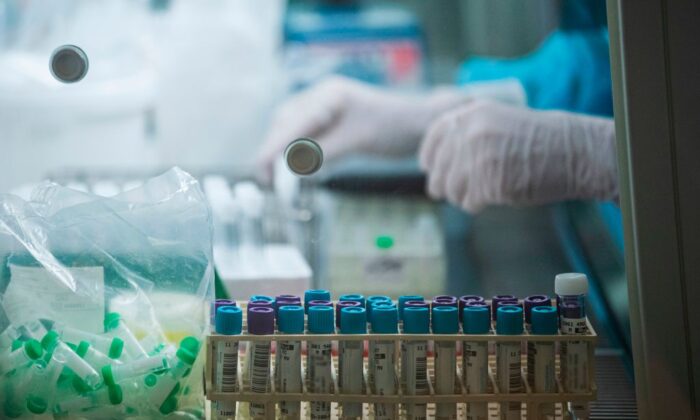 A medical staffer prepares and processes PCR and antibody tests of people who think they may be infected with COVID-19, at the laboratory of Karolinska Hospital in Solna near Stockholm, on Dec. 7, 2020. (Jonathan Nackstrand/AFP via Getty Images)
PUBLIC HEALTH INFORMATION

Most Recovered COVID-19 Patients Have Broad, Robust Immunity That Likely Provides Some Protection Against Variants: Study

Most people who have recovered from COVID-19, even with mild illness, retain a broad and durable immunity to the disease, including some degree of protection against its variants, according to an Emory University study published in the journal Cell Reports Medicine.

The longitudinal study, the most comprehensive of its kind to date, involved 254 COVID-19 patients between the ages of 18 and 82 years who provided blood samples at various points for a period of over eight months beginning in April 2020. About 71 percent of the patients had mild disease, 24 percent experienced moderate illness, and 5 percent had severe disease.

The researchers found that most of the patients who recovered mounted a strong and wide-ranging immune response to the CCP (Chinese Communist Party) virus for at least the 250-day duration of the study.

“We saw that antibody responses, especially IgG antibodies, were not only durable in the vast majority of patients but decayed at a slower rate than previously estimated, which suggests that patients are generating longer-lived plasma cells that can neutralize the SARS-CoV-2 spike protein,” Rafi Ahmed, director at Emory Vaccine Center and lead author, told Emory News Center on July 22.

SARS-CoV-2 is the scientific name of the CCP virus, which causes the disease COVID-19.

The authors stated that natural immunity after recovery from the disease offered some degree of protection against variants as research suggests that COVID-19 vaccines may be less effective against them.

“The immune response to natural infection is likely to provide some degree of protective immunity even against SARS-CoV-2 variants because the CD4+ and CD8+ T cell epitopes will likely be conserved,” the authors wrote.

The Centers for Disease Control and Prevention (CDC) says it’s monitoring multiple variants, but only four are of concern since they “seem to spread more easily and quickly than other variants.” While experts say variants may be more transmissible, that doesn’t necessarily translate to more severe disease or fatalities.

The Indian or Delta variant currently accounts for more than 80 percent of all new sequenced cases in the United States. Scientists say more research is still needed to confirm whether infection with this variant is associated with more severe disease, hospitalization, and death.

The other three variants of concern, named according to where they were first identified, are the United Kingdom variant, the South African variant, and the Brazilian variant.

“These data are most consistent with the generation of long-lived plasma cells and refute the current notion that these antibody responses to human coronaviruses are short lived,” the researchers stated. “Moreover, the COVID-19 patients mounted increased IgG antibody responses to SARS-CoV-1, a related pathogen that none likely had experienced previous exposure to.”

The researchers will continue to follow the cohort for several years, with the last sample collection of the participants set for February 2023. Doing so allows the researchers to gather more data to “define the progression to long-lived immunity” to the CCP virus after natural infection.

The findings add to the growing body of research that indicates that recovered COVID-19 patients develop long-lasting immunity.

A limitation of the study is that it didn’t include more severe COVID-19 patients and those who were asymptomatic. However, the authors noted that “mild-moderate illness accounts for [more than] 80 percent of COVID-19 cases, highlighting the relevance of our findings over time.”

The authors said that the study’s findings will “also serve as a benchmark for immune memory induced in humans by SARS-CoV-2 vaccines.”