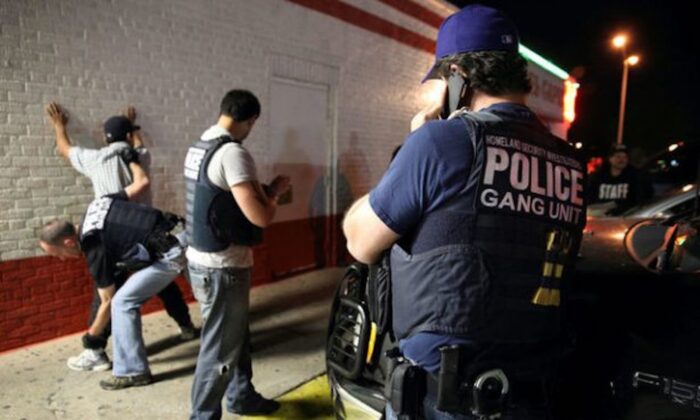 The federal Immigration and Customs Enforcement (ICE) said Monday that it has arrested more than 300 illegal immigrant sex offenders since last month as part of an ongoing operation.

Agents arrested 302 sex offenders since June 4 as part of the agency’s Operation SOAR (Sex Offender Arrest and Removal), according to the agency.

“Our officers have prioritized the arrest of noncitizens who pose the greatest threat to the security and safety of our communities,” acting ICE Director Tae Johnson said in a statement about the arrests.

Johnson said that ICE focused its resources “on those who have committed sex crimes and demonstrated predatory behavior” and reinforces “our steadfast commitment to enhancing public safety across the United States.”

ICE, a sub-agency of the Department of Homeland Security, said the illegal immigrant sex offenders are identified, arrested, and then deported.

In another incident, Border Patrol officials said on Monday that a registered sex offender attempted to sponsor a 16-year-old female illegal immigrant who was trying to cross the U.S.-Mexico border near McAllen, Texas.

During processing, Customs and Border Protection (CBP) agents found an unaccompanied teenager who told them “the name of a male subject who she claimed was a family friend,” according to a statement from the agency in an emailed statement to The Epoch Times.

“By memory, she provided demographic information of her alleged sponsor,” the Border Patrol statement said, “which is rare and raised concern from agents and a CBP officer working virtually in Canada to assist our agents with the overwhelming number of migrants at the Donna Processing Facility.”

Agents then made contact with a male California resident, the statement added. He told them that he was a friend of the girl’s close family friend.

But because of “inconsistencies in the subject’s stories,” Border Patrol agents became suspicious of his claims.

“Upon further investigation, agents discovered the subject is a registered sex offender out of Oroville, California,” the statement continued.

Rio Grande Valley Sector “agents are tirelessly working to ensure unaccompanied children are not harmed and sent with individuals in our communities who seek to prey on children,” said Chief Brian Hastings, the sector’s chief, in the statement. “Due to the diligence of the CBP officer and agents, the unaccompanied female juvenile is safe, and all proper authorities have been notified.”