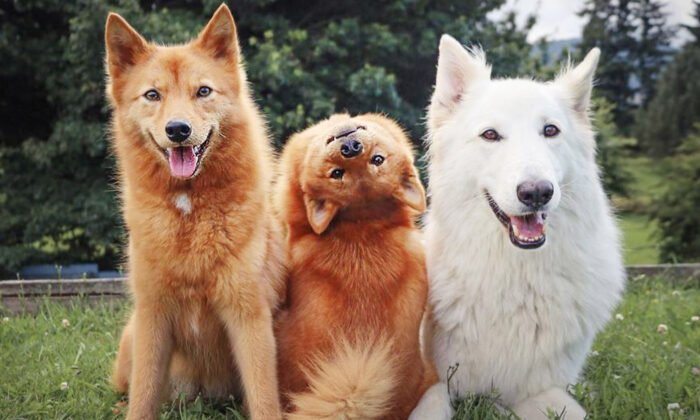 (Courtesy of Kaya The Shepherd)
Animals

To many a parent’s dismay, not every kid takes family photographs as seriously as they should, while some more mischievous ones go out of their way to make silly faces whenever a camera goes off.

But one dog in New Zealand has taken silly photographs to a whole new level.

Kiko, a ginger Finnish spitz, has caught the internet’s attention with a ridiculous pose she seemingly insists on making whenever her owner takes a picture.

As you can see, first. she turns her back on the photographer, as if rebelling, and then bends over backward to look at the camera upside-down, like some kind of canine contortionist. Bizarre, right?

The dog’s owner, Ashleigh Macpherson, told Bored Panda that she trained all her dogs to sit still and pose for the camera. Kiko sits with the other dogs, but since she’s still a young puppy, she doesn’t quite obey.

“Kiko was a Covid puppy and was raised during the lockdown,” Ashleigh told the outlet. “She was a singleton puppy who had no littermates. So her company that she grew up with was the cats. Maybe that’s why she’s such a weird character.”

Oh, there was one good one, at least.

Now, the white dog in the photograph is Kaya, a 6-year-old white Swiss shepherd. The other dogs are Tofu, Kiko’s 1.5-year-old biological sister, and Mika, their 3-year-old mother.

“They are crazy little dogs who are sassy and very cat-like,” the proud owner and dog mom said. “They are very talkative and have so much to say. They are small dogs with huge personalities.”

By far the silliest of those personalities is Kiko. She doesn’t reserve her upside-down glances solely for photographs, either. “If she is facing the opposite direction, she will automatically want to turn her head and look at me,” Ashleigh said. “It’s her own little trick.”

In fact, Kiko does her “little trick” so often, Ashleigh revealed to Unilad, that she has turned it into an actual trick that can be performed for amusement on command.

Reminiscent of the possessed main character in “The Exorcist,” now when Ashleigh gives the command “demon!” Kiko does the pose automatically.

A post shared by Kaya & Ashleigh the human (@kayatheshepherd)

“Maybe she loves looking at the world upside down,” Ashleigh speculated.

But one thing’s for sure: The internet is loving looking at Kiko looking back at us in her topsy-turvy way.

“Oh this is too cute and so fabulous,” one netizen commented on a picture of Kiko on Instagram.

“Omg these are GREAT,” said another.