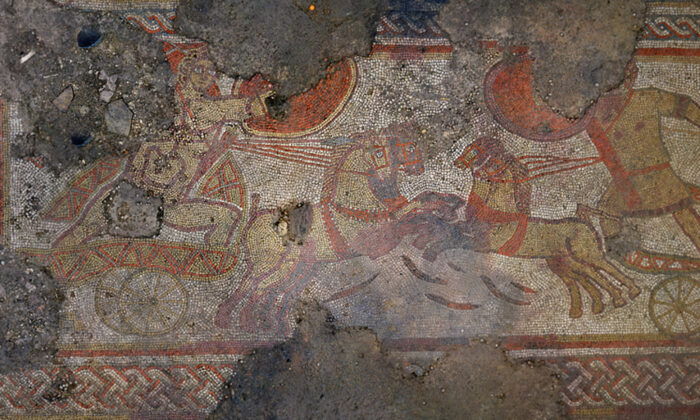 On his father’s farm in Rutland, Jim Irving and his family were out walking when he spotted a few bits of ancient pottery scattered on the ground. Little did he know that further investigation into this would lead to the discovery of an extraordinary 1,700-year-old Roman mosaic, depicting Achilles and the Trojan War from The Iliad, and the remains of an ancient villa.

Upon finding these traces during lockdown in 2020, Irving accessed satellite imagery and discovered a cropmark, and after a preliminary search he contacted the Historic Environment team at Leicestershire County Council, who in turn reached out to the University of Leicester Archaeological Services (ULAS) to excavate the area.

“It was like literally within a couple of weeks before we had people on site to start working this properly,” Irving told the University of Leicestershire. He, too, was able to work along archeologists in the field.

Given the nature of this exceptional find, Historic England secured funding for urgent archeological excavation, which began with a careful clean of the exposed Roman mosaic. “It was a spine-tingling experience as the first figures were revealed, and we quite literally came face to face with the past,” said John Thomas, deputy director of ULAS, in a statement.

The researchers soon uncovered a remarkable Roman mosaic, dating back from the third to fourth century, the first of its kind in the UK, which depicts scenes from the end of the Trojan War as told in Homer’s classic, with several frames illustrating a story sequence, almost like a comic book.

The first of which features the Greek warrior demigod Achilles facing Hector of Troy on the battlefield, both riding chariots led by horses of different colors. In the second frame, Hector, now dead, is being dragged behind Achilles, who rides his chariot and wields a red shield. The third and last scene shows Hector’s body being ransomed to his father, Priam, for his son’s weight in gold; a central figure balances a large scale on his shoulders with gold weighing on one side, Hector’s lifeless corpse on the other.

Additional funding, prompted by the heightened significance of the find, allowed for magnetometry and ground penetrating radar (GPR) surveys, which revealed stunning insights; the Roman villa complex extends far beyond the structure containing the mosaic and comprises an ancient farming community inside an angular enclosure. On Nov. 25, 2021, the rare mosaic and the surrounding villa complex were protected as a Scheduled Monument.

“The villa is also surrounded by a range of other buildings and features revealed by a geophysical survey and archaeological evaluation, including what appear to be aisled barns, circular structures and a possible bath house, all within a series of boundary ditches,” said Thomas.

He believes that the owners of the villa were well educated in the classics of the day and possibly sought to impress visitors. “A Roman villa would have been a high-status farming establishment with its own landscaped estate,” said Thomas. “What we can tell from the style of the mosaic and the high quality of its workmanship is that this is someone who was classically educated, and they wanted to either educate their friends in that way or perhaps more likely show off their knowledge.”

Interestingly, delving into ancient literature has revealed that these scenes from the mosaic are, in fact, an alternate ending to The Iliad. In the original, Achilles refuses to return Hector’s body—not even for his weight in gold—whereas this alternative may be a revamp by the great Athenian playwright Aeschylus, of whose work little survives. The Romans, according to ULAS, would have known of this retelling—even more than 1,700 years ago in rural Rutland.