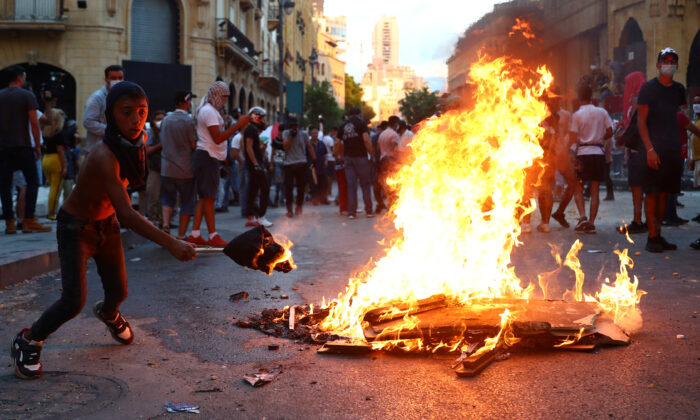 Demonstrators take part in anti-government protests that have been ignited by a massive explosion in Beirut, Lebanon, on Aug. 10, 2020. (Hannah McKay/Reuters)
Middle East

The economy of Lebanon is seeing a once-in-a-lifetime collapse amid hyperinflation and outages, according to a report from the World Bank.

The small Middle Eastern country has seen inconsistent power supply and outages after the massive explosion in its capital, Beirut, last year. The country, which is also dealing with hyperinflation, is seeing one of the worst three economic depressions globally since the mid-1800s, according to the World Bank.

“Lebanon’s GDP plummeted from close to US$55 billion in 2018 to an estimated US$33 billion in 2020, with US$GD/capita falling by around 40 percent,” said the organization in a recent news release accompanying its report (pdf). “Such a brutal and rapid contraction is usually associated with conflicts or wars” although Lebanon has been considered a state prone to conflict and violence, said the report.

“This illustrates the magnitude of the economic depression that the country is enduring, with sadly no clear turning point on the horizon, given the disastrous deliberate policy inaction. The social impact of the crisis, which is already dire, could rapidly become catastrophic; more than half the population is likely below the national poverty line,” according to the report.

An analysis from the Wall Street Journal places at least some of the blame on the massive explosion that rocked Beirut about a year ago in August of last year. In the capital, power outages are commonplace and have forced restaurants, for example, to use portable generators to generate electricity.

The blast killed at least 200 people and triggered as much as $15 billion in damage, according to Beirut’s governor. The government of Lebanon also was forced to resign after widespread pressure from protesters.

“I set out to combat corruption, but I discovered that corruption is bigger than the state,” said Lebanese Prime Minister Hassan Diab widespread resignations. “I declare today the resignation of this government. God bless Lebanon.”

There have also been fights in supermarkets as people try to buy bread, sugar, oil, and other goods before they run out, with inflation 400 percent, the report said. Murder rates and other crimes are also rapidly rising.

The economic collapse could reduce the country into a failed state, experts have warned.

“Not only do we have an absence of government and a political vacuum, but we’re going to have a severe problem with the function of the state of Lebanon,” Lebanese American University political scientist Imad Salamey told The Wall Street Journal. “We are heading toward the unknown.”