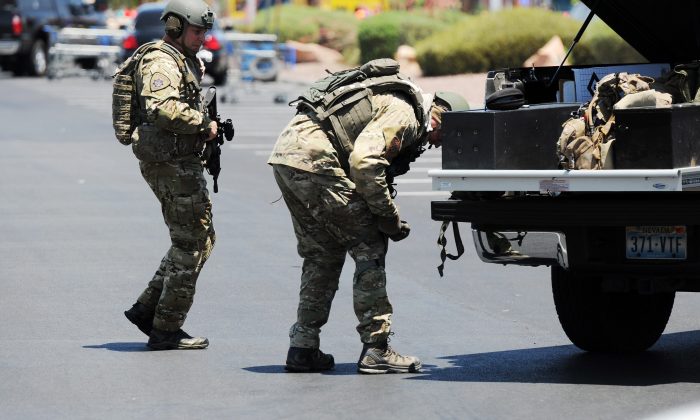 Proof of vaccination is being required for anyone wanting to be hired by the Las Vegas Metropolitan Police Department (LVMPD), with some limited exceptions.

“LVMPD is requiring all new hire employees to be vaccinated and to show proof of vaccination for COVID-19 prior to being hired,” the department’s application page reads.

At the end of the announcement, it states that the department is an “equal opportunity employer.”

“All appointments to the competitive service shall be made without regard to race, color, religion, sex, age, disability, sexual orientation, national origin, genetic information, military service, or political affiliation, and shall be based on merit and fitness only,” the statement reads.

There are some limited exemptions to the vaccine requirement in cases such as health and allergies or religious conflicts, the department told Breitbart.

The Employment Diversity Office will have the religious exemption cases forwarded to them for approval, and the health and allergy cases will be sent to the Health and Safety Section for approval.

“We will approach all requests for accommodations with great care for the individual applicant,” LVMPD told the outlet.

More than half of U.S. states have banned the use of vaccine passports, asserting that they present serious privacy concerns and lead to disparate treatment of the unvaccinated.

George Gresham, president of 1199SEIU United Healthcare Workers East—which describes itself as the largest health care union in the country—said that hospital systems don’t have the right to mandate vaccines for employees.

Florida Gov. Ron DeSantis said in a March 29 press conference that he will take emergency executive action against the concept of Americans needing a vaccine passport to be able to travel domestically and internationally.

Representatives from the Las Vegas Metropolitan Police Department didn’t respond to a request for comment by press time.