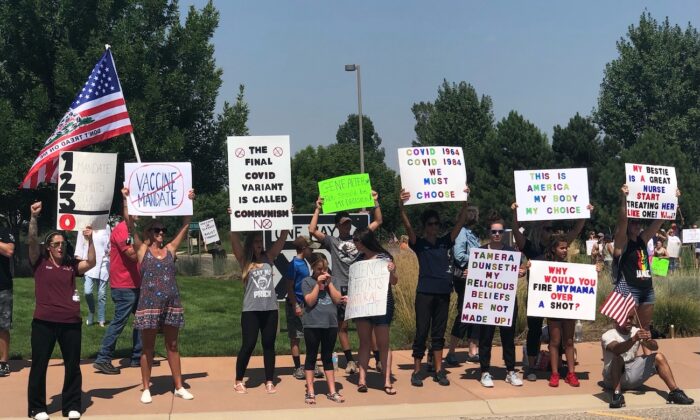 A number of people gather outside UCHealth of the Rockies to protest the health care system's decision to terminate employees who refuse the vaccine in Loveland, Colo., on Aug. 13, 2021. (Allan Stein/The Epoch Times)
AMERICA

More than 250 people from all over Colorado gathered Friday outside UCHealth of the Rockies in Loveland to protest against mandatory COVID-19 vaccines for health care workers.

The rally was the third sponsored by Nurses and Healthcare Workers United, a grassroots organization of medical workers that opposes the vaccine mandates.

“With the announcement of three major area health systems now requiring mandatory COVID-19 vaccines, many healthcare workers are concerned that the rights to medical freedom and bodily autonomy are being eroded and ignored,” the group said in a press release.

“Being threatened with losing your job for not participating in a medical procedure that you do not consent to is not honoring autonomy. We are advocates for our patients’ right to autonomy and now unfortunately we are having to advocate for our own.”

Earlier this month, UCHealth announced it will require employees in its 12 facilities to be vaccinated for COVID-19 by Oct. 1 or be fired, unless they are granted an exemption on religious or medical grounds.

“After fighting COVID-19 for more than a year, and as the dangerous Delta variant has become the dominant strain in Colorado and elsewhere, it is clear that vaccination against this disease is essential to protect our employees, along with out patient and visitors,” said Elizabeth Concordia, president and CEO of UCHealth in a company statement.

Stephanie Thorpe, a registered nurse at UCHealth and an organizer of Friday’s rally, said the vaccine mandate goes against the idea of informed consent and bodily autonomy.

“Part of our goal [Friday] is we wanted to make sure there were health care workers who know they are not alone,” said Thorpe, who opposes the vaccine based on her religious beliefs.

“I just think it’s about the freedom to choose what goes inside your body,” she told The Epoch Times.

Thorpe said she too will lose her job if she isn’t vaccinated by Sept. 30 absent an authorized exemption. The deadline to file is Aug. 27, she said.

“Of course, I’m worried. I like my job. I’m not trying to be difficult, but I have moral objections,” Thorpe said.

Michelle Barron, UCHealth’s Senior Director of Infectious Diseases, said that 90 percent of UCHealth’s 26,000 employees have received the vaccine and that must support the company’s decision to mandate the shots.

“We have a different standard. I feel like we have to be the ones that are the extra level to make sure that everybody is safe,” Barron said in a zoom video to The Epoch Times.

Barron said there is a large body of evidence to suggest that the vaccines are both safe and effective—and necessary, given an increasing number of cases of the Delta variant in Colorado.

“The nursing staff was really happy—most of them,” about receiving the vaccine, she said. “There will always be some with differences of opinion.”

“It was loud and noisy,” Thorpe said of the rally. “A lot of people are fearful that they may not know the long-term effects [of the vaccines], and that’s part of their decision as well. Mine is more because of my religious beliefs.”

Thorpe said many people believe that long-term studies have not been done to show the vaccines are safe and effective.

A growing number of adverse reactions, such as blood clots, among the vaccinated has not helped to allay fears that the vaccines are anything but safe and effective, she said.

“I really don’t believe in any kind of forced medicine. I did kind of see this coming when I saw the whole pandemic coming,” Thorpe said.