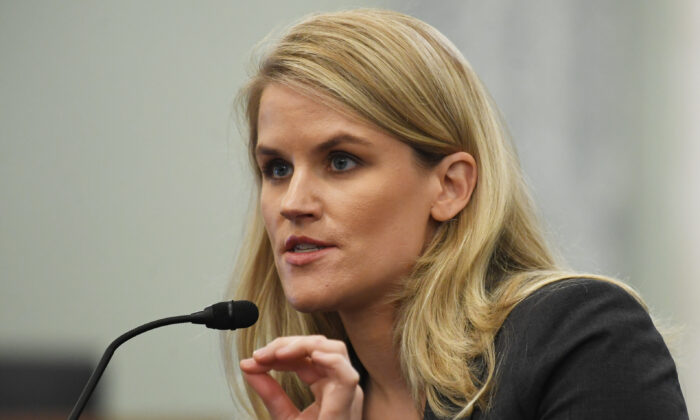 The Senate heard testimony Tuesday from former Facebook employee Frances Haugen, who came before the Subcommittee on Consumer Protection, Product Safety, and Data Security to raise the alarm about practices in Facebook that she said demanded congressional action.

While there was broadly bipartisan consensus that regulations on the social media platform should be strengthened, Democrats and Republicans emphasized different concerns throughout the course of the hearing.

After the hearing, Facebook issued a statement suggesting it was open to having the government “begin to create standard rules for the internet.”

The hearing itself was initially prompted by an exposé by The Wall Street Journal that showed Facebook had hidden research data on the harmful effects of its platform. However, the conversation between Haugen and the subcommittee delved deeper into the company’s practices.

Here are the six key takeaways from the three-hour-long hearing:

Sen. Richard Blumenthal (D-Conn.) immediately identified the stakes of the hearing in his opening statement.

“This is Facebook’s Big Tobacco moment,” said Blumenthal. He compared the revelations about Facebook hiding data about its service to similar efforts by the tobacco industry to hide information that cigarettes caused cancer.

Blumenthal said that “[Facebook] doubled down on targeting children.” Specifically, the senator said that the company was guilty of “pushing products on preteens—not just teens, but preteens—that it knows are harmful to our kids’ mental health and wellbeing.”

Though children aged 12 and under are prohibited from using Facebook and its subsidiary Instagram under its terms of service, often they are able to fly under the radar on both platforms. Haugen said later that the sites’ algorithms can then work to target ads at these children through information it gathers on them even though they are not allowed on the platforms.

Blumenthal cited a claim from a Facebook representative that the information in The Wall Street Journal exposé is “not a bombshell.” He countered, “This is the very definition of a bombshell.”

He said that the documents showed that Facebook executives “value their profit more than the pain that they cause to children and their families.” Haugen nodded to show her agreement with the line.

Haugen said that she had seen internal company documents that emphasized the importance of getting “tweens”—children between 8 and 12 years old—onto the platform. These children can help bring their parents onto the platform, Haugen explained.

“They understand the value of younger users for the long-term success of Facebook,” she said.

Haugen also emphasized at various points throughout the hearing that Facebook’s overarching goal is to get more people onto the platform for longer, as this maximizes their ad revenue. For this as well, Haugen said, children make ideal consumers.

She explained, “I would assume [children are profitable to Facebook] based on advertising for things like television. You have much higher advertising rates for customers who don’t yet have preferences or habits.

In a jab at Facebook CEO and founder Mark Zuckerberg that would be repeated by senators from both parties through the course of the hearing, Blumenthal blasted the executive for not appearing before the Senate and instead choosing to go sailing.

“Mark Zuckerberg ought to be looking at himself in the mirror,” Blumenthal began. “And yet, rather than taking responsibility—showing leadership—Mr. Zuckerberg is going sailing.”

He alleged that Zuckerberg’s “new modus operandi [is] no apologies, no admission, no action, nothing to see here.”

“Mark Zuckerberg, you need to come before this committee, you need to explain to Frances Haugen, to us, to the world, and to the parents of America what you are doing and why you’re doing it,” said Blumenthal.

Sen. Amy Klobuchar (D-Minn.) echoed Blumenthal’s remarks, saying that despite the severity of the accusations against his company, “Mark Zuckerberg is going sailing and saying ‘no apologies.'”

In a rare show of bipartisanship, Republicans and Democrats in the hearing came together to demand federal action against the tech giant.

Both Republicans and Democrats during the hearing put forward their support for abandoning or significantly reforming Section 230 protections for the social media platform. Under a 1990s U.S. law, tech companies are not responsible for the content shared by users on their platforms.

Haugen encouraged lawmakers to move ahead with the action but emphasized that the platforms’ problems could not be solved by Section 230 reform alone.

Beyond reforming Section 230, other suggestions were put forward.

Blackburn said that privacy had been a concern for her since she was in the House of Representatives, where she noted that she had put forward federal privacy laws.

Moreover, Blackburn said that Facebook may be acting in violation of existing federal law, including the Children’s Privacy Protection Act. She said that Congress should look into whether such violations are happening.

“I think it will be this Congress and this subcommittee that will lead the way to online privacy [and] data security,” she posited.

Blackburn also nodded to Klobuchar, a longtime advocate of strengthening and using antitrust laws. The Tennessee Republican indicated that she agreed with these sentiments, suggesting that antitrust may be used in conjunction with new federal privacy legislation and Section 230 reform.

Despite the show of bipartisanship for a solution, Democrats and Republicans are not quite united on the specific nature of the problems.

For years, Republicans and Republican-aligned conservatives have claimed that their voices are unfairly censored by the companies. Such censorship takes many forms for critics, including outright banning of an account, deleting tweets or posts, or “shadow banning” an account, meaning that the account is not banned but its posts are shown only to followers, stunting the account’s growth.

These concerns only grew after Donald Trump, while still the sitting U.S. president, was removed from Twitter. Even some critics of the former president, like progressive Sen. Bernie Sanders (I-Vt.), said that they were “not comfortable” with the move.

Democrats, on the other hand, have emphasized the platforms’ role in spreading alleged misinformation. They say that these platforms have not done enough to crack down on such misinformation. These critics also allege that social media laxity contributed to the Jan. 6 “Stop the Steal” protest, during which a small number of people among the protesters entered the U.S. Capitol building.

These differing approaches to the problems were on full display during the Tuesday hearing.

Klobuchar spoke most forcefully for the Democratic critics, saying that Facebook found that its algorithms “[foster] polarization, misinformation, and hate” but that the company “allowed 99 percent of violent content to remain unchecked on their platform, including lead-up to the Jan. 6 insurrection.”

Sen. Ted Cruz (R-Texas) said during his questions to Haugen that Facebook and other social media platforms had shown “a pattern of engaging in political censorship.”

Even with the general feeling that action is needed, the hearing showed that understanding of the nature of Facebook’s problems continues to divide Republicans and Democrats.

During another portion of the hearing, Sen. Todd Young (R-Ind.) asked Haugen whether breaking up the social media kingpin would solve the problems discussed during the hearing.

While Blackburn and Klobuchar have especially floated the idea, Haugen indicated that she disagrees with any such measure.

Haugen promptly responded, “I’m actually against the breaking up of Facebook.” She explained that such antitrust action would not address the root problems, which she said lie with the artificial intelligence used to power Facebook’s powerful algorithm.

She digressed, “Facebook is the internet for lots of the world,” especially noting poorer regions of Africa as a prime example. “If you go to Africa, the internet is Facebook.”

If Instagram and Facebook were split up, which has been the main thrust of demands for antitrust action, Haugen said that “it’s likely that most advertising dollars would go to Instagram.”

“Facebook will still be this Frankenstein that is altering lives around the world, only now there won’t be money to fund it.”

Facebook immediately responded following the whistleblower’s testimony. In a response to the Senate hearing, the company suggested that Haugen’s credibility was in question, saying she was “a former product manager at Facebook who worked for the company for less than two years, had no direct reports, never attended a decision-point meeting with C-level executives.”

The response from Lena Pietsch, the company’s director of policy communications, continued: “We don’t agree with her characterization of the many issues she testified about. Despite this, we agree on one thing; it’s time to begin to create standard rules for the internet.”

The company’s response reflected Zuckerberg’s previous statements that expressed he is open to action by the government to regulate his platform.

The short response ends, “It’s been 25 years since the rules for the internet have been updated, and instead of expecting the industry to make societal decisions that belong to legislators, it is time for Congress to act.”