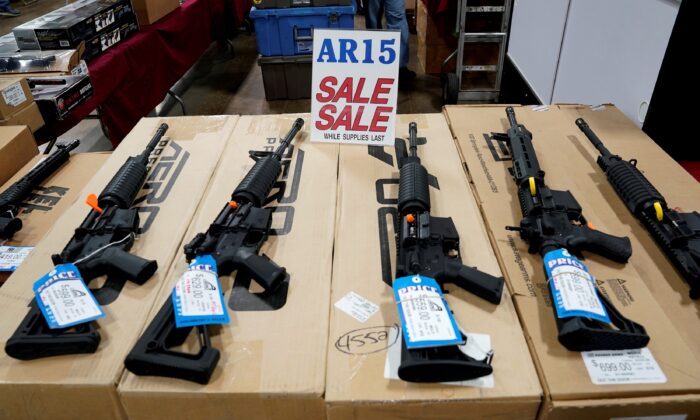 AR-15 rifles are displayed for sale at the Guntoberfest gun show in Oaks, Pa., on Oct. 6, 2017. (Joshua Roberts/Reuters)
Executive Branch

The Department of Justice (DOJ) unveiled on June 7 a proposed rule that would apply regulations for rifles to pistols equipped with certain stabilizing braces.

The rule states that the Bureau of Alcohol, Tobacco, Firearms, and Explosives should determine on a case-by-case basis whether a particular gun, when configured with a stabilizing brace, “bears the objective features of a firearm designed and intended to be fired from the shoulder and is thus subject to the NFA [National Firearms Act].”

“The use of a purported ‘stabilizing brace’ cannot be a tool to circumvent the NFA (or the GCA) and the prohibition on the unregistered possession of ‘short-barreled rifles,'” the proposed rule states, with GCA serving as an acronym for the Gun Control Act of 1968. Stabilizing braces are used to bolster the stability and accuracy of guns.

The proposed rule was published in the Federal Register. Members of the public will have 90 days to submit comments.

Also on June 7, the DOJ published model legislation that it claims will make it easier for states to create laws governing risk protection orders. Such orders—sometimes known as red flag laws—which a number of states have begun to allow in recent years, authorize courts to temporarily bar people from owning or accessing firearms.

Under red flag laws, people—including family members—are able to petition a court to bar gun access by asserting a person’s possession or receipt of a gun will pose a danger or risk to themselves or others. Courts review the application before deciding whether to bar the person from owning or receiving guns.

“The Justice Department is determined to take concrete steps to reduce the tragic toll of gun violence in our communities,” Attorney General Merrick Garland said in a statement. “Today we continue to deliver on our promise to help save lives while protecting the rights of law-abiding Americans. We welcome the opportunity to work with communities in the weeks and months ahead in our shared commitment to end gun violence.”

Mark Olivia, director of public affairs for the National Shooting Sports Foundation (NSSF), a trade group for the gun industry, told The Epoch Times NSSF “will examine the proposed rule and seek input from our members, including firearm manufacturers.”

The NSSF will provide public comment on behalf of the firearm industry at the appropriate time, he said.

The proposed order and model legislation was crafted in response to a directive from President Joe Biden in April. Biden, a Democrat who entered office in January, decried the number of shootings in America and said that the actions he wants to take don’t impinge on the Second Amendment.

The Gun Owners of America, a gun owners group, previously said that Biden’s proposals were unconstitutional.

“Joe Biden knows he cannot beat gun owners in Congress, so instead he’s abusing his executive authority—throwing the full weight of the federal bureaucracy behind his attack on gun owners,” Erich Pratt, the group’s senior vice president, told members in an alert.

Biden and other Democrats have tried to enact new gun ownership restrictions in Congress but have faced Republican opposition. Republicans largely favor other ways to bring down the number of shootings, such as increasing budgets for law enforcement.

However, “new laws are necessary, not just executive initiatives,” he said.