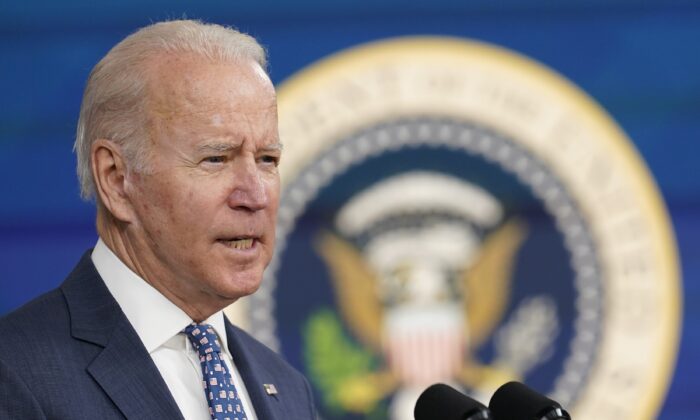 A judge on Tuesday blocked President Joe Biden’s COVID-19 vaccine mandate for federal contractors, finding that Biden likely lacks the authority to force them to get vaccinated.

“This is not a case about whether vaccines are effective. They are. Nor is this a case about whether the government, at some level, and in some circumstances, can require citizens to obtain vaccines. It can,” U.S. District Judge Gregory Van Tatenhove, a George W. Bush nominee, wrote in the 29-page order.

“The question presented here is narrow. Can the president use congressionally delegated authority to manage the federal procurement of goods and services to impose vaccines on the employees of federal contractors and subcontractors? In all likelihood, the answer to that question is no,” he said.

The judge granted a request for a preliminary injunction by the attorneys general of Kentucky, Ohio, and Tennessee.

The White House did not immediately respond to requests for comment.

“This is not about vaccines, it’s about the mandates,” Ohio Attorney General Dave Yost, a Republican, said in a statement. “The judge’s opinion clearly states that and it has been our position all along that the president cannot impose these mandates on the people.”

Biden signed an executive order on Sept. 9 that led several weeks later to the White House requiring contractors force all their workers to get a COVID-19 vaccine unless the worker is entitled to an exception.

Contractors who did not comply with the order, originally set with a Dec. 8 deadline, were poised to lose the government’s business.

The states charged that the vaccine mandate was both illegal and unconstitutional, in part because it was imposed with little regard to “important aspects surrounding the mandate, including but not limited to economic impacts, cost to States, cost to citizens, labor-force and supply-chain disruptions, the current risks of COVID-19, and basic distinctions among workers such as those with natural immunity to COVID-19 and those who work remotely or with limited in-person contacts, among other aspects.”

The government disagreed, arguing that the president does have authority to regulate contractors under the Federal Property and Administrative Services Act because. Courts have ruled the president can pursue “efficient and economic” procurement, which he was in the order, lawyers asserted.

Van Tatenhove sided with the states.

Defendants, he said, failed to point to a single instance when the services act was used “to promulgate such a wide and sweeping public health regulation as mandatory vaccination for all federal contractors and subcontractors.” He also expressed concern that the mandate “intrudes on an area that is traditionally reserved to the States,” citing the Tenth Amendment of the Constitution.

A preliminary injunction means the mandate is blocked for now in the three states, with the possibility of becoming a permanent block or eventually being allowed to take effect.

A preliminary injunction has already been entered against the Biden administration’s health care worker vaccine mandate and a similar mandate for private businesses.