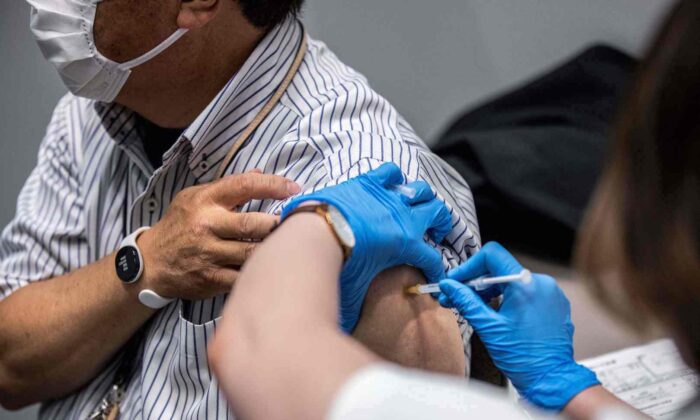 Japanese authorities suspended another 1 million doses of Moderna’s COVID-19 vaccine on Aug. 29 at distribution centers in two regions over contamination concerns, according to local governments.

The latest suspension comes a day after officials reported that two men in their 30s died after receiving doses from other tainted Moderna lots placed under investigation—around 1.63 million doses—earlier this month.

Okinawa, a Japanese prefecture made up of more than 150 islands, announced in a statement that it had suspended the use of Moderna COVID-19 vaccines at a major vaccination center in the city of Naha, The Japan Times reported.

“We are suspending the use of Moderna COVID-19 vaccines, as foreign substances were spotted,” Okinawa officials said.

The Japanese Ministry of Health requested distribution centers to not use the suspended lots that were shipped to more than 800 centers nationwide.

The country’s health ministry said some of the incidents may have been due to needles being incorrectly inserted into vials, breaking off bits of the rubber stopper.

Moderna previously described the contamination reports as a “particulate matter” that didn’t pose a safety or efficacy issue.

The U.S.-based drugmaker and Takeda Pharmaceutical said in an Aug. 28 joint statement that they’ve been notified of the deaths in Japan, calling it a “tragic event” and adding that there’s currently no evidence that the jab caused those deaths.

“At this time, we do not have any evidence that these deaths are caused by the Moderna COVID-19 vaccine, and it is important to conduct a formal investigation to determine whether there is any connection,” the companies stated.

The deaths of the two men, aged 30 and 38, occurred in August. They both suffered from a fever the day after getting a second dose from one of the suspended lots, with each dying two days after that.

As of Aug. 30, 15,969 Japanese citizens have died from COVID-19 since the start of the pandemic, according to health officials. A large part of the country has been placed under strict measures in response to the CCP (Chinese Communist Party) virus, which causes COVID-19.